I love magpies. If I had a 'daemon' (as in His Dark Materials), it would definitely be a magpie as I identify strongly with their love of shiny things and their look-you-in-the-eye cheekiness. Yesterday I opened the Guardian Review section and felt a stab of jealous rage when I saw this headline: "I save everything: envelopes because of the patterns they have inside; fabric from my childhood and from jumble sales". It was the opening of a piece on illustrator and writer Lauren Child, who I do think is brilliant, but I just wanted to shout, "Yes, dear, you and me and thousands of other people! You're not that special!" Meanspirited, I know. But the magpie in me is very competitive. In a future post I will feature some of the things I've picked up off the ground and which I now count as treasures.

In fact this small painting features some found shiny things as well as a painted found image, to suggest the magpie sensibility at work.
I was brought up to curse single magpies and I still do this even though I don't hate them and don't wish them ill at all -- but it's deeply ingrained in me to mutter the following curse:


"Evil be to thee
Good be unto me
Get thee gone where thee should be"
Sometimes my lips hardly stop moving on my drive to work, there are so many magpies strutting by the side of the road. I thought this curse must be fairly well known, at least up North where I come from, but there's no mention of it online. I'm intrigued! Perhaps someone in my family made it up and it's only us that's been saying it for the last umpteen years. I've taught my daughter to do it now, and I hope it catches on with other people.
In spite of my constant cursing of him, the magpie that hangs out in the car park at work brought me a gift. This is him (quite hard to catch a picture of him):

He put this fabulous (gross!) ring in the top of the hedge for me to find: 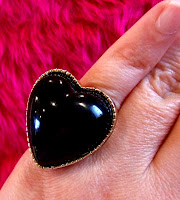 Thank you Mr Magpie! I treasure it.
There's all sorts of folklore surrounding magpies and I won't try to regurgitate it all here, just some choice snippets. In Mongolia, magpies are believed to be in control of the weather. In Somerset, it's thought that carrying an onion will protect you from the magpie's malign force. My first flatmate used to have to look at a magpie through three different windows in order to defuse its power, which meant she would often be seen jerking around like a crazy thing if we went out in the car.

On the etymology side of things, the strange practice of 'pica' -- eating things that aren't normally considered food, such as chalk or sand or earth (and a whole lot of other nasty substances) -- is named after the Latin name for a magpie, which is not only omnivorous but will also pick up objects fairly indiscriminately (yet not eat them, one hopes). The word 'gazzette' for a newspaper also comes from a word for magpie: "gazza" in Italian, so a newspaper was a 'little magpie', possibly because it contained a lot of chatter. Or maybe because it was black and white? 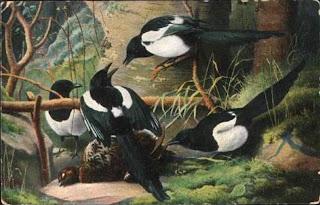 If I see two magpies together, I say, '"Good morning, Mr Magpie, good morning Mrs Magpie, how's your daughter, how's your son?" which takes so long that they're usually about a quarter of a mile down the road by the time I've finished. If I see a little flock, I get terribly excited. The other day I saw six ("for gold"). And in fact that same day or the day after I found a pound coin on the floor and became convinced the luck of the magpies was with me. So I bought a lottery ticket with the coin (I never normally buy lottery tickets) and waited for the jackpot to be mine. Well, it didn't quite work out as I got ZERO numbers. But, as someone pointed out, the magpie's prophesy had already come true when I found the gold coin. So there.

We have huge amounts of magpies here. They are exceedingly clever. One year they were letting themselves into our (then) duck house to steal food. One would stand guard in a large nearby tree whilst the other "did the deed". I am also a magpie in terms of collecting "stuff".