On Sunday I went to Frieze Art Fair -- on my own as it turned out, instead of the four of us, as various commitments clashed. So I had two spare tickets (children under 12 go free, over 12 full price). Any tentative thoughts of trying to sell them to someone else soon vanished as there was no queue in which to strike up a friendly chat with anyone. As soon as I hesitated on the threshold of the entrance first one and then another smart, quietly spoken security person came up and asked me if there was a problem. I just thought, 'Sod it!' and walked in, making mine a very expensive ticket.
I decided to enjoy my triple-priced day out as if I were a person to whom the cost didn't matter. The truth is that when we've been en famille for the past two years, the kids have got tired and bored before me and we end up leaving sooner than I'd like. This time I spent four hours drifting up and down the endless aisles of gallery cubes and I'm sure I saw virtually everything. It's absolutely vast -- just the best contemporary art exhibition you could wish for, and amazingly stimulating. 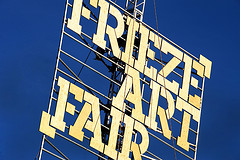 This year my impression was that German art was dominant. I don't have a problem with that as I think modern German art is marvellous and possibly a little underrated, on the whole, in this country.
The sculptures out in Regents Park didn't wow me as much as in previous years. But I enjoyed seeing the 'deconstruction' of the big heap of rubbish (Wolfgang Ganter and Kaj Aune’s Trash), when a man opened the door of a derelict fridge at the back of the heap and climbed inside. Leaving the door open, you could see there were actually two people inside, and they were pulling ropes to make the dustbin lids bang rhythmically on the outside. It was quite like the revelation of the real Wizard of Oz.

One of the great things at Frieze is people-watching. On Sunday the posh couples were out in force, with their trendy buggies storming up the aisles like tanks, babies strapped inside them in what looked like very hot, very expensive cashmere and angora babygro's. A toddler made a beeline for a chunky nativity set (part of an installation), but was rugby tackled to the floor by his dad only a split second later and the wooden shepherd he had grabbed was hastily replaced. A gallerista seemed enchanted by a beautiful little girl and played peekaboo with her around a sharp-edged sculpture. It was a good place for children as so many of the pieces were childlike and naive. There seemed to be less in-your-face pornographic pieces this year, which was probably a relief to parents.
It was while I was sitting watching people pouring in at around 2pm that I decided that, far from sneering at these art-lovers with their 'badges' of art-loving-ness, their perky hats and fringed socks, their ballooning romper suits and Harlequin tights, I should really like to mark myself as more like them. I would like to wear, say, a little cape made entirely of feathers, or a shift made out of an original Ecuadorian cocoa-bean sack. But you have to be thin or you just look grotesque, so I've made a note in my sketchbook to dispense with one-third of my body. If only thinness could be achieved by hacking off a limb. The message is 'eat less, create more'.
There was so much art to take in, impossible infinities of painting and sculpture, and all laid out like a hall of mirrors; it was hard to tackle it logically. I saw so much that I liked, but I only made a note of a very few pieces. When I find an artist whose work I haven't been aware of before, it's easy to imagine that they must be very young, new to the scene, but of course it's usually me who's new, and under-informed. So these artists I felt I 'discovered' on Sunday are actually well-known, mature artists with books and international shows under their belts. It doesn't matter, I still felt the excitement of discovering something new that I really liked.

Ion Grigorescu is a Romanian artist, born in 1945, who was disapproved of by the repressive regime of Ceaucescu. In an interesting piece in online magazine Plotki, Grigorescu explains that it was subversive to blow up his old family photos and paint over them because, under the Communist dictatorship, photography was supposed to show the objective truth, so the paint undermined this certainty.
My other 'discoveries' were Suzanne Treister, Marcel Dzama and Stan Douglas.
Suzanne Treister was showing an installation about ex Head of MI5, Stella Rimington, which included beautiful pencil drawings based on photos:

Marcel Dzama had made, among other things, glass cases full of cut-out and painted performers which almost gave the effect of a peepshow. I loved the intimacy of the pieces and the restricted palette.
Finally, I love this big photo of an 'Olde Curio Shop' by Stan Douglas: 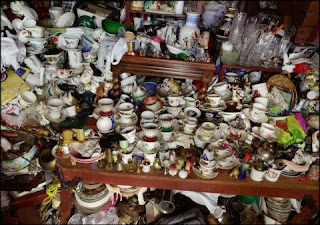 You really need to see the actual photo (which is about 2m x 1.5m) to get the full, gorgeous effect.
So I came home determined to make more art, to be less buttoned up about it, to experiment more and just try to get going with something that excites me.
Posted by Jane Housham at 22:48

That Romanina artist is doing very much what you have been doing with old photos (a.k.a. "colouring in")! The nearest I have been to Frieze was watching it on The Culture Show. Glad that you were inspired by it. These days I often find myself put off by seeing other people's art. I feel frustrated and adequate. Definitely says more about me than about the art!