Can I find my Irish ancestor Jane? -- short answer, no


I was very kindly given a review copy of Tracing Your Irish Family History on the Internet by Chris Paton (Pen & Sword Books, £14.99). I decided to review it by using it to see if it could help me solve the biggest mysteries in my own family tree: what was my 4x great grandmother's maiden name and where did she come from? All I know is that she was also called Jane (like me) and came from Ireland. 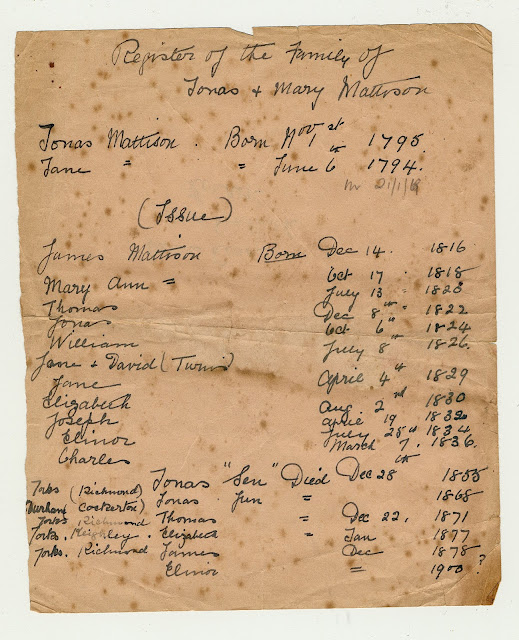 This document was written by my great grandmother, Julia Mattison -- she was only a Mattison by marriage but she was very keen on the Mattison family history. We were a family very much rooted in Richmond, North Yorkshire, where I also grew up. Earlier generations of the family lived up Swaledale, at Thoralby. We were not wealthy by any means but we were artisans for the most part (or the men were): stonemasons, iron workers, shoemakers, upholsterers. Great granny Mattison ran Mattison's Bazaar, a department store in Richmond marketplace, and her husband John, who was a tinsmith, made pans and kettles and so on which were sold in the shop alongside 78rpm records, toys, china, pens, you name it. She also ran a lending library from the premises. 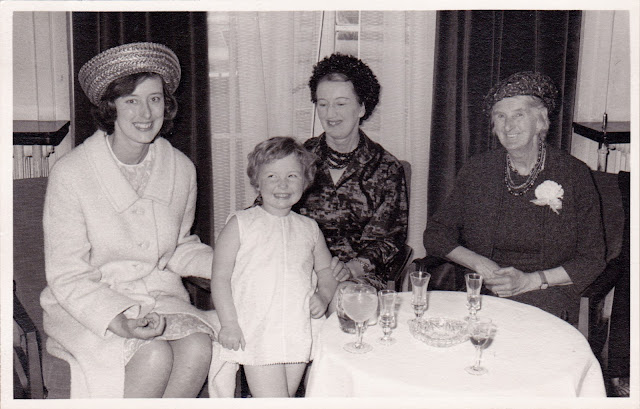 This photo shows four generations of our family: Great granny Mattison on the right (writer of the document above), her daughter (also called Julia) in the middle, my mother on the left and me aged three.
Anyway, to get back to the question in hand, I only know about my 4x great grandmother Jane from my great granny's document. Jane was born on June 6 1794. I've established (from several census returns) that she came from Ireland, but I don't know where in Ireland or what her maiden name was.

This is an extract from the 1841 census, which records Jonas and Jane living on Castle Hill in Richmond (Yorks) with six of their children (in total I believe they had twelve children, although one or two died in infancy). The 'I' in the right-hand column of Jane's entry stands for Ireland as the place of her birth. Jonas was a stonemason. The date of Jane's birth according to this census would be 1801, which doesn't tally with the 1794 on our family document. I'm more inclined to believe the latter -- on census returns people often rounded their age up or down to the nearest 5 and it looks as though both Jonas and Jane may have done that in this instance. 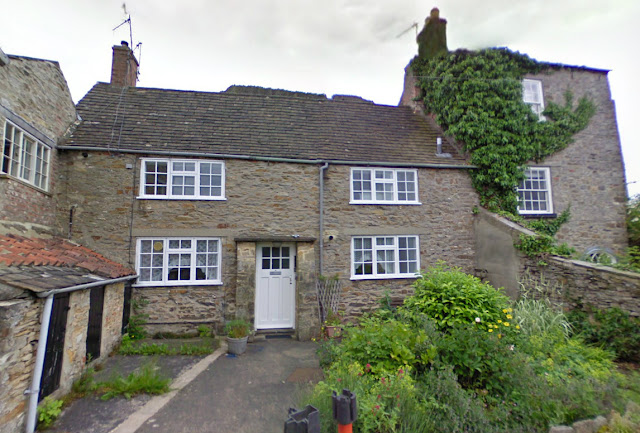 Jonas and Jane lived in this cottage on Castle Hill. According to the census, eight people were living here in 1841, half of them adults.
To cut a very long story short, that's pretty much all I know about Irish Jane. Without her maiden name it's nigh on impossible to find her in Ireland. Chris Paton's book is an excellent resource which lists a vast number of Irish genealogy resources along with pointers on how best to use them, but no resources in the world can find an unknown 'Jane'. On Ancestry, I managed to draw down a list of 'Janes' born in Ireland at the end of the eighteenth century but, without other clues, it's impossible to know whether any of them is my Jane. There's no record (that I've found) of Jonas and Jane's marriage either in the UK or Ireland (UK more likely, I think, as Jane probably emigrated to England or Scotland as a young woman) and perhaps they never formalised their relationship. Who knows?
Sometimes you just have to let these things go. Perhaps one day someone else on Ancestry will pin Jane down and I'll be able to borrow their findings. For now, I'm going to leave well alone.