Away BACK To Lamorna

We've just come back from a week in Cornwall and there's a little bit of a story to why we stayed where we did. It only seems like a couple of years since we were last there, but I see from my blogpost about it that it was April 2012! That first time, we stayed in the second house from the left in the terrace (above), but we saw that the next-door house was much nicer than the one we were in. Through the large bay windows we couldn't help but notice beautiful paintings on the walls, stacks of lovely china in the alcoves and attractive furniture. In fact we even found ourselves at an auction on the same day as next-door's tenants (at David Lay in Penzance -- very good) and later we saw all their beautiful purchases laid out in their window (this made a strong impression on me as success at an auction is something I value highly). It turned out to be possible to rent that next-door house for holidays and so this time it was us in the beautiful house, which we now know is called Cove House.
In the comments book, someone had described the house as 'Kettles Yard by the sea' and it certainly has that flavour. There's enough modern stuff to enable life to be lived more or less as normal (hot water, big cooker, small TV and so on) but otherwise one feels one has passed through a membrane into the past. 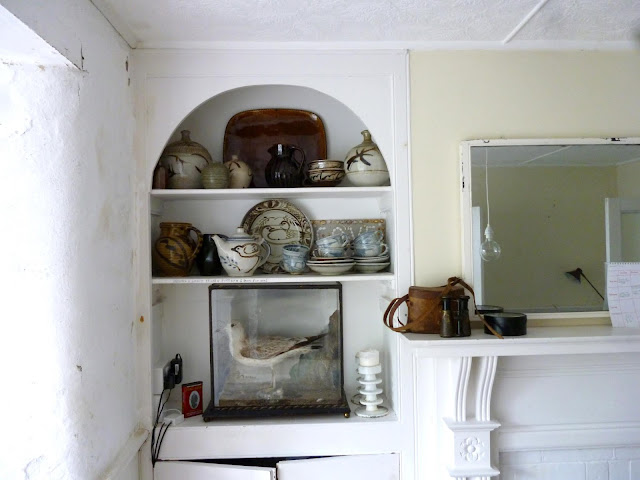 I liked the old flags used as curtains in the bathroom and the stacks of chunky Portmerion mugs with Bewick prints on them in the kitchen. 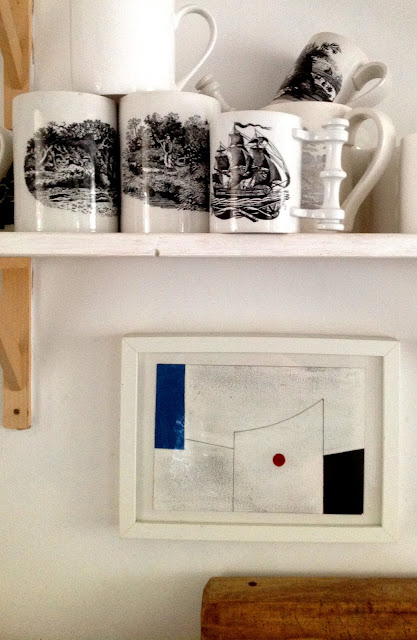 There was a wonderful lamp with prints clipped to the shade -- too frail to use but splendid to look at:
My favourite object in the house was this strange little figure: 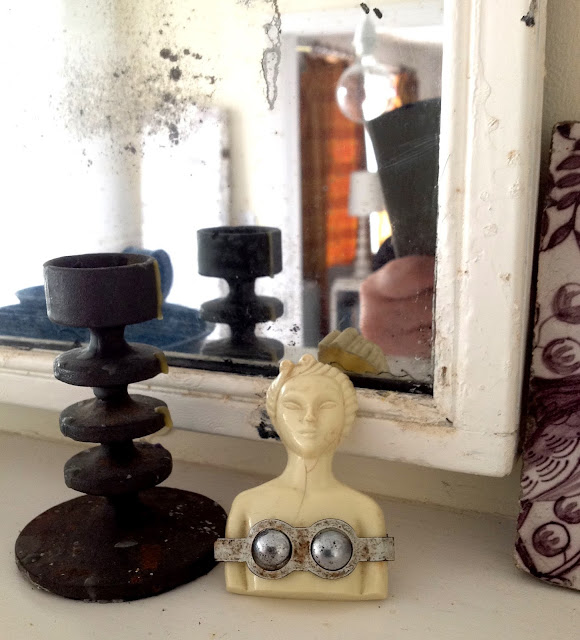 There was a brand name on the back, or perhaps it was even a marketing slogan, but I forgot to make a note of it. If anyone knows anything about her mysterious ballbearing anatomy, please leave me a comment about it.
The best thing about Cove House is really its location, right down by the sea in front of the little harbour (and, necessary evil, the car park) at Lamorna Cove. You can have your feet in the sea in half a minute, or you can be sitting in the little enclosed garden in even less time. The sea performed a full repertoire for us, from emerald calm to silvery seething to foamy waves -- always mesmerising. 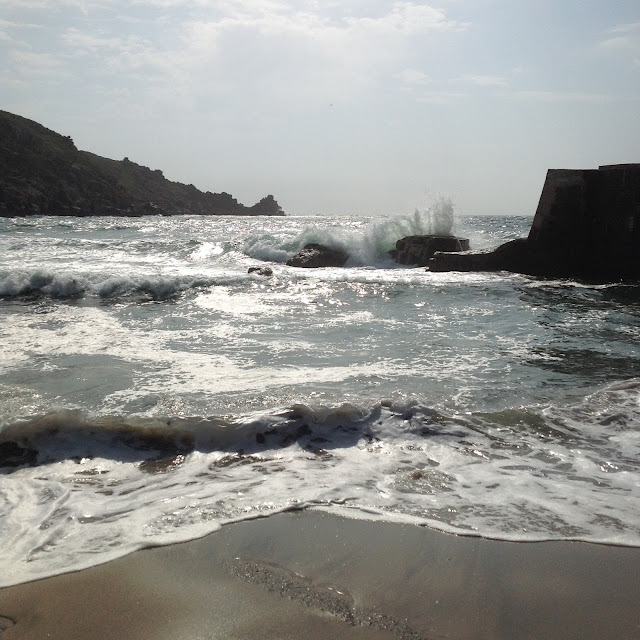 The whole of the Cove is privately owned and changed hands recently, causing some anxiety. Parking is very strictly overseen, although a parking place comes with the house booking (plus another one in the tiny garage, if you should happen to drive a miniature car). I have very fond memories of having the crab and fish soup at the cafe decades ago when I spent two Christmases in St Ives with my mum -- they still serve the soup but the bowl of it that I had this week wasn't the splendid rich concoction of memory (and some reviewers on TripAdvisor seem to agree with me). But times change. As do I -- against my better judgment, here are a couple of photos of me from the first time I went to Cornwall, in the mid-Eighties. Note the legwarmers...
On one of the front windows of Cove House is a little notice, part of the advertising of it as a holiday rental: 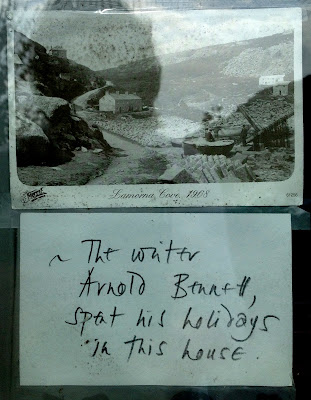 This intrigued me greatly. I adore Arnold Bennett's Potteries novels and it was exciting to think that we were staying in a house he once stayed in -- although having tried to psych myself up to a pitch of 'resonance' with AB, I decided in the end that it's impossible to get a real sense of a person's presence from being in a place they once were. Still, he probably slept in the same bedroom and looked out at the very same view. I decided, as soon as I got home, to try to research his visit (or perhaps visits) in more detail. Stop here if you don't want to wade into a long episode of sleuthing...
In the postcard on the window (above), which is dated 1908, Cove House is not actually there. To begin with there were only three houses in the terrace -- Cove House was built later. You can see that the building materials are a little different in the earlier photo of the house exterior. And the little extension was built later still. This is borne out by comparing this map, from the decade of 1900-1910...
...with this one from the 1960s:
Alas, I haven't found a map for the decades in between so can't pinpoint exactly when the house was built. It was probably between about 1910 and 1920, I think.
Here's an old photo of Cove House before the garage extension was built: 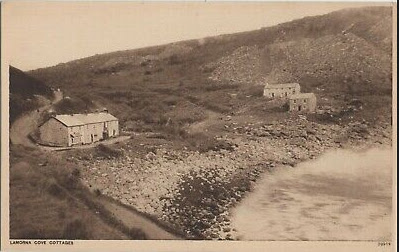 Now here's a postcard from the Sixties, with the garage now added: 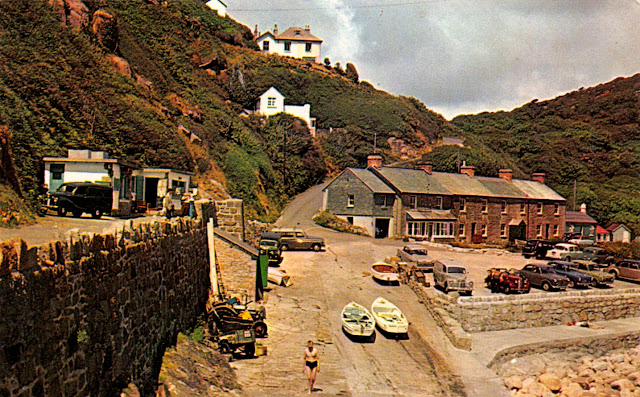 The whole cove had been developed by this stage, with a car park, sea wall and slipway. The cafe has been created on the left as well. But I think that Cove House was perhaps also run as a tea room in the 1930s.
In her biography of Arnold Bennett of 1974, Margaret Drabble says that Bennett came down to Cornwall for a six-week stay in July and August 1930, right at the end of his life (he would die of typhoid from drinking tap water in Paris the following March). He came with his partner, the actress Dorothy Cheston -- they don't seem to have brought their four-year-old daughter Virginia with them. He had just finished his last (full) novel, Imperial Palace, an epic contemporary story built around the running of the Savoy Hotel. Bennett was a celebrity and there was interest in where he had chosen to spend his holiday:
Shortly after Bennett's death, this letter appeared in the Staffordshire Sentinel (27 April 1931): 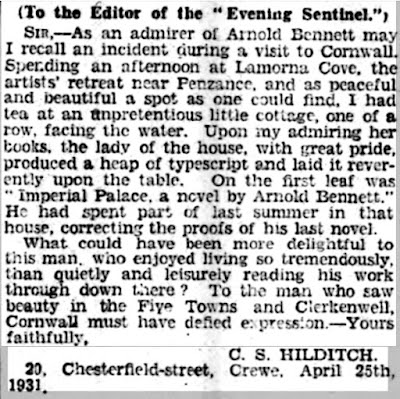 It's this letter that makes me think that Cove House functioned as a tea room -- the 'unpretentious little cottage, one of a row, facing the water'. As a publisher myself, it's exciting to imagine Bennett sitting in our holiday cottage correcting his proofs!
Although Imperial Palace was Bennett's last completed novel, when he returned to London in September (following a short cruise on a friend's yacht), he began another novel, Dream of Destiny, which he would not finish. In this, he has a character declare:

And in a letter from Cornwall to his nephew Richard, Bennett wrote, 'On the whole, this is certainly the best English holiday I have ever had, and one of the very cheapest.' He went on: 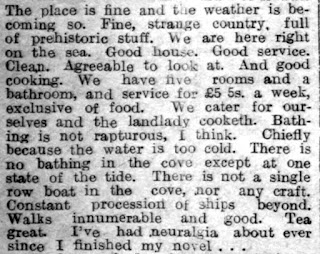 Later in the holiday, at the end of July 1930, the couple moved up to Trewoofe (pronounced 'Trove'), a comfortable house at the top of the lane that leads down to Lamorna Cove, owned by the Shaws. Their daughter was the excellent painter Dod Procter.
Bennett's final verdict on his Cornwall staycation (which, as far as I know, was his only visit to the county) comes in a further letter to his nephew: 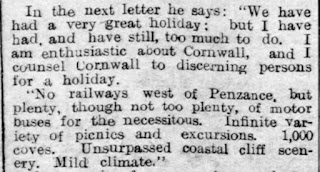 And I agree with every word of that.

If you'd like to stay in Cove House yourself, you'll find all the details here: http://www.lamornacovehouse.com/ (btw, none of the above is intended to 'advertise' the house, it's just written out of my interest in a lovely place!)
Posted by Jane Housham at 20:43