David and I love going to auctions and bidding on job lots of stuff, mainly ceramics and glass. We take our boxes of heaped-up objects home and then really enjoy sorting through it to see what's of interest. Cleaning dusty old things until they sparkle again is very gratifying. 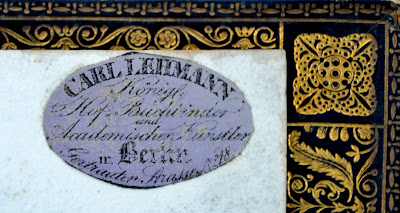 A couple of weeks ago I bought a box of bits and pieces because I had spied two interesting-looking books in it. They are both heavy, leather-bound albums, tooled in gold leaf. The dark-brown one has silk panels on the inside of the covers and a bookseller's sticker (above) from Carl Lehmann's shop in Gertruderstrasse, Berlin.
The red book is a sketchbook. Most of the pages have been torn out or the sketches taken out of their mounts and only two pencil sketches remain, neither of very much interest. But the other book, a scrapbook of prints which has also had many items removed from it, still has lots of lovely things in it. Both belonged to Georgina Pigott. Her name is written in both of them in her own hand (the sketchbook has her signature in it twice (once her maiden name and once her married name -- helpfully!) and the scrapbook has an inscription in the same handwriting):
A gift, then, from a friend. Mrs George Pollen was born Elizabeth Primrose Hall in 1797 and married George Pollen Boileau-Pollen in 1824. She died in 1873. But, more importantly, who was Lady Pigott? She turns out to have a fascinating background.
She was born Georgina Anne Brummell on 8 August 1802 at Donnington Grove house in Berkshire. Donnington Grove is the most exquisite 'Strawberry Hill Gothic' house built in 1763, now a hotel. I would love to go and see what it's like inside. The Brummells moved there in 1783.
The Brummell family were clearly wealthy, but they had come by their money in a very unusual way. Georgina's great grandfather, William Brummell (1709–1770) was a very ordinary man, but he had the good luck to be employed as a valet by Charles Monson, the MP for Lincoln in the mid 18th century. Proving to be a very good servant, by 1746 he was able to marry Jane Garrett. They lived in Mayfair on the corner of Bury Street and Jermyn Street. They had two sons – William (known as ‘Billy’, Georgina's grandfather) and Benjamin – and a daughter Mary. Occupying only the ground floor of their house, they let the floor above to Charles Jenkinson (1729–1808), the MP for Cockermouth, and he gave William’s son Billy a job as a clerk in his office when he became Chancellor of the Exchequer. Then Lord North took over the post in 1767 but kept Billy on as his private secretary, even when he became Prime Minister in 1770. By such a chain of events the family gained prestige and in 1769 Billy married Jane Richardson, the youngest daughter of the Keeper of the Lottery Office.
Billy’s position as Private Secretary to the Prime Minister came with a grace-and-favour apartment in Hampton Court Palace. He and Jane had three children, Maria, William (Georgina's father, born in 1777) and George Bryan (born at No 10 Downing Street in 1778). He moved in smart circles and was friends with the playwright Richard Sheridan (1751-1816) and Sir Joshua Reynolds. Reynolds painted this portrait of Billy's sons, William and George, and it was exhibited at the Royal Academy in 1783:
In 1783 Billy bought Donnington Grove, near Newbury, Berkshire, but within a decade both he and Jane died within a year of each other, in 1793 and 1794 -- Billy's legacy was divided equally between his three children and in 1800 his eldest son William married Anne Daniell, who had been born in Cuddalore, India in 1778. Meanwhile Billy's other son, George, Georgina's uncle, was becoming one of the notorious figures in Regency England -- had you already guessed? Having gone to Eton and then to Oxford, he became known as 'Beau' Brummell for his peerless dandyism.
He is credited with revolutionising men's fashion by dressing in full-length trousers rather than breeches and stockings, setting a trend for tight-fitting jackets and, above all, for making elaborate cravats all the rage. He used his personality to overcome snobbery at his 'vulgar' family roots, rising to the heights of London society -- before tumbling all the way down again after being ruined by gambling debts and syphilis.
It may have been to distance themselves from Beau Brummell's notoriety that his brother moved his family to Wivenhoe House near Colchester, Essex in 1811. By that date William and Anne had two daughters, Frances Amelia (1801-1862) and Georgina Anne (1802-1886). Georgina Anne is the owner of the album and sketchbook. In the sketchbook there's a page entitled 'Wivenhoe House Feb 10, 1841' but sadly the picture itself is missing. The house itself is no longer standing -- it was dismantled in about 1861 and the land divided into plots for around 80 houses, which now make up the centre of Wivenhoe. It shouldn't be confused with the Wivenhoe House that stands in the grounds of the University of Essex and is run as a hotel. If anyone is interested, this is a very interesting article about the various big houses in Wivenhoe. And Pat Marsden's other articles on Wivenhoe history have also been very helpful for this blogpost.
The first print in the album is local to Wivenhoe, it's headed 'Bere Church', but what must have been a village is now subsumed by Colchester. Perhaps this is somewhere the family liked to walk to from their home -- it looks as though there would have been a nice riverside walk to get there.
Georgina got married in 1831, when she was 29 (relatively old for those days). She married a baronet, Thomas Pigott, and they lived at Denston Hall in Suffolk.
I think she may have passed her timing sticking prints into her album before she got married and started having children, because I've been able to date most of the prints to the 1810s and 1820s. Such as this print of the actress Elizabeth Billington.
Or this little print of my hometown, Richmond in Yorkshire. I wonder whether she went there? 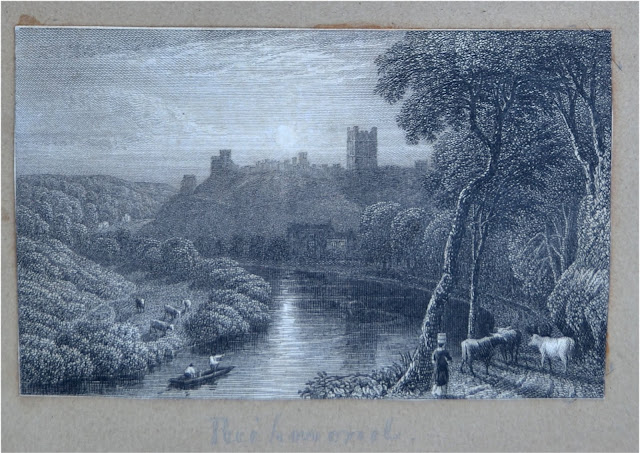 Georgina seems to have shared the period's interest in exotic expeditions as there are a number of prints of 'primitive' peoples such as these 'Tunguse' priestesses:

I'm not particularly interested in engravings as a rule, but looking at this album it's hard not to be charmed and impressed by the beautifully delicate detail. Here are a few more: 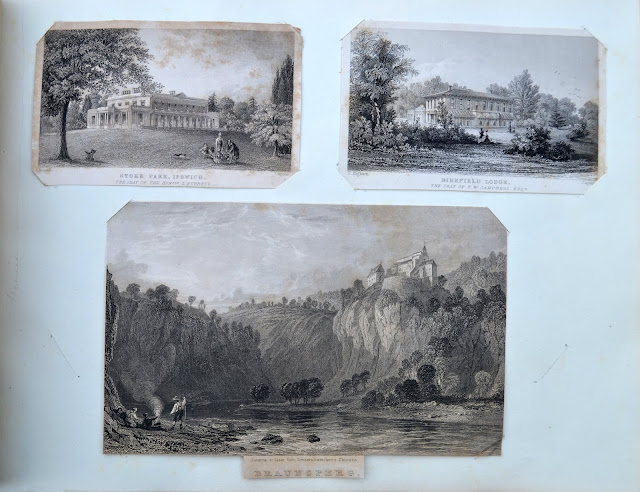 I especially like this page of tiny engravings, which remind me of the miniatures made by Thomas Medland (1765-1833) for Peacock's Polite Repository. I only know about these because I had to look through them for a recent book on Humphry Repton that we published at work. 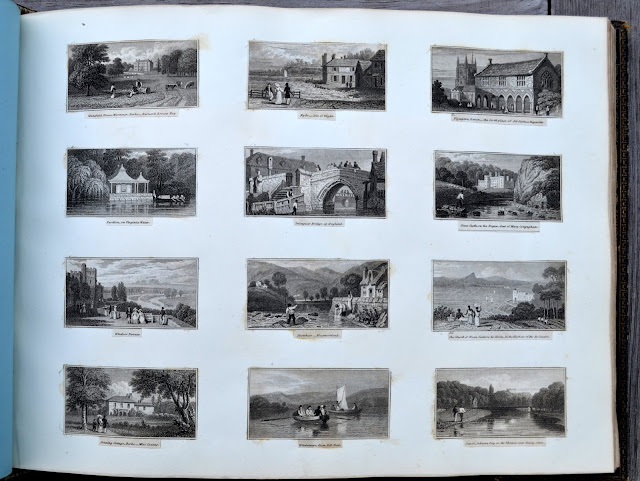 Here's one closer up: 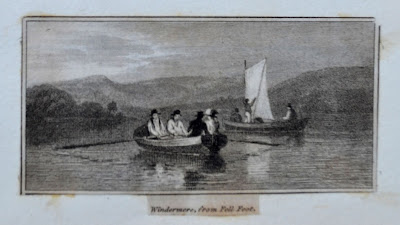 I'm hazarding a guess that this picture, in such lovely colour, was painted in by Georgina herself: 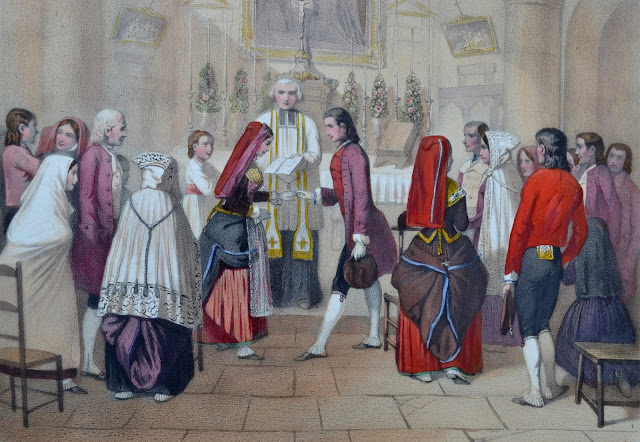 I feel that something of Georgina's personality comes through the images she so carefully curated in her album. I haven't been able to find a picture of Georgina herself nor very much about her life. Georgina and Thomas had two children, as far as I know -- Charles Robert, born in 1835, and Mary Elizabeth, born in 1837. Unfortunately Georgina's husband Thomas died at the age of 50, in 1847, leaving Georgina with the children to bring up alone. She probably had enough money to live in comfort, though. She remarried in 1855, a John Frederick Baillie, who had gained Ley's Castle in Invernessshire through his previous marriage. I don't know if she ever lived in the castle -- I think there may have been some unhappy circumstances because John died in Flemings Hotel in Half Moon Street, Piccadilly in 1865 and it doesn't seem as though Georgina inherited anything from him. (Flemings is still a hotel!) She lived on into considerable old age and when she died at the age of 84 in 1886 she was living in Richmond, Surrey with her spinster daughter Mary Elizabeth. Georgina only left £652 so had perhaps had to eke out her savings all through her widowhood. Interestingly, even though she had left the Pigott family when she remarried, she was buried at Dullingham near Newmarket, where her nephew Christopher Pigott lived in the big house.
I've saved the most interesting thing about the album until last. There is a photograph between two of the pages. Georgina lived largely before photography was invented and the photo clearly dates from much later, after Georgina's death: 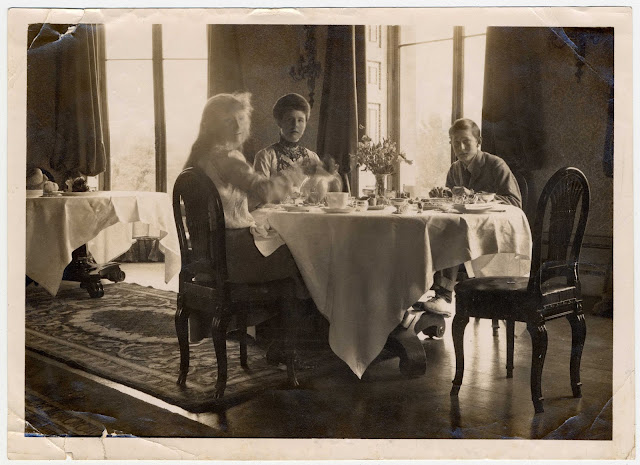 I should say that the original photo has been scribbled on by a naughty child, so above is my slightly cleaned up version (via Photoshop). The original looks like this: 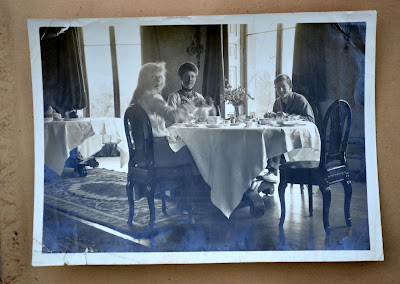 I believe I've worked out who is in the photo. Georgina's son Charles Robert married and had two children, a boy and a girl. The boy was Charles Berkeley Pigott, born in 1859. He married Fanny Ada Pigott (incidentally his cousin) in 1886 and they had two children, Florence Ada Cecile Pigott, born in 1890 and Berkeley Pigott, born in 1894. Charles Berkeley Pigott died prematurely, aged 38, leaving Fanny a widow with fairly young children, just as Georgina had been. I think this photo shows the widow Fanny with Florence and Charles at their home, 'Broadlands' in Brockenhurst, Hampshire, probably around 1905-8, to judge by the children's apparent ages. It looks as though they're having breakfast. Charles Berkeley Pigott never became a baronet, because he died before his father and the title is passed on at death. But the boy in the photo became the fourth Baronet Pigott when his grandfather (Georgina's son) died in 1911.
I think the album must have stayed in the family for generations but finally found itself in a box of nothing very much in a provincial auction sale -- at least now that I've got it, I will extend its life a little further.
Posted by Jane Housham at 16:48

Just sat down to eat my breakie and have a brief wander through blogs, a bit of inspiration before the say starts and you have made me switch the computer on to write this! I read blogs on my ipad but for some reason I cant comment on your blog with it. I wanted to say how much I am in awe of your research stories, I read through you book and your current work on Lady Piggot and each time I have been gripped. I have followed your blog for years after first receiving a piece of your work through the Postmans Knock project and yours is a piece I still have. The depth to your writing is immersive and so enjoyable. You make me want to go and do it! I can see they take time to put together and I can still recall some of the postcard trails you have done in the past. How often does a story you read on a blog stick with you and yours stick with me. thanks for taking the time to post you adventures into research.
Keep well.