Vera Lynn: One of the boys?

I decided to give my true-crime novel set in 1946 a Vera Lynn song as its title before I had ever actually heard the song in question. The tune, "Don't You Ever Cry", features in the story because it's sung at a talent competition in 1940 by a character whose funeral opens the narrative. It struck me that the four words of the song's title had an intriguing ambiguity (is it an instruction or a question?) which could be applied to the book's narrator, Jean. Jean goes through a great deal of intense emotional upheaval and distress in the course of the novel but is at pains to hide her emotions -- in particular, not to cry. In a sense, the deeper business of the book is to explore why that is. What has happened to her in the past that has, to a degree, locked up her heart? 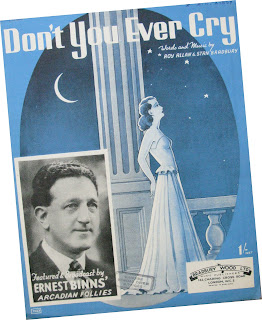 When I was fully into the writing, though, and really trying to get in touch with the period, I decided I must hear the song I'd named the book after. "Don't You Ever Cry" is fairly obscure as Vera Lynn's recordings go, but I was able to buy it on a double CD, Sincerely Yours, Vera Lynn. The song turned out to be wonderful, with a fabulous big-band arrangement (from Ambrose and his Orchestra) and in fact the whole album was an absolute revelation to me. Previously I had not really known Dame Vera's music, although she recorded many glorious belters that I know anyway, such as "Jealousy", the gorgeously passionate 1925 song by Jacob Gade with its tango rhythm -- this is the song that my Granny would always be banging out on the piano when I arrived at her house with my Mum and Dad and a package of fish and chips on almost every Saturday lunchtime of my whole childhood. You could hear her crashing through the chords and singing at the top of her voice before we even opened the front door of her small house in Darlington.
I'd always thought that Vera Lynn's music would be rather stiff and clipped but I actually love her versions of the great standards. Her recording of "A Nightingale sang in Berkeley Square" is perfect: clear, 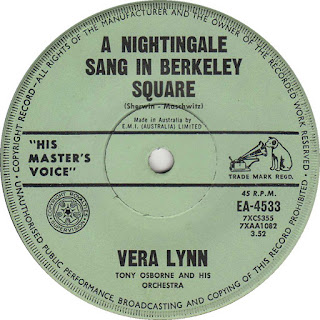 innocent but beautifully lilting -- you believe absolutely that she has fallen in love on a romantic Mayfair evening. And her rendition of the Inkspots' classic, "If I Didn't Care" is the best version of all those I've been able to find online. I even prefer it to the original. Vera adds just the right amount of yearning to lines such as '"Why do I lie awake all night and dream all day long?" -- I love the way her voice falls away on the long drawn-out 'lie'.
The upshot of this new love affair with Vera's music has been that I've listened obsessively to my favourite tracks as I've driven to and from work over the last few weeks and I've now learned a short 'set' of songs which I belt out as I wait in the nightly jam on the motorway (Oh lord, shades of Granny!). I've tried to perfect all of Vera's diction and the places where she 'swerves' the notes a little (oh yes, she does, you know!). My set consists of "Don't You Ever Cry",
"If I Didn't Care", "A Nightingale sang in Berkeley Square" and "When You Wish Upon A Star" in which I also have to sing the male part of Vera's duet with Jack Cooper. I'm not going to lie, now that I've got these four songs off pat I've started to indulge in a highly seductive fantasy where my novel is being launched at some ritzy venue and I come sashaying in in a long frock and perform the book's 'title song' into an old-fashioned microphone. Don't worry, it's only a fantasy -- I know my limitations. 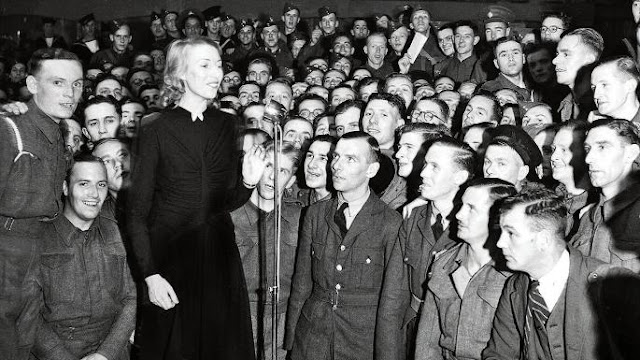 As I listened over and over again to all the songs on my CD, something occurred to me that also had a bearing on my novel: Vera doesn't exclusively sing lyrics from a woman's point of view. Sometimes there's a degree of ambiguity, where it could be a woman or a man expressing their feelings and sometimes she definitely sing's a man's part. Take "I'll Be With You In Apple Blossom Time", for instance: 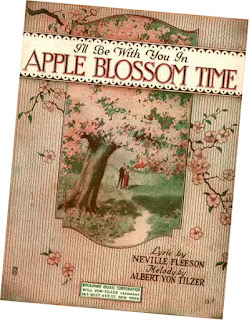 There can be no doubt that the 'voice' of the lyrics is a man when he says he'll change his betrothed's name to his.

And in "Don't You Ever Cry", the 'voice' of the song is clearly a soldier who has gone to war and who tells the girl he has left behind not to worry about him: 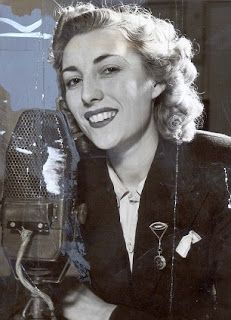 Vera Lynn is and was so profoundly identified with the War effort that she was a highly effective propaganda weapon. Her radio broadcasts held the battered nation together and were a familiar voice from home for British troops overseas. Her lyrics repeat over and over again the longing for the war to be over, looking forward to the time when 'love and laughter' will start up again. She kept us going in a very real sense, I believe.
I find it interesting that the role she plays in her songs' narratives could be relatively fluid and she could sing both to and as men and women. My gut feeling is that this may have been made more possible by the fact that she was a relatively plain, straightforward person who didn't go to great lengths to appear glamorous and ultra feminine. When Vera toured Burma to visit British troops in 1944, at no small risk to herself, the men were thrilled to see and meet her and treated her like a kind sister in whom they could confide their fears and hopes. She said they behaved towards her with great respect. 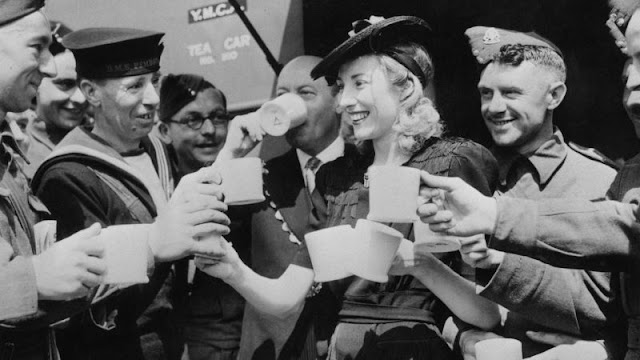 I've become more tuned in to fluidity between male and female roles since writing my novel. In it, the three main characters all find their gender identities under pressure for different reasons: in particular the two men's masculinity is undermined, one because of his sexual activity and the other because he can't conform to the rather rigid norms of masculinity expected by mid-twentieth-century British society for health reasons. Meanwhile Jean, the narrator, is forced to take on a role more usually played by men. It was very interesting to write.
I'm currently asking writers if they'll read my manuscript so that I can build up some endorsements with which to 'wow' prospective literary agents. I'm in this for the long haul so am taking all the time it takes to contact authors and beg them to read my manuscript. Understandably, a good few have declined, but I'm slowly amassing some precious positive comments. I want to find an agent who absolutely loves my novel and who will represent it with passion and I see this as part of the process.