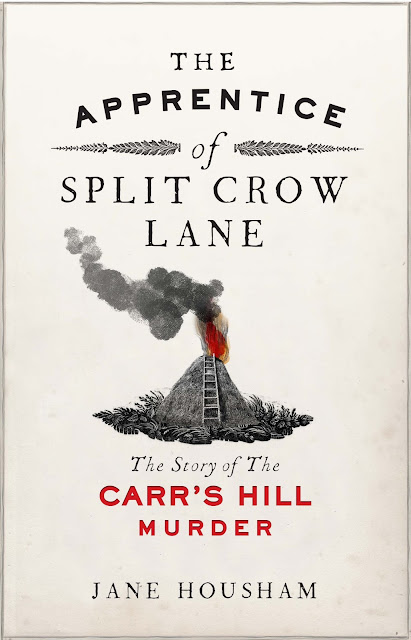 My book, The Apprentice of Split Crow Lane, is published today, which is very exciting for me. It's a historical true crime book, which would be enjoyed by fans of Kate Summerscale's The Suspicions of Mr Whicher or The Wicked Boy, but also by anyone who enjoyed the Serial podcast.
I came across the story of the murder of a little girl while I was researching my own family history. The place where the murder was committed shared a family name and I had already traced my ancestors back to Gateshead and Heworth, both very close to Carr's Hill. There has long been a village on Gateshead Fell, just south of Gateshead, called Carr Hill but in the nineteenth century it became known as Carr's Hill because of its association with a family named Carr. This family are at the heart of the book. 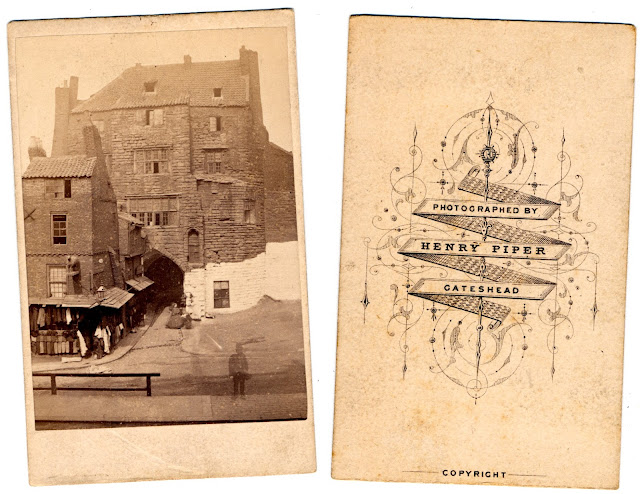 I found this old photo amongst the pictures I salvaged from my Mum's garden shed. As the photographer was based in Gateshead, I thought it might show part of Gateshead, but Russell Lee has very kindly left a comment, below, to tell me that in fact it's the Black Gate in Newcastle. Judging by the dress worn by the woman in the centre of the image, it must date from the second half of the nineteenth century, perhaps even the 1860s when my book is set. Here she is blown up bigger: 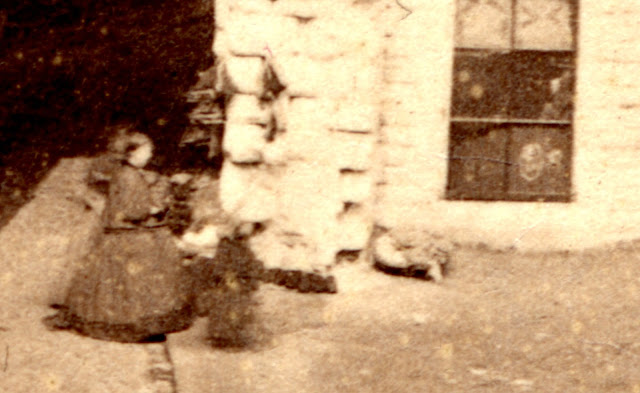 Her dress is certainly of a shape that was worn in the 1860s. But what really fascinates me in this photo is the ghostly figure in the foreground. Every time I look at him, I think he might be a policeman. Here's a blow-up of him: 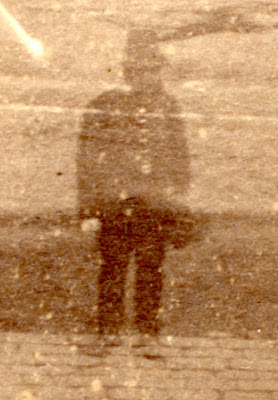 I think he must have moved while the photograph was being exposed, hence his rather insubstantial appearance, but could that be an early police tunic and helmet he's wearing? Here's a Victorian bobby for comparison:

It would be peculiarly apt if the figure were that of a policeman as I've become so immersed in various crimes committed in and around Gateshead in the 1860s. From arson to sectarian violence, sexual assault to murder, it's all in my book. The real policeman who oversaw efforts to rein in the lawless elements in Gateshead was Chief Constable John Elliott, seen here in a photo which I've kindly been given permission to use by George Marshall of www.gatesheadpolice.org: 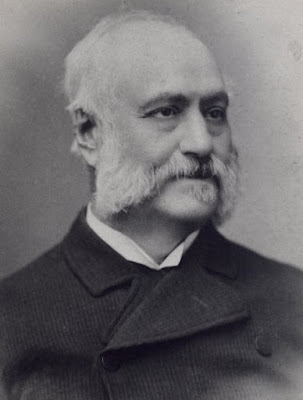 John Elliott was known as 'The Journeyman' because of his long, steady career. In my book, he's kept very busy as he was not only in charge of police investigations but also of the fire service. As there were many acts of arson around Gateshead in the Autumn of 1865, he was often to be found at the head of the fire engine as it was pulled up the steep slopes of Gateshead Fell.
I don't want to give too much away about the crime that's at the heart of my book, but I have done some serious detective work and have come up with some insights that add to what was known about the case originally. I found it completely compelling and am hoping that people who read it will be similarly drawn in.

The Apprentice of Split Crow Lane from Quercus imprint, riverrun

Congratulations on the publication of your book Jane

From the audio clip and knowing your amazing detective skills, this sounds a cracker of a book to curl up with and it's on my Christmas list from today! Well done, Jane.

Just finished reading your book Jane, amazing research into not just the crime but the social mores of the time, you cover such a lot with clarity and insight

I just finished reading your book today, after a recommendation from a member of a County Durham genealogy FB group. I found it excellent -- a real invocation of 1860s Gateshead, and a thoughtful investigation of attitudes to mental illness and crime.
I had a number of ancestors there (in Pipewellgate) but luckily none of them made an appearance.
BTW that picture with the ghostly policeman is the Black Gate, Newcastle.
https://www.oldnewcastle.org.uk/black-gate
AntheaFG

I am reading your book now. I am descended from Cuthbert's brother, Richard and I would like to know how to get in touch with you as I have some family pictures you might be interested in seeing. None of them are of Cuthbert, but of his siblings. Ironically, I have a doctorate in clinical psychology and work in the forensic psychology department of a state psychiatric hospital, so the details of this book are very interesting to me.

I posted my comment before finishing it. Richard Carr is my great grandfather. He is the one who did not go to Canada with his father and siblings, but to Chicago. There are descendants of this Carr family across the U.S., in Canada and in New Zealand.
Alice Greaves

Hi, Alice
I'm so sorry, I only just saw your comment/s and I can't email you in reply to them because you don't have a Blogger account. It's really great to hear from you -- it must be strange to read a book about a family relative. And how interesting that you work in forensic psychology yourself. I don't terribly want to put my email address on here, but you can easily find it online (which I realise makes it silly of me not to just give it to you -- apologies). If you look on my art website, www.janehousham.co.uk, there's a 'Contact Me' page with contact details. Please do get in touch. I would be so interested to see your family photos. Thanks and look forward to hearing from you,
Jane

I am a descendant of John Rodham Carr LL.D.; younger brother to Cuthbert Rodham Carr Sr in your book. I have, via my own family history research, accumulated quite a bit of information regarding the history of the Rodham Carr family, as well as information on the respective Rodham and Carr families also. Which I must say makes for a very fascinating read. I was wondering if you'd be interested in looking at any of it at all? If so, I should be more than happy to send it on to you.

I see from the comments above that another family member has been in touch with you. It would be lovely if we could all get in touch.

I wish to thank you for your book and especially regarding the diligent research which you have done.

Sorry. I forgot to say that John Rodham Carr LL.D. was a practising barrister-at-law and honourable member of Gray's Inn, at the time that his nephew Cuthbert committed the crime. Since reading your book I have often wondered how he must have felt about it all; as indeed did the whole family really.

In the 1851 census return, John Rodham Carr was actually living at the Carr's Villa residence in Gateshead (the family originally were born and brought up in Wolsingham, County Durham) and he does give this address elsewhere too, even though his main address was in Wolsingham years after that. Interestingly also, their mother Ann was residing at Carr's Villa in the 1851 census, by then a widow and annuitant.

Hi Julie
Thanks so much for both of your comments. I'm delighted to hear from you, and naturally I'm very interested in your research into the Rodham and Carr families. Unfortunately, because you don't have a Blogger account, I can't email you directly, but you could email me, if you don't mind tracking down my email address: just click on the link to my website at the top right of this blog (ice-skater image) and then click on 'contact me' on the left hand side of the website. Thanks and I hope we can then email each other.
Jane

I was raised around the area known as Carr Hill in Gateshead & went to Carr Hill School. The photograph, which you describe as being somewhere in Gateshead, does in fact appear to be the Black Gate, which was the entrance to the medieval castle of Newcastle

Thanks so much, Russell. I'm so pleased to have been able to correct that. On Google Street View, you can see the Black Gate and it's hardly changed since that photo was taken. Have you by any chance read the book? It might be of interest as you're so local to the area.
Jane