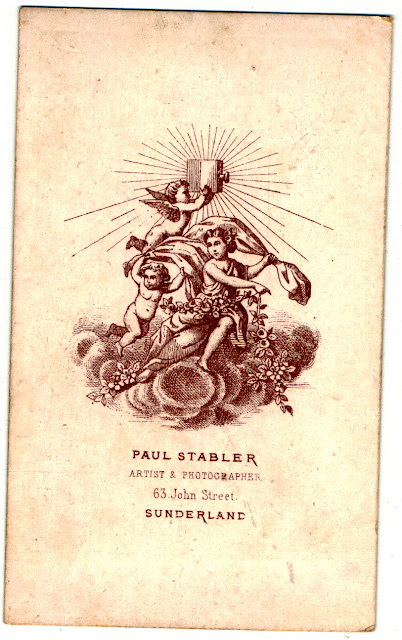 Because there are often crucial clues to the subject's identity written on the backs of photographs, I've got into the habit of checking the backs of old photos when I'm sifting through boxes of them in junk shops. In fact I've had some funny looks when people have spotted me going through the photos without even looking at the fronts -- if I'm searching for photos to 'investigate', it doesn't really matter how wonderful the image itself is if there's no name or other information written on the back. I always start off looking at both the front and back, but if time's running out, I just look at the backs, much to people's mystification.
But even while doing that, I haven't always been alive to the beauty of some of the backs in their own right. 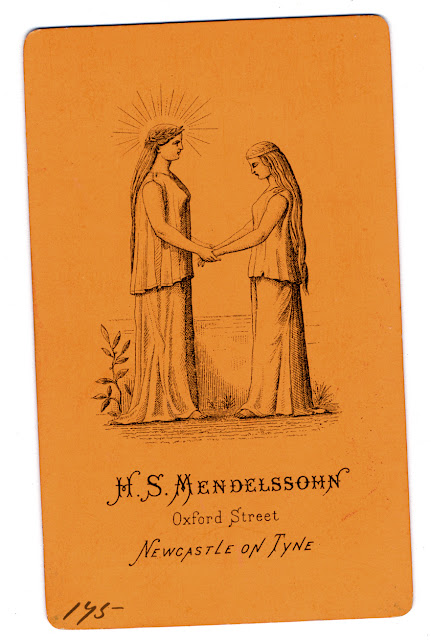 Recently, though, I've been scrutinizing the backs of the cartes de visite that I already own, looking for where the photographers that took them were based. And in doing so I've woken up to the little works of art that many nineteenth century photographers made of the backs of images produced by their studios. I particularly love the cherub with a camera in the first image above. And the calm visitation from an angel in the second (is it Mary and Elizabeth from the Bible?). The care that photographers took to decorate the backs of their photos suggests that they were well aware of the marketing opportunity the backs offered and that, whatever they were obliged to reproduce on the fronts, they could provide a consistently attractive image on the backs.
Among the Victorian and Edwardian photographs I inherited from my Mum, there are quite a few from the famous studio of Frank Meadow Sutcliffe in Whitby. Clearly, the studio would periodically update their back design, to reflect the latest prizes they had won or prestigious clients served. Just from the photos I own, it seems Whitby, as an important nineteenth century tourist destination (and also the centre of the jet industry, Whitby jet being highly valued for mourning jewelry and black beading, big at the time), had many photographic studios vying for custom. I have cartes from three apart from Sutcliffe's. 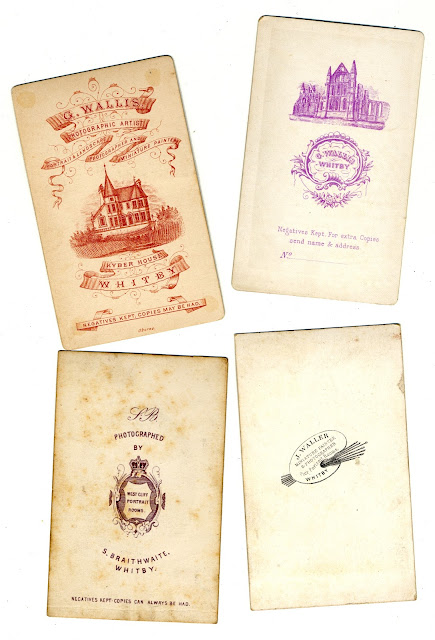 Of these backs, I adore the one belonging to the studio of George Wallis, with its illustration of Khyber House. At first I thought this might be an imagined house, so perfectly does it represent my fantasy of a perfect Gothic house. Imagine my delight, then, when I discovered that Khyber House is not only real but still standing. 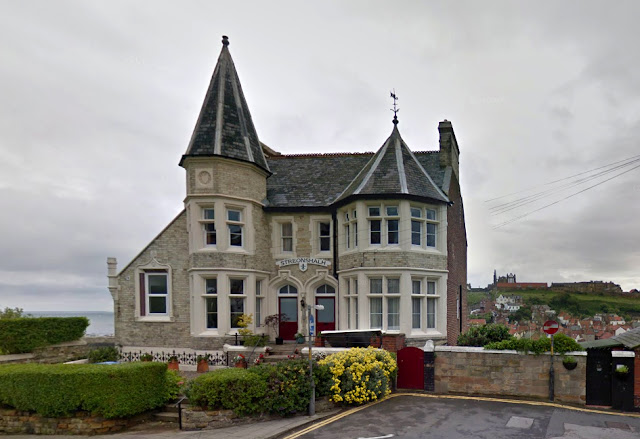 It's now called Streonshalh (sounds Scottish?) but it still stands opposite Whitby Abbey (which you can just see in the background) on the winding road down to the quayside that's still called the Khyber Pass. This must have been where George Wallis's studio was.
After this, I got the bit between my teeth and went hunting for another photographer's studio. I have this card, for Robert Gibbs' studio in Middlesbrough. 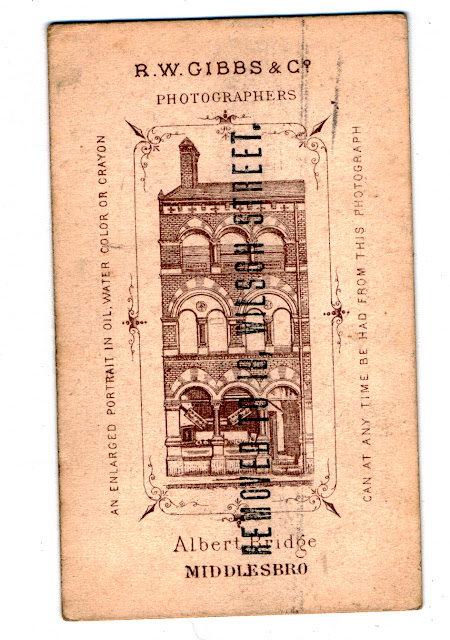 Again, I absolutely love the illustration of the premises, even though the stamp over the top told me they'd moved from there. To Google StreetView! 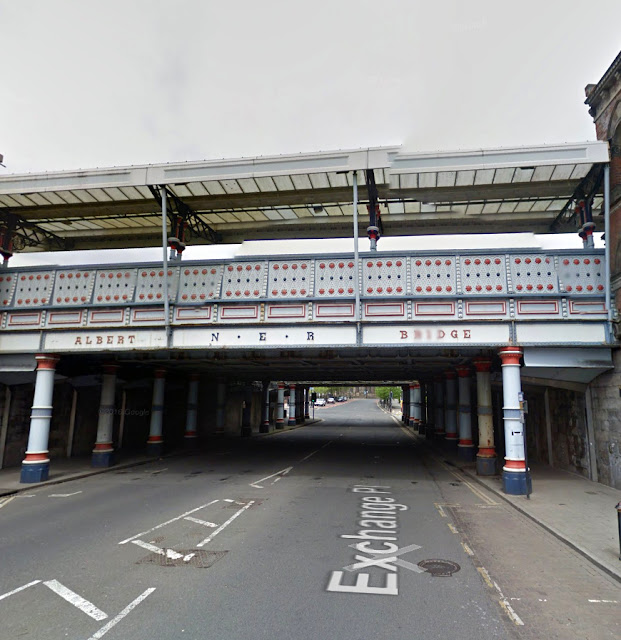 First I sought out the Albert Bridge, which is a railway bridge close to Middlesbrough station, in fact I think the platforms must extend over it, judging by the canopies. 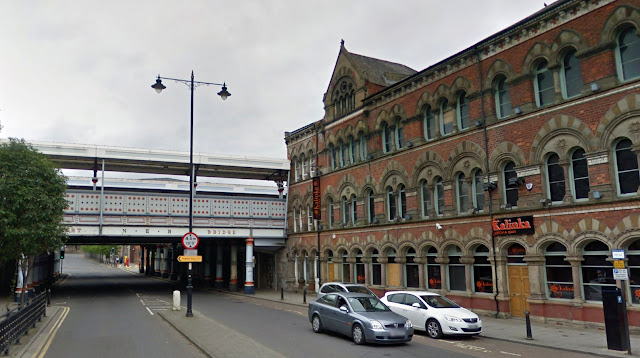 Then I pulled back from the bridge to see what was nearby on both sides. On the southern side there's this lovely Victorian building, now a vodka bar. And tucked into the corner of the bridge... 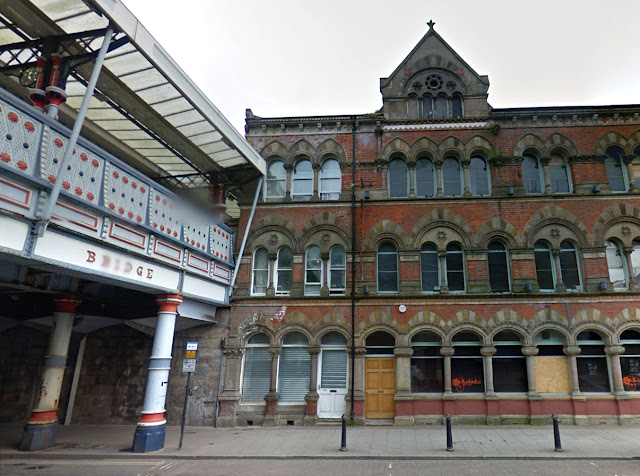 Yes! It's Robert Gibbs' old studio, a bit battered and rather impinged upon by the station roof canopy. But still there. Which is more than can be said for the Wilson Street studio -- that whole area seems to have been opened up and redeveloped, so I didn't find the second Gibbs studio.
Looking for information about Gibbs, I found some interesting bits in the Middlesbrough Evening Gazette. He was born in Great Yarmouth in 1843 and must have moved up to Middlesbrough when he was quite a young man. His wife, Alice, was from Skelton, quite near Middlesbrough. By 1873 he was apparently a Freemason. He lived until 1921 but photography didn't remain his profession throughout his working life. In the 1901 census he's a 'theatrical agent' and in 1911 (the last available census return), he's a 'house agent'. His son, John, who started out as assistant to his father in the photography studio, was working as a gardener by 1901, so photography doesn't seem to have been all that good an option, perhaps because of the increasing numbers of people who owned their own cameras (or was that a bit later?).

I bought a lovely book about cartes de visite -- both fronts and backs -- this week, from a small, independent press in Lancaster, Fast Foot Press. It even comes with a reproduction cdv in a glassine envelope glued inside the back flap of the cover ('glassine' is one of my absolute favourite words -- any excuse to use it). 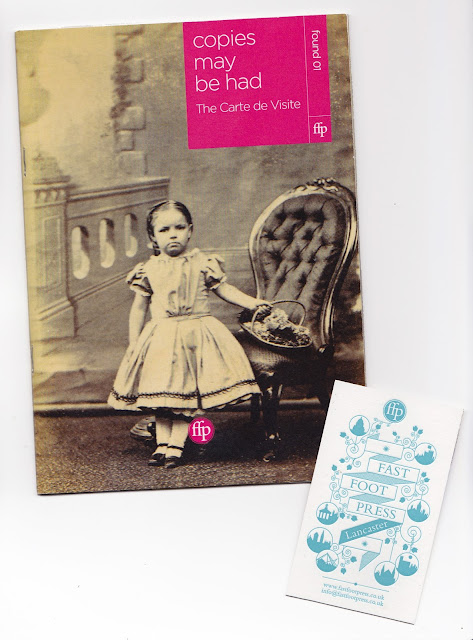 I love where your fancies take you! You never do anything by half once you get the itch to be curious. I know a man locally who has spent a lot of time looking for photographs from the photgrpaher who was based in Narberth,our local town, plus those who plied their trade in the rest of Pembrokeshire. Your post reminds me of a fascinating afternoon I spent with him talking about the backs of cabinet cards etc. I might follow your press link and read more!