By the end of the nineteenth century, Switzerland was established as the world's leading country for finishing schools. These upmarket establishments were for young women: by spending a few months or a year at a finishing school after the end of their formal educuation, it was believed that young ladies could polish their manners and learn all the social graces they would need to enter society and, most importantly, find a suitable husband. Deportment and etiquette were taught and the pupils would be encouraged to speak French, to paint and draw their beautiful surroundings and to make friendships.
In the 1890s a pensionnat, or boarding school, was run by a Dr Rapin in the Villa Orama at 27 Avenue de la Gare, Lausanne as a finishing school for young ladies. The large house had been built in the second half of the eighteenth century and, as can be seen in the postcard above, by the turn of the century it would have become the Hotel Jura, but in 1891 it was still a school. 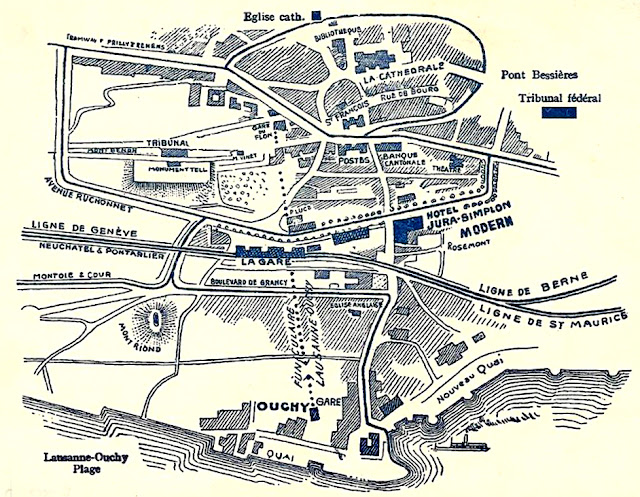 You can see where it was from this map, which dates from around 1911, after the original building had been knocked down and a new hotel, the Jura Simplon 'Modern', built. It was near the centre of Lausanne, close to the train station. That was presumably how most of the young ladies arrived, having travelled across Europe by train. In March 1891 they included Miss Jeannie Wylie, aged 18 (I believe). 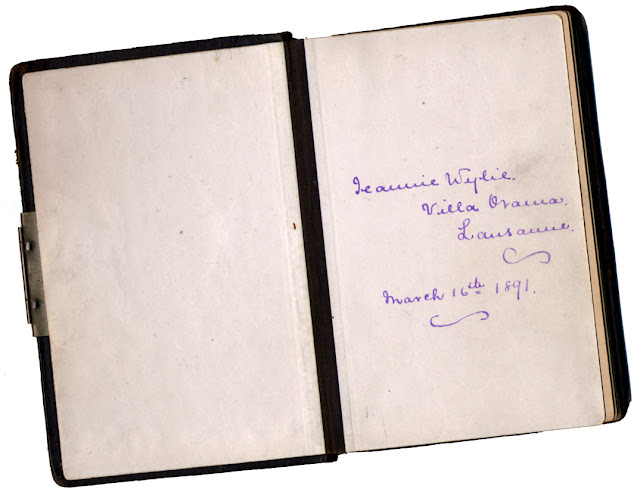 One of the first things Jeannie did on arriving was to buy a rather smart leatherbound notebook from Papeterie Mack, in rue de Bourg, just to the north of the school, near the cathedral. This was to be her autograph book in which all her new friends would write poems and messages and paint little vignettes for her to remember them by. 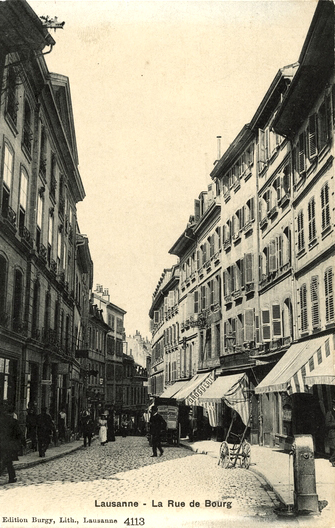 Jeannie was Scottish, so quite a few of the entries in her book have a Scots flavour. I particularly like this specially composed verse, which ladles on the Burns idiom:

I like the guid auld Doric twang
Tae talk, or sing, or rhyme,
An' be it a sermon or a sang
Or e'en a Bairnies hymn

And as for names o' bonnie lassies
The Minnies, Idas, Ethels, a'
Parents were sure the biggest asses,
Sic' fancy names their bains tae ca'.

Another poem, which I won't burden you with, spells out 'Jeannie Wylie' with the initial letters of each line. That one's signed 'Ton amie de la chic table' ('Your friend from the smart table') and the date is given as 'Pitt's birthday' (May 28th -- Pitt the Younger!). 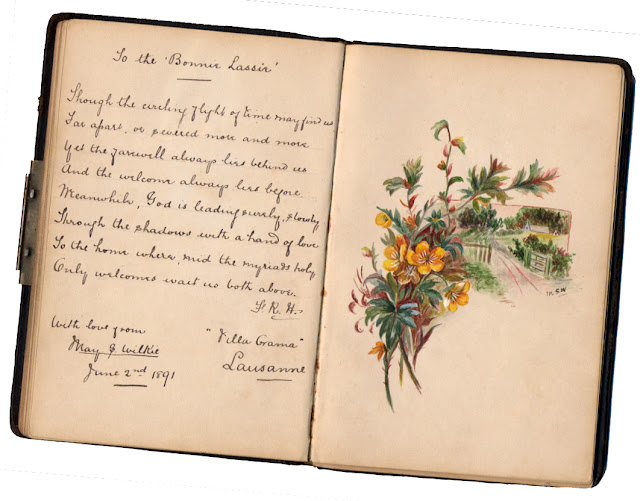 Some of the hand-drawn illustrations are lovely, like the one above. Others -- below -- not quite so accomplished.

This view of the Chateau de Chillon was extremely popular. Courbet had painted it in 1875: 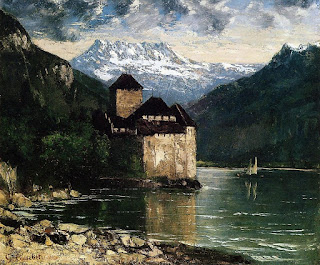 Did our young artist draw the actual castle or did they nip out and buy a postcard to copy?: 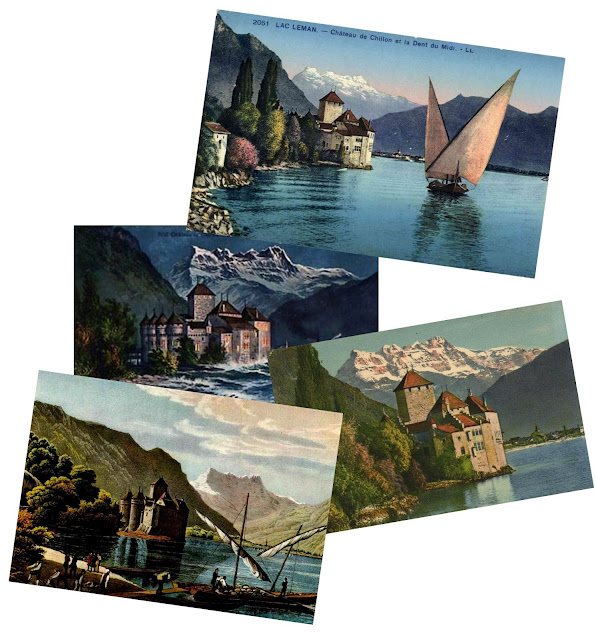 After a couple of months in Lausanne, Jeannie -- probably along with the rest of her class -- decamped into the countryside to the north to what was perhaps a sister school, housed in the Chateau de Marnand. 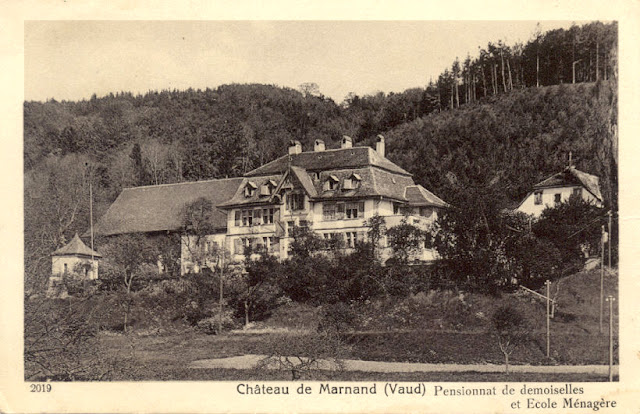 I like this next old postcard of the school because of the message written on the front: 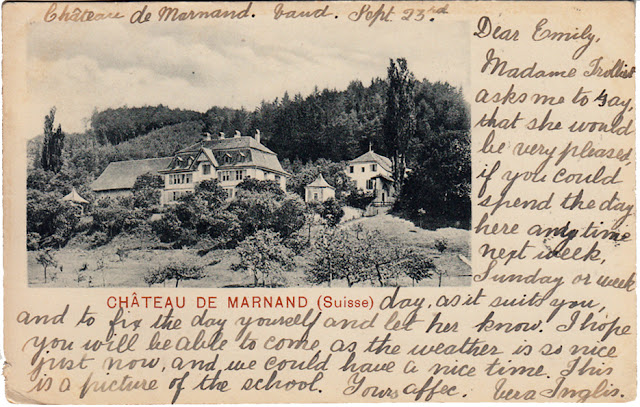 An ecole menagere is a very practical version of a finishing school, specialising in 'le menage', that's to say running a household, so it would include cooking, housekeeping, perhaps even how to take care of children. Tres pratique! 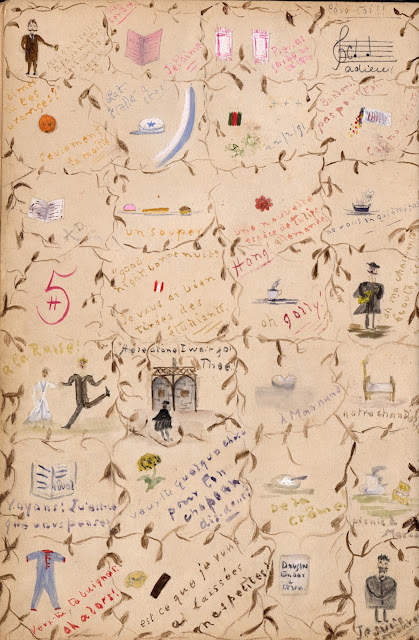 Overall, though, the book gives away what was perhaps the most engaging aspect of the girls' stay in Switzerland: the opportunities it afforded for flirtation. Although it's a little coded, there's a febrile interest in the opposite sex hidden on many pages. One of my favourite pages in the book is this strange amalgamation of memories and secrets, above. Here are some of the phrases: 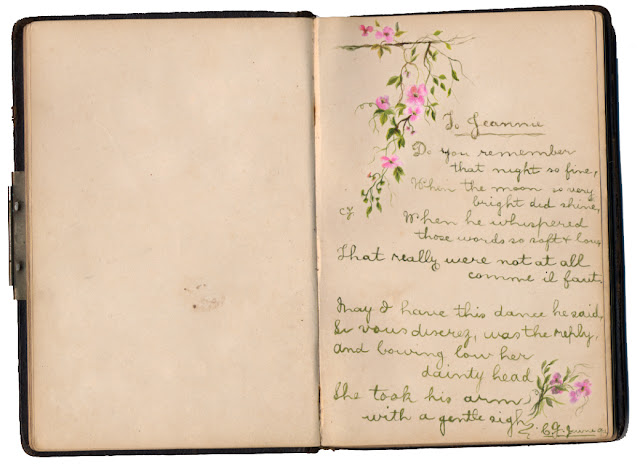 As well as the very slightly daring poem above, there's a much longer poem that reveals more. It concerns a young Russian gentleman -- and in the picture with all the tiny vignettes, above, you can see a couple dancing 'a la Russe', so perhaps that's him. The poem goes:

I have a charming tale to relate
of things that have happened of quite recent date,
a fair-haired young Russe has come to Lausanne,
and to catch his attention we do all we can.

The first time we saw him was at a soiree,
(Doctor Trolliet us had invited to tea)
And he had a flower in his coat, oh alors!
We saw it and gasped as we entered the door

But Madame had said, "Soyez comme il faut,
Je vous pris, cheres enfants, ne regardez pas les beaux" ["Behave correctly, please, dear children, do not look at gentlemen"],
So we sat down on chairs very straight
While the two madames had their tete-a-tete.

But when we began to play a ___ [can't read] game,
We very soon saw the dear Russe's aim.
For to two pretty girls he paid great attention
As if the others were not worth a mention.

Of course we were angry, that goes without saying,
He to two girls his attention was paying,
When of we others there was a great number
Who could do nothing but look and wonder

But that's not all, there's more to relate,
That occurred at an even more recent date.
The next day he came to see us at school
And then his behaviour was even more cool.

Madame a very grand supper was giving
To all her friends in Lausanne who were living.
The Russian turned up in the evening to dance
And of course we all thought we would
then have a chance.

But no, no, no, 'twas always the same,
Evidently he wished not the pain
of inventing new phrases for new sets of girls
Who looked at him askance behind their false curls

At last we saw that it was no good,
Although we all had done all that we could,
So with many groans when we saw it no use,
We others gave up "that horrid young Russe".

(That was a little altered at the second soiree, tu sais!)
Souvenir de ton bonne amie, tu sais qui" ["Souvenir from your good friend, you know who" -- should be "ta bonne amie" but they were just learning French. I think the Docteur Trolliet mentioned must be the husband of the Madame Trolliet mentioned on the school postcard above...]

I wouldn't normally find such poems that interesting, but I like this one as it records the actual experiences of Jeannie and her friends in what must have been a magical summer of freedom before they were expected to marry. 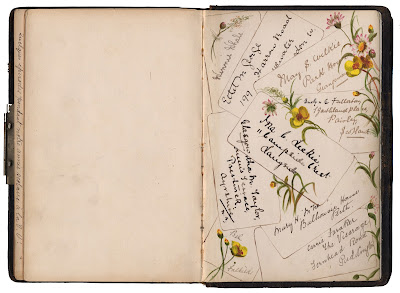 To finish off, here are some of the names from the book, in case they're of interest to anyone:

Intriguing piece of social history! I especially love the drawings - all the more charming for not being very 'accomplished'.

How lovely. I haven't come across many old photos and didn't realise the backs were so beautiful. Didn't realise I wasn't following you. Have rectified that now! xx