Milo and the Reverend Bott 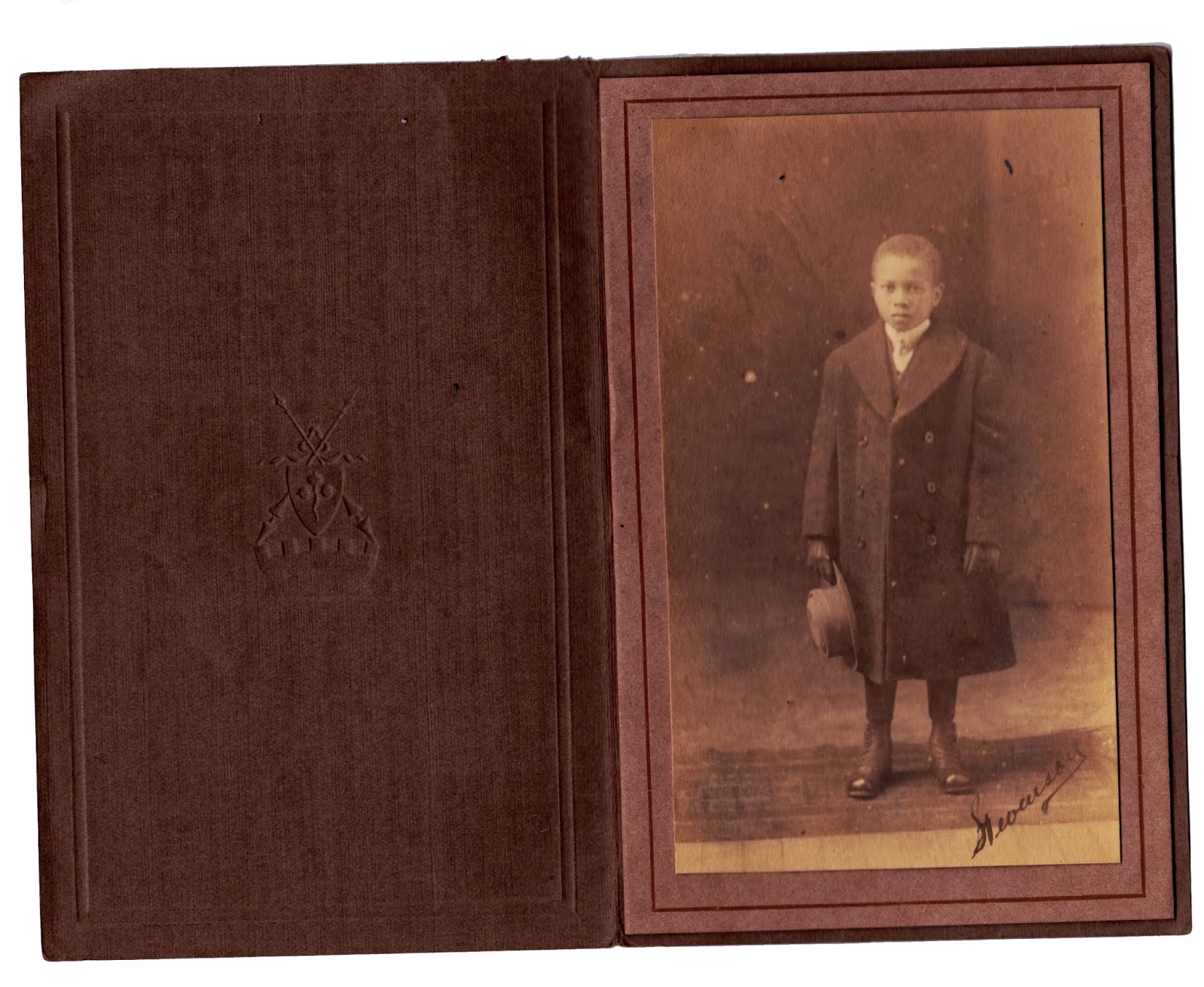 When I was going through the big, messy drawer full of the photos and postcards I rescued from my Mum's shed up in Richmond (Yorkshire) three years ago, I was surprised to find this beautiful photograph in amongst the snaps of 1920s Torquay and postcards of Piccadilly Circus. This young black boy is immaculately dressed in a smart overcoat, button boots, gloves, and a hat. 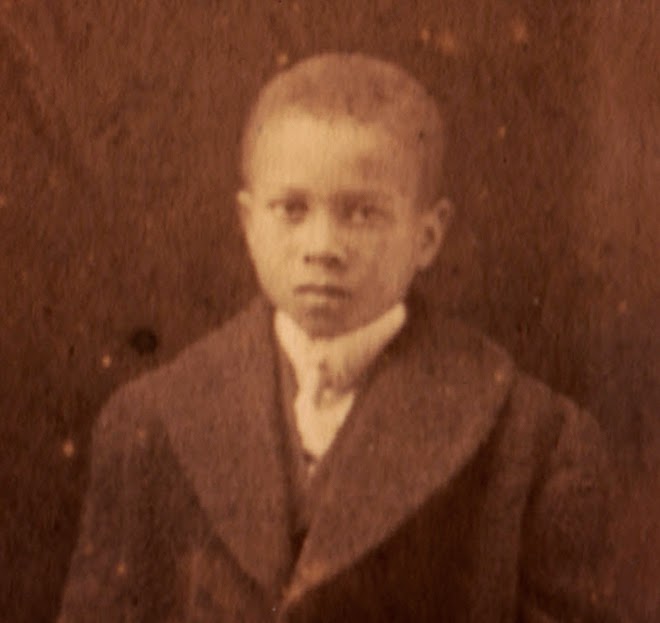 I was even more surprised when I looked on the back of the photo to find his name and that of his hometown: Milo Sprague Fields, Cairo, Illinois.
The photos and postcards were in disorder when I found them, damp and covered in smuts. They're even more jumbled up now and there are few clues as to where they all came from or how the images relate to each other. However, I've been through all the images again and can possibly attempt some kind of account to explain Milo's presence in my Mum's shed.
First of all, Milo. Milo was born in 1906 in Illinois. His father was William Fields, born in  Virginia in 1868; his mother was Florence Sprague Fields (nee Sprague), born in New York in 1875. These two were pioneers in health care for African Americans, which was virtually non-existent at the turn of the twentieth century. In Wanda Hendricks' book Gender, Race and Politics in the Midwest: Black Club Women in Illinois, I discovered that Florence was one of a number of African American women who acted to provide the beginnings of health care for black people in her state. Hendricks writes that African Americans were 'excluded from most hospitals or assigned to small, inadequate facilities. Most white doctors were reluctant to treat black patients for fear of white retaliation or because of their own prejudices. Consequently, the black community was responsible for constructing facilities and for training its own people.' For eleven years Florence Sprague Fields was the president of the Yates Women's Club, the oldest black women's organisation in Cairo, Illinois. It was founded in 1905. It was Florence's initiative to found the Yates Memorial Hospital, one of three hospitals in Cairo but the only one open to the area's 5,000 black citizens. It opened in 1916. Milo's father William Fields was a surgeon and he and the other black doctor in Cairo, Dr E. S. Dickerson, staffed the hospital. Florence was the superintendant.
Black women's clubs, such as the Yates Club, tirelessly raised money, built buildings such as schools, orphanages, homes for the elderly and for young women, and provided the social welfare that was neglected by the government. Later, they also campaigned for women's suffrage. Florence was a pioneer. I wish I had a photograph of her too.
Florence's son, Milo, grew up to become an employee of the national government in Washington, a messenger. He moved from Cairo to Chicago and then to Jamesville, Ohio and finally to Washington DC. Along the way he married a woman named Roma. In 1943, aged 37, he joined the United States army for two years as part of the war effort. Having married for a second time in 1955 (to Anna Roberts), he died in 1987 aged 81. He ended his days in Cape May, New Jersey.

So the question remains, how did Milo's photo come to be in my mum's shed? In amongst the mass of images, there's a surprisingly high number of clerics, gentlemen of the cloth, choirboys, priests, not to mention churches and religious imagery. Here's a selection: 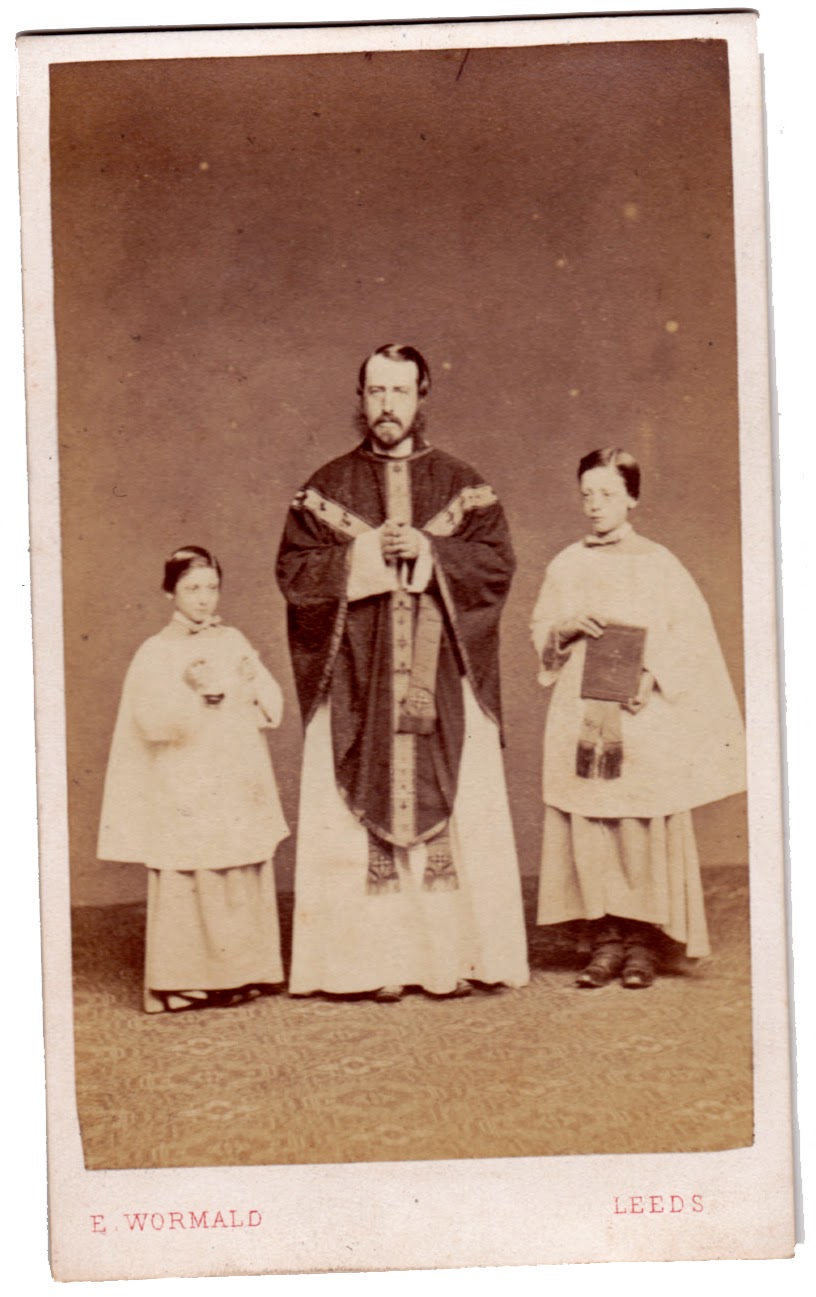 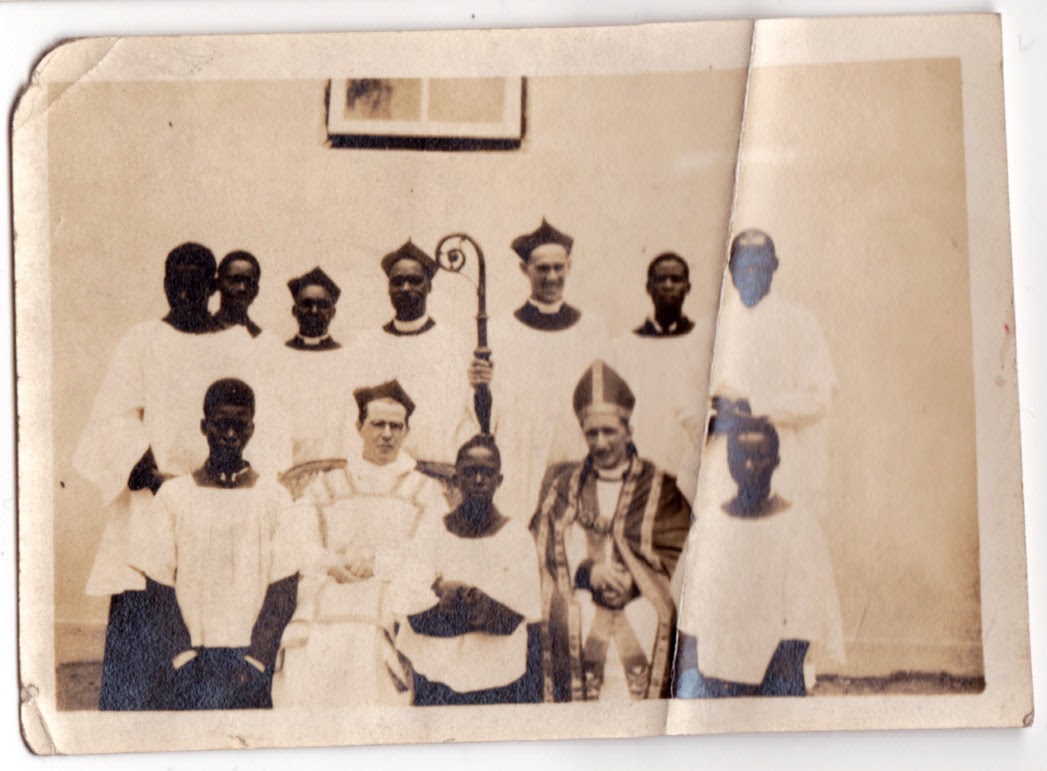 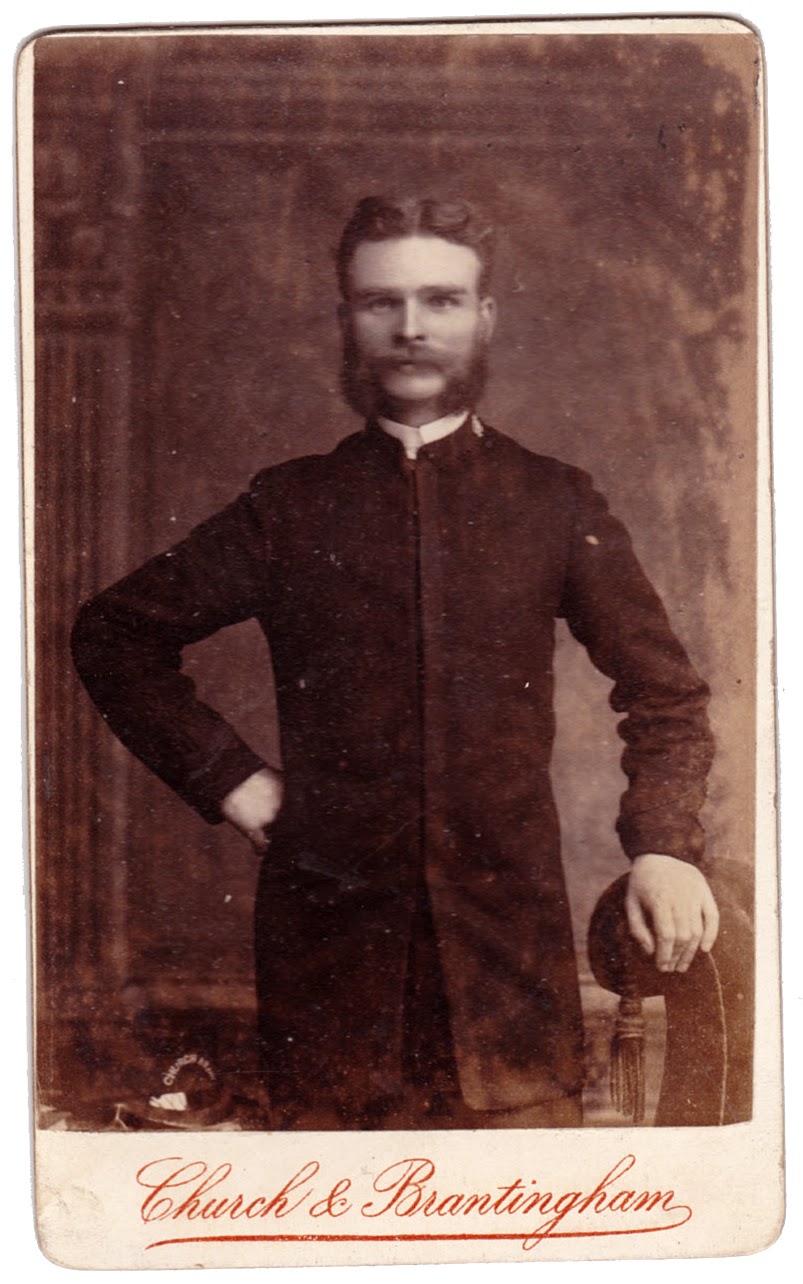 And no less than sixteen unused copies of a postcard of Raphael's Madonna and Child with Saint John the Baptist. 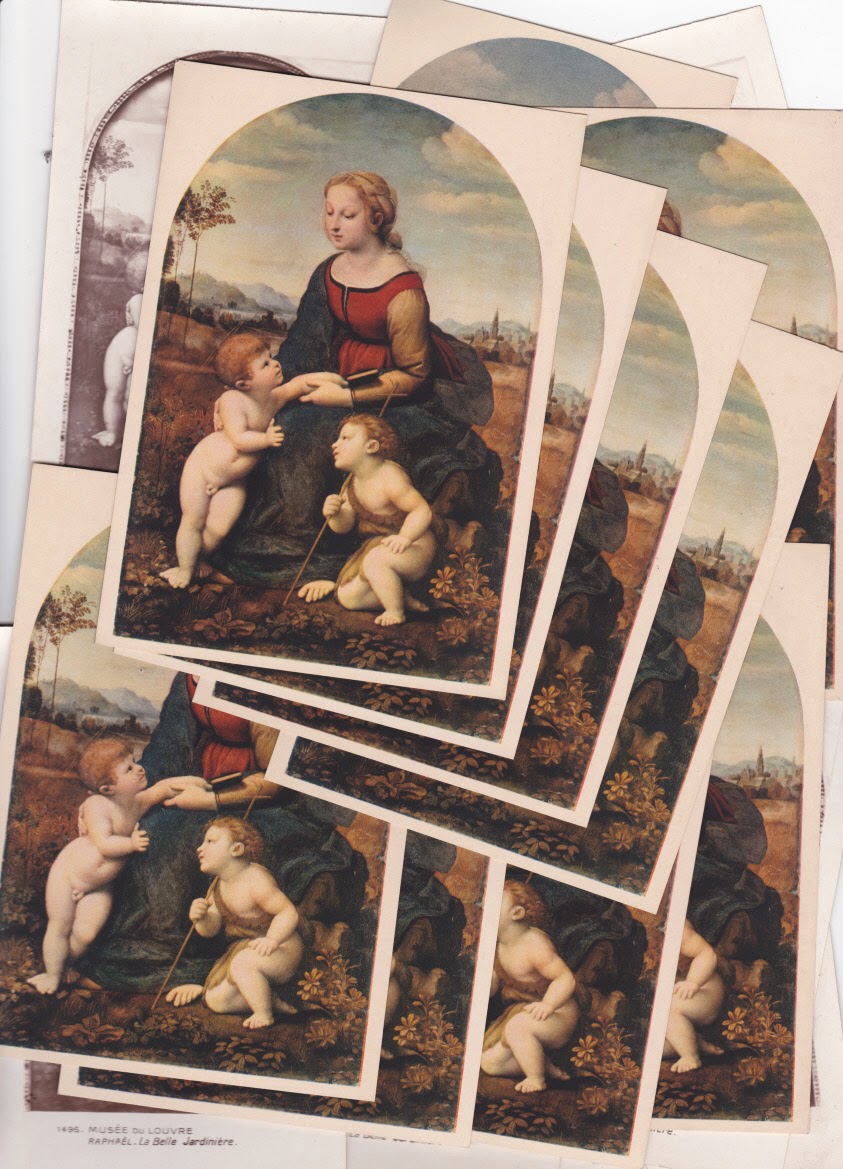 That painting must have meant a lot to someone. Perhaps there's a clue in the fact that the painting shows not only the Madonna and the infant Jesus but also John the Baptist. Some of the other postcards in the stack are addressed to Reverend A. J. Bott at St John the Baptist's Vicarage, Stockton-on-Tees (not too far from Richmond). 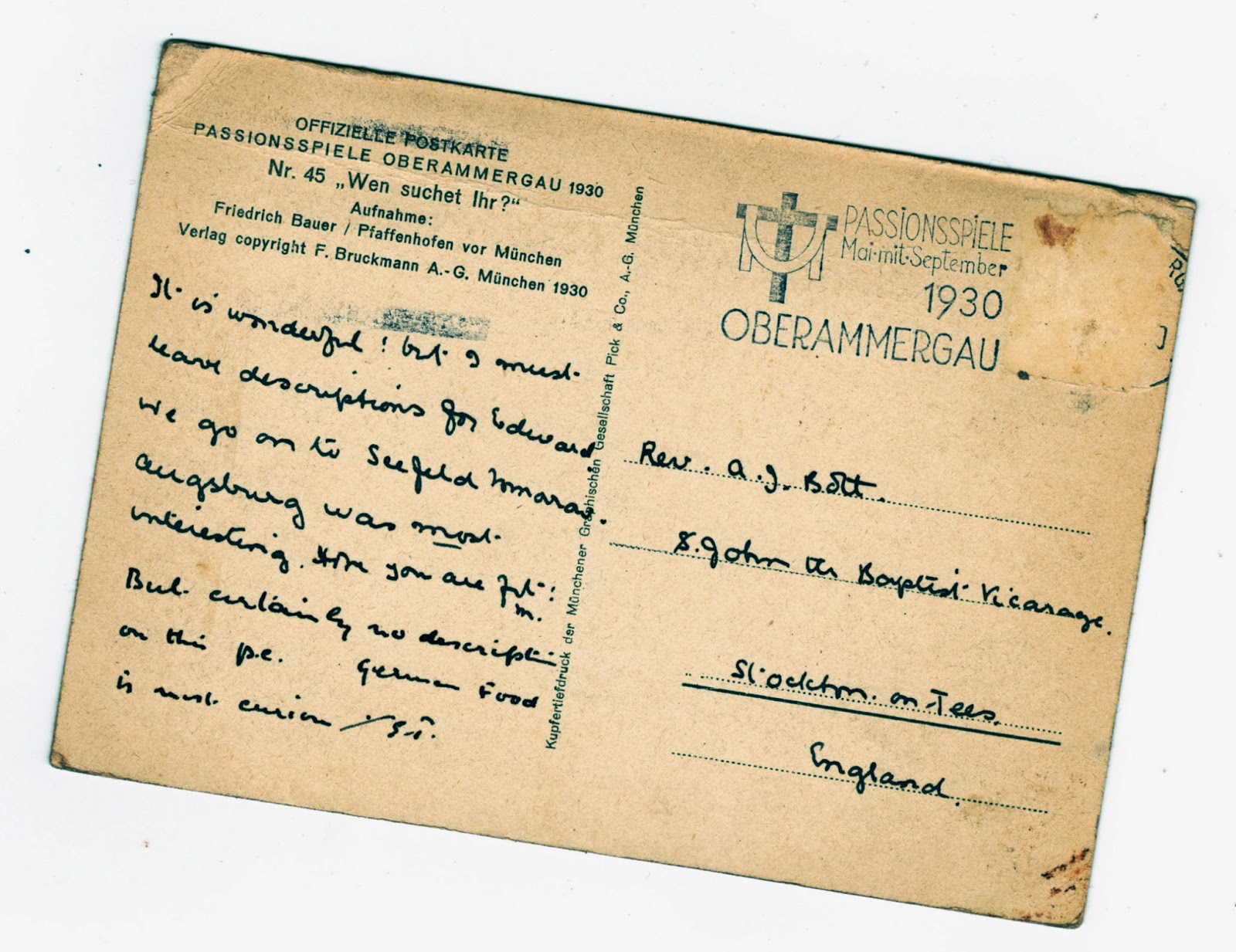 I think these are photos of Rev. Bott, as a young man, then progressively older and with his family around him: 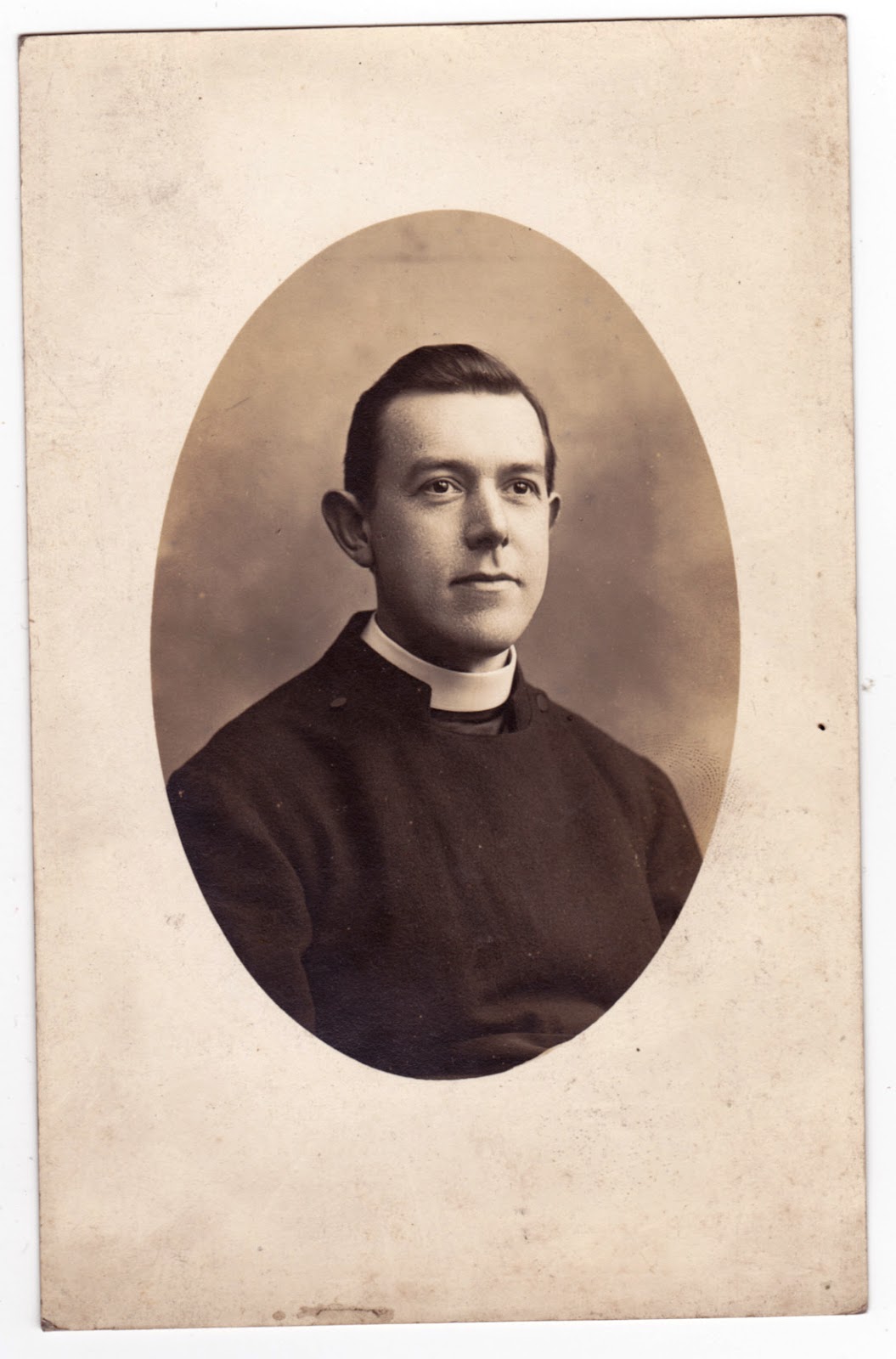 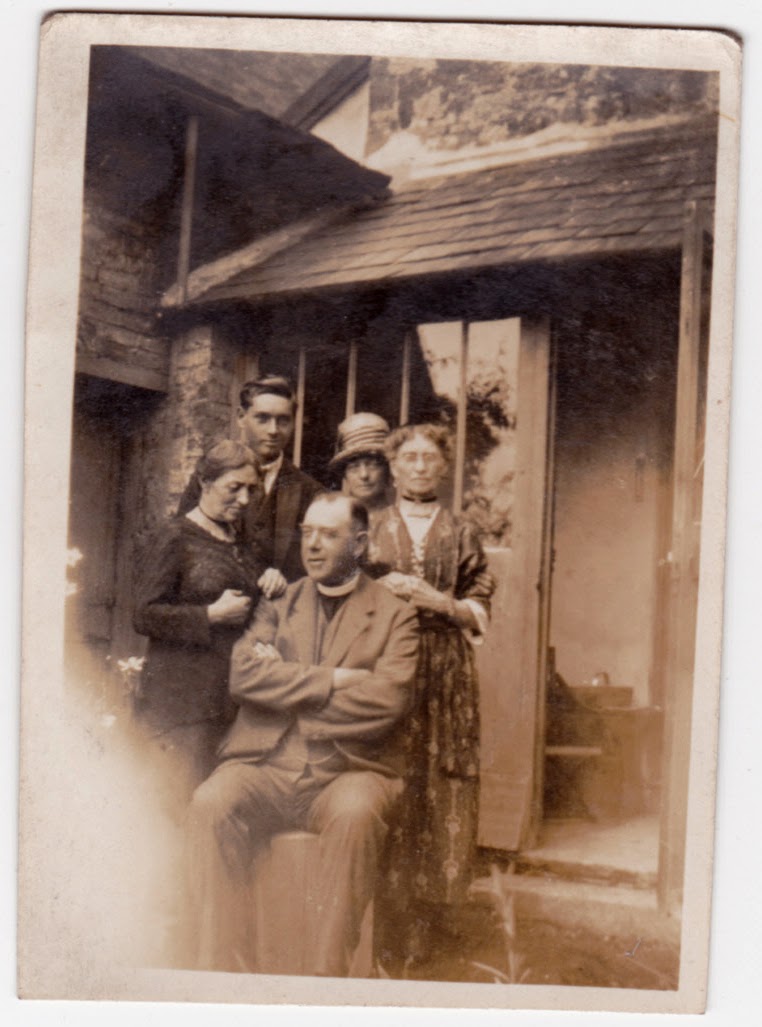 Arthur John Bott was born in Longbridge Deverill near Warminster, Wiltshire, in 1878. It seems his father, George, died in the same year that Arthur was born. By 1901 Arthur was sharing a house with his widowed mother Sarah up in Durham, while he studied at the university. In 1910 Arthur married Helen Margaret Jefferys, from the village of Hill Deverill, hard by Longbridge Deverill, so he probably knew her growing up.
The embarcation records of the SS Canada show Reverend and Mrs Bott crossing the Atlantic early in April 1911. They landed at Nova Scotia, then made their way into the heart of the United States. Travelling with them was an 18-year-old student named Benjamin Lewis. It's not clear whether Benjamin stayed with the Botts throughout the year they spent in the States, but a little side research on him suggests why he may have been travelling to America. He came from what I assume was a poor family -- his father was a coalminer working the Durham coalfield. But one of Benjamin's older brothers, Richard, unlike the other five children of the family (all born in Durham), was born in Rendville, Ohio, in 1887 (although the family returned to Durham when Richard was a small child). Rendville at the end of the 19th century was something of a boomtown, based on coalmining, so perhaps the family went out their to try their luck but didn't like it and returned to Durham. 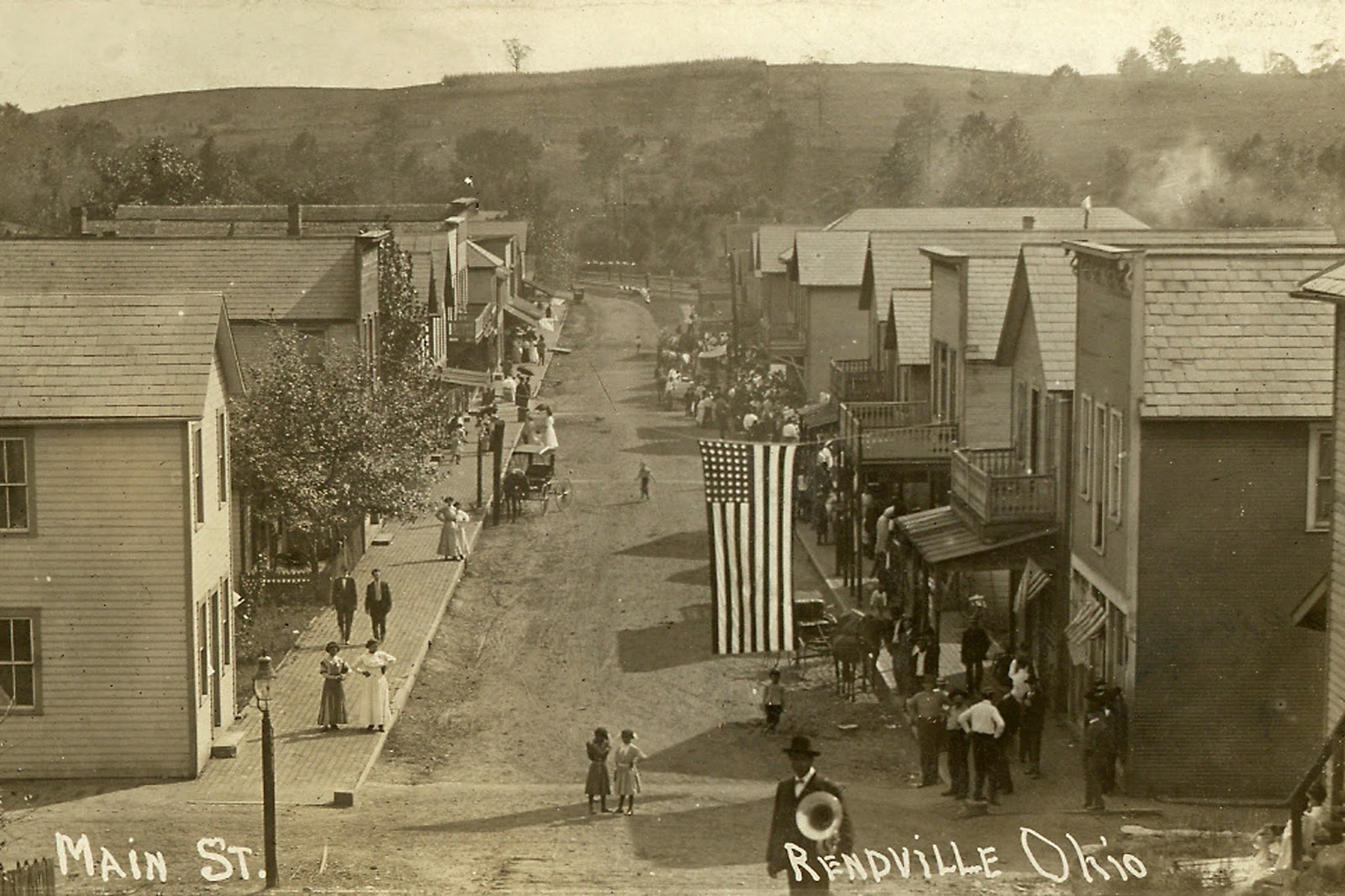 Rendville nowadays is barely a pinprick on the map, with an official population of 36, but it was a grander place at the turn of the twentieth century and at the forefront of racial integration. Perhaps Benjamin Lewis heard his parents talking about their American adventure before he was born and wanted to see it for himself. Perhaps he was a young priest going out to do missionary work. I can only guess.
Judging by the American postcards of churches I've unearthed from the stack, Rev. and Mrs Bott went on a grand tour of the Mid-West: 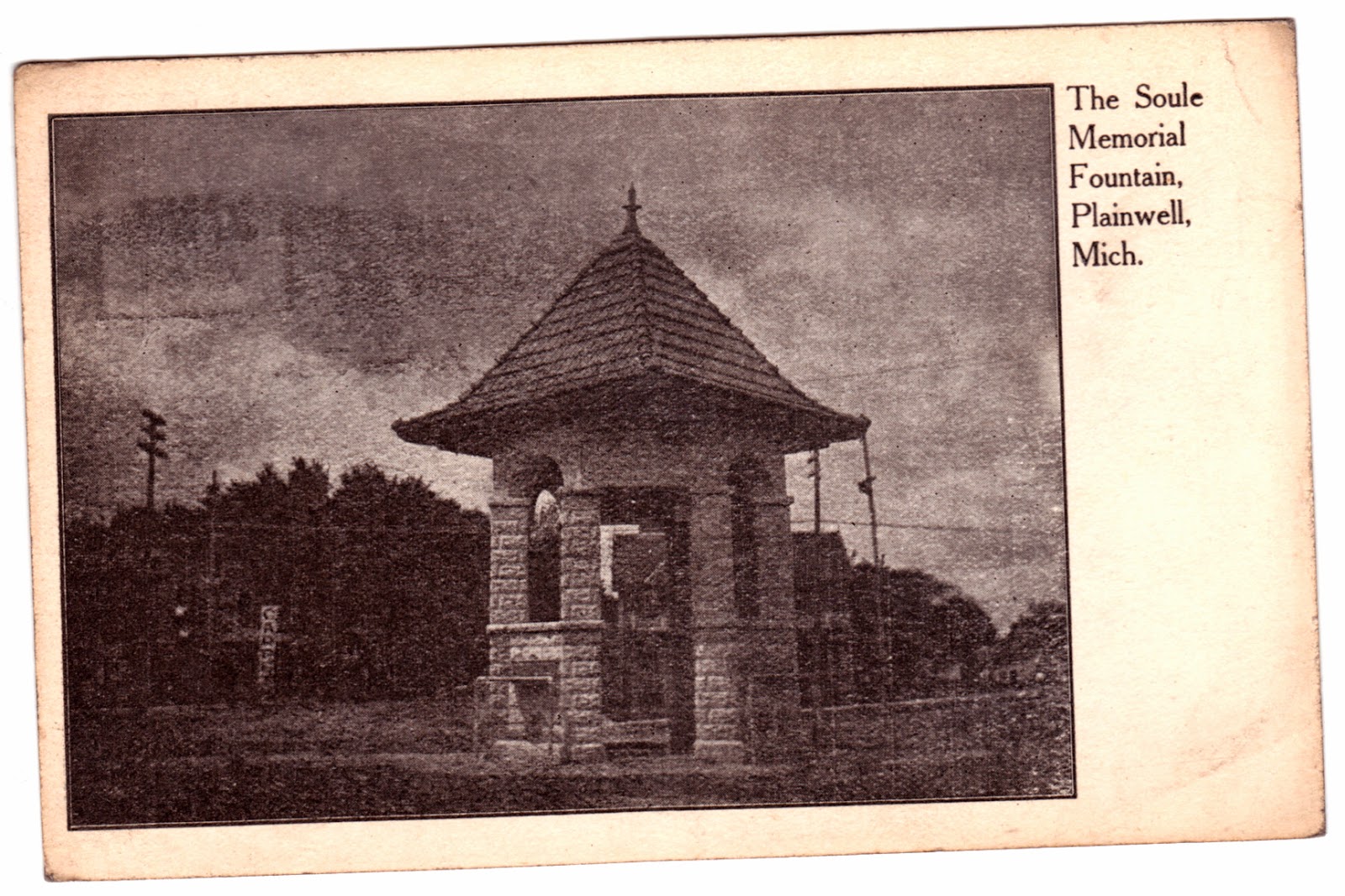 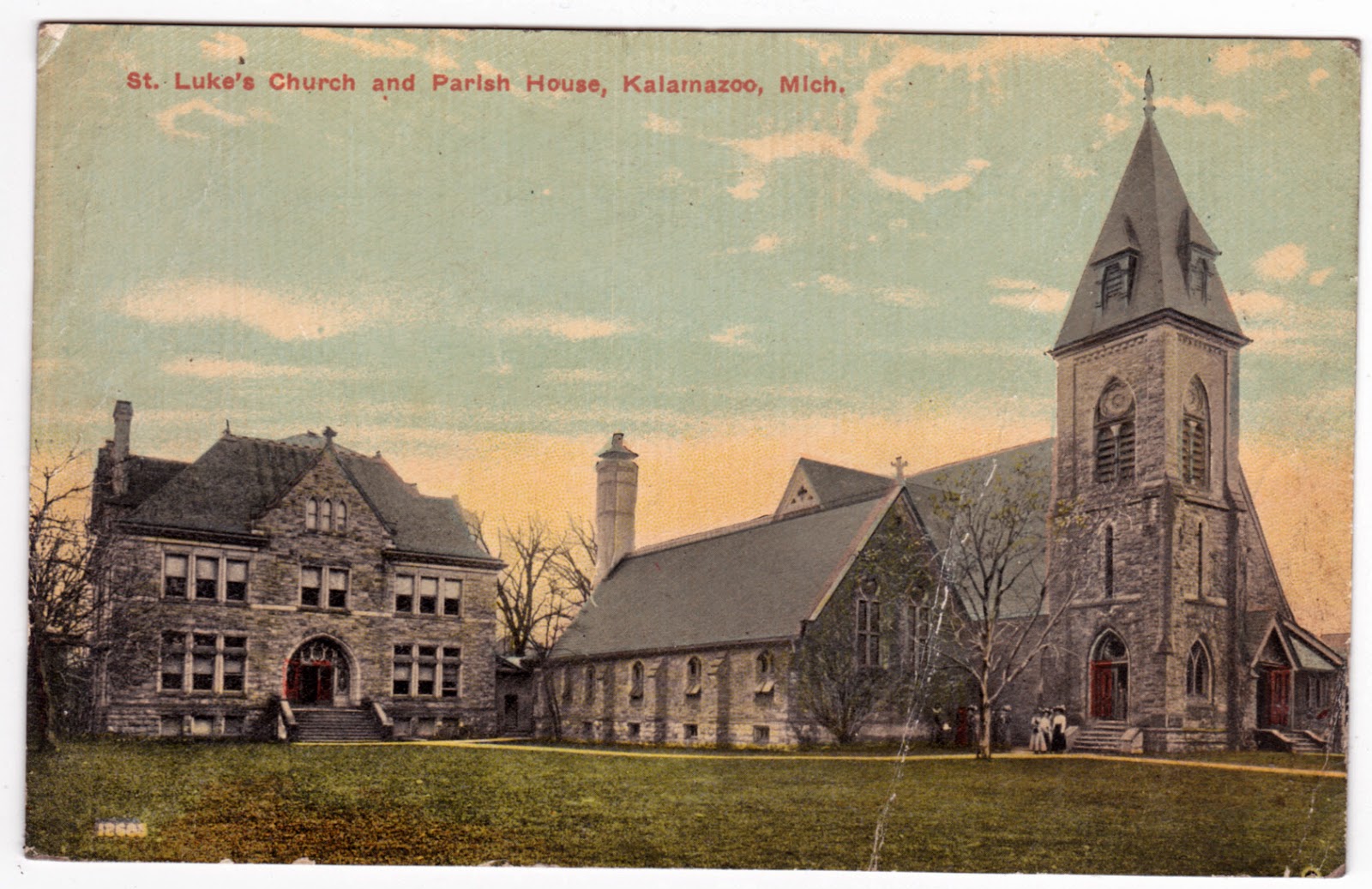 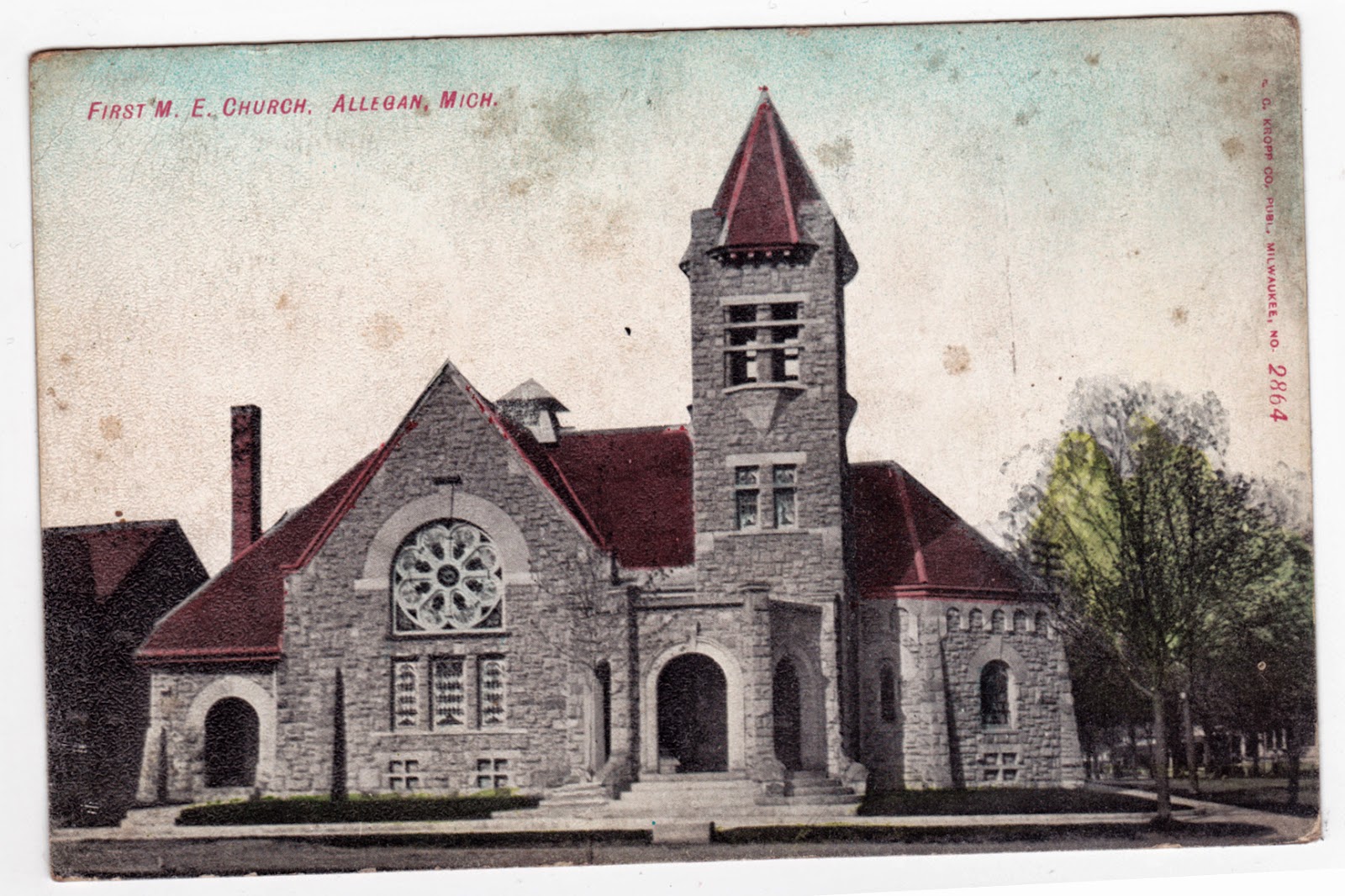 And they must also have visited Cairo, Illinois and, I'm imagining, met Dr and Mrs Fields and their little boy Milo, who would have been five at the time. If a friendship was struck, then it's easy to imagine that, a few years later, Florence Sprague Fields might have sent her good friends in England a fine photo of Milo in his Sunday best.
It seems the Botts also visited Washington DC and New York before they returned to England at the end of April 1912, over a year after they arrived in the States. 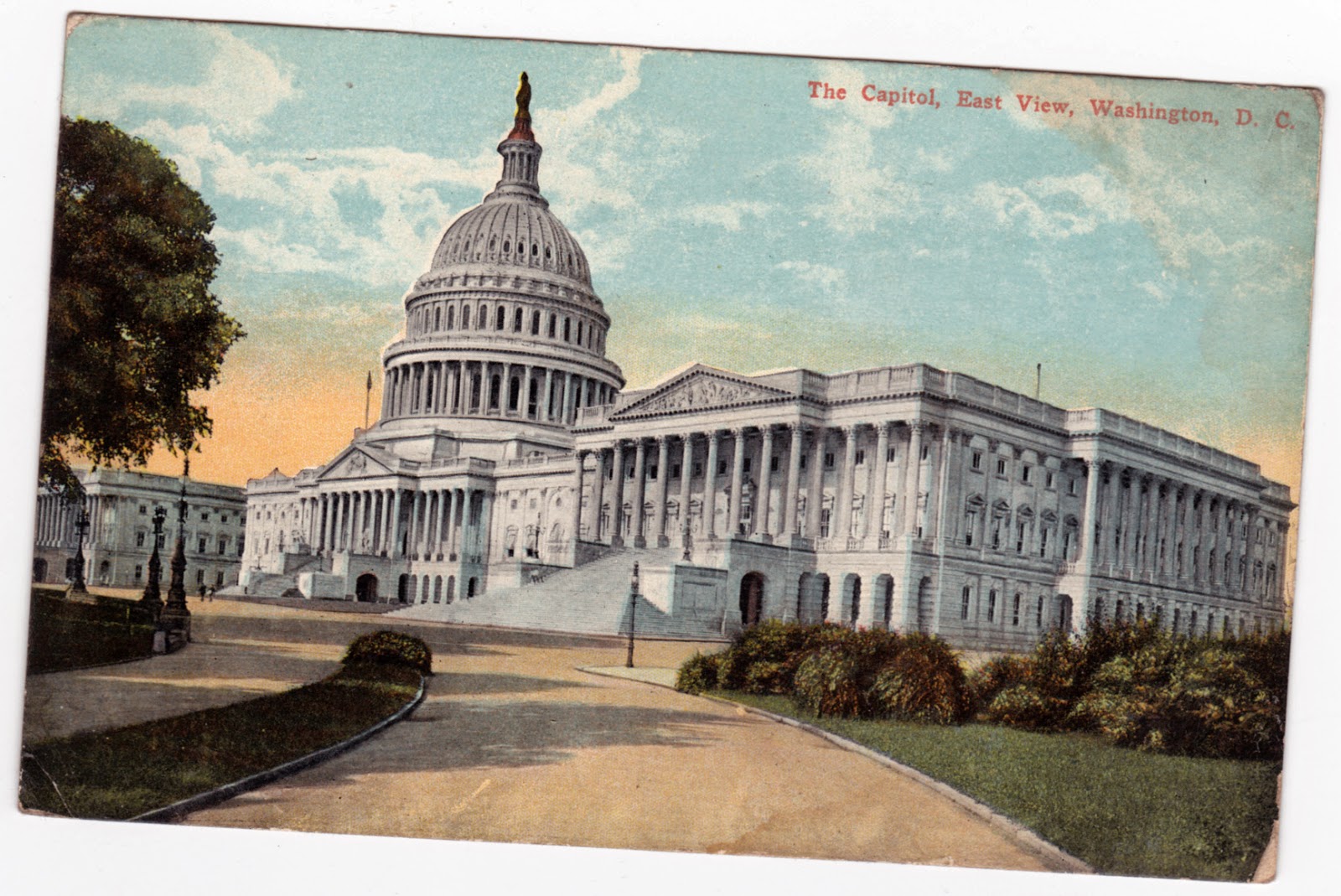 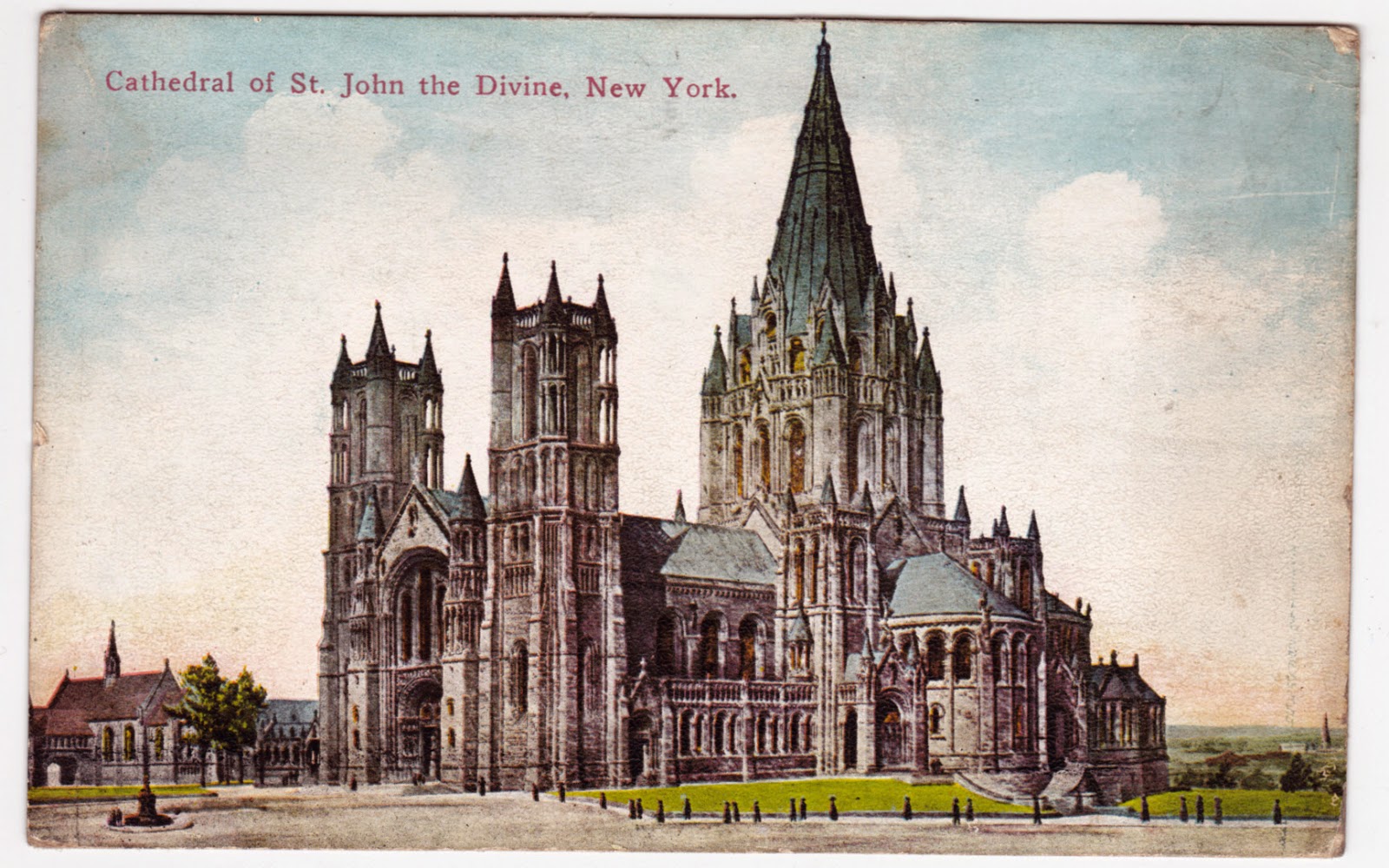 It must have been an experience they remembered for the rest of their lives.
Rev. Bott is still very fondly remembered as the Vicar of St John the Baptist's in Stockton. I found this image online which shows him leading a procession from the church on Alma St (long since demolished): 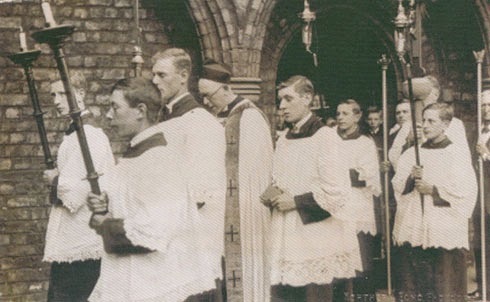 He died in 1939, but Mrs Bott soldiered on until 1981, her 97th year. She was known as the Angel of Stockton and was a dedicated visitor of the sick and old (always on her bicycle), even though she was often at least twenty years older than those she was visiting. I found this photo online: 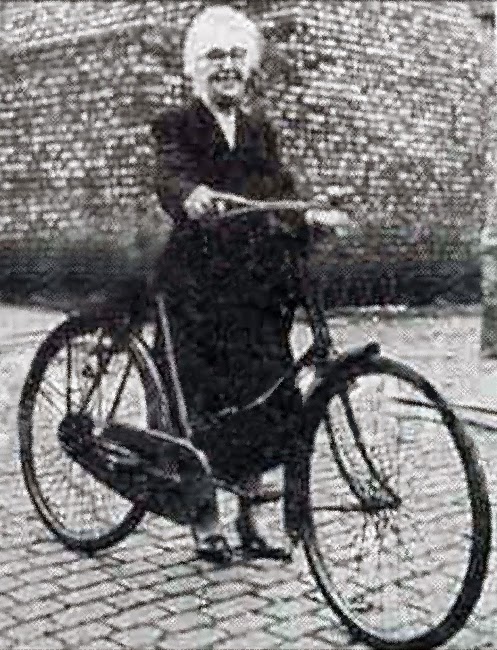 I hope I haven't made too many incorrect assumptions in piecing together this account. Some of it is guesswork, some of it is based on records, but it feels about right to me and I've enjoyed playing detective again.
Posted by Jane Housham at 17:58

Really enjoyed following the detective work. I'm still wondering though - what was the Rev and his wonderful wife doing in your mum's shed?

Oh yes! You're right, I forgot about that part. I think she must have bought a job lot of photos at an auction, or perhap they came in a trunk or something and she only wanted the trunk and not the photos. Anyway, they're giving me a lot of food for thought now -- even if I'll never unlock the identities of 99% of the people.

You should write a murder mystery novel - I love the way your research allows you to tie together some loose ends and make educated guesses with others. These posts always make a jolly good read!

I think Joanna is spot on. You should write a book! I loved following the trail of Milo and the Reverend Bott and wondering why they were in your Mum's shed. Perhaps she did buy a job lot of photos but what a wonderful tale you've woven with them. My favourite is that chap with the moustache and mutton chop sideburns. Looks like an upright citizen if ever I saw one!

Hi Jane, it is really impressive how you dive into this detective work! Have no glue how you do it, but I agree you should write a book. I guess it would be no problem for you to invent a story around those facts you discovered.
Thanks for your comment, its not very painful anymore, but I have to be careful not to walk to much.
barbara bee