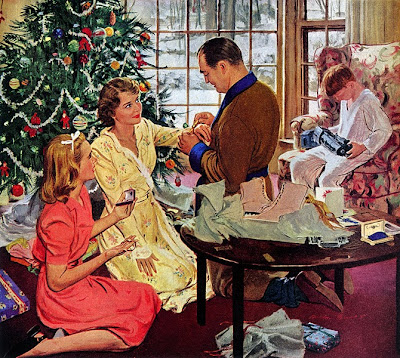 I hope everyone had a lovely day yesterday. Somehow or other, perhaps not quite by mutual consent, it was decided that we would spend yesterday entirely 'off Net'. Our internet connection was switched off at the hub and although it had been mooted that all phones, iPads, tablets and gizmos would be collected in a box and locked away, we decided to take it on trust that we would all stay away from the internet for the day.

For breakfast we had smoked salmon on slices of brown bread that had been made in the breadmaker overnight -- what a wonderful thing the breadmaker is and yet we hardly ever use it. Then the 'children' played games while David made all these lovely things for our 'elevenses': Bucks Fizz, parmesan biscuits, fruity cousins of 'pigs in blankets' (I don't know of a name for apricots in bacon -- 'apes in anoraks'?), Nigella's nuts (WARNING: do not eat Nigella's delicious nuts for breakfast on Boxing Day as I have just done, giving myself indigestion as a punishment for being greedy and trying to find all the pecans), and homemade focaccia with oil and balsamic vinegar to dip it in. 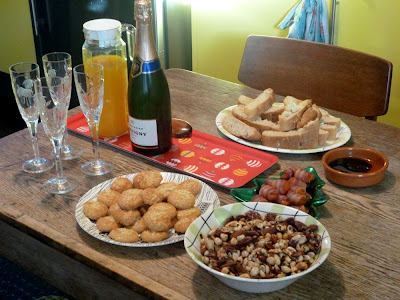 The 'children' were in inverted commas just above as I'm afraid I became the third child of the family yesterday, playing Continuo and Cranium Ziggity and loads of other games from our long-neglected games cupboard. David has become very keen on cooking and insisted on doing everything -- who am I to spoil his fun? So it was picture consequences for me and the kids: 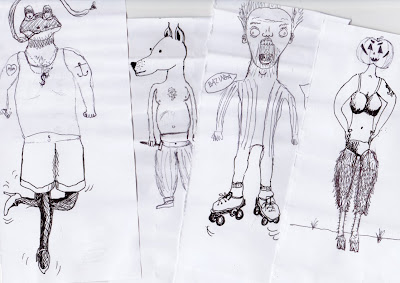 Then, while Christmas dinner was cooking, we all did Dora's amazing quiz which included a picture round where we had to identify places round the house and special rounds on family enthusiasms: I was gutted to do so badly in the Breaking Bad and Sweden rounds. Gutted. 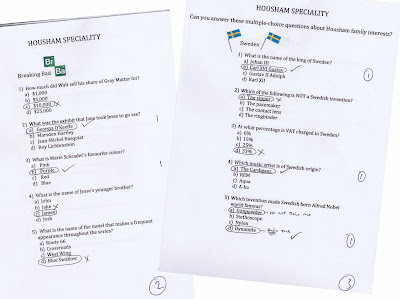 In fact I came last overall in the quiz, which I just couldn't believe. Had to hide my humiliation after a brief howl of defeat escaped my lips.
Part of the 'analogue' day was that each of us should devise an activity. Dora did her quiz, Charlie arranged Rudolf the Red-Nosed Reindeer for guitar (him), ukelele (Dora), shaker (David) and electronic xylophone (me -- appallingly. It seems all my music skills have completely left me -- hardly surprising when I've barely touched an instrument for about thirty years). That was fun.
Oh dear, my activity was a disaster! The other three were sitting round the table in their blindfolds and I had only just spooned the first teaspoonful of sardines into David's mouth when his protestations made the other two refuse to play 'What's the food?' -- so my plans for preserved ginger, Brie, garlic at al had to be abandoned.
After that we played 'Whatto Lotto', the game I invented when the kids were little and which I would love to get manufactured. It works! It's fun! And you can learn about the thingness of things from it. Maybe in 2014...
My second try at an idea for something to do was a bit hit and miss too -- find something to read out to everybody else. Dora read a great bit from Morrissey's autobiography about his schooldays, Charlie read a funny poem by John Agard, David did a comic recitation from the Popular Comic Reciter of 1890 and I tried to read a bit from The Young Visiters by Daisy Ashford, which didn't go well. 'But she was only nine!' didn't cut it. 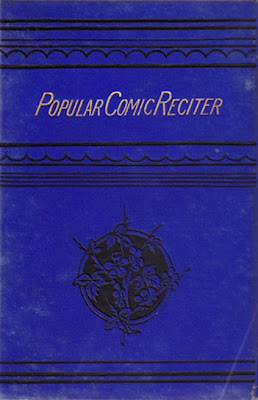 Does this day sound like your idea of heaven or hell? It was heaven, honestly. The day passed in a flash and we sat down to our lovely dinner at about 5.30pm. The telly wasn't verboten so after that we watched the tail end of 'Call the Midwife', just so we could see Miranda looking awful in a wig and twin set.
Not long after that I retired to bed to read my book. It was a lovely day, even if I turned out to be the naughtiest child.
Posted by Jane Housham at 13:12

Blimey, I wish someone would play games with me in this house. This is the non-competitive household of your nightmares - though I did manage a game of Catto while out for a walk today. Fortunately my brother lives round the corner and he was DELIGHTED with the tin box of accoutrements that accompanied the little book of Parlour Games I gave him for Christmas. Even better - the book was wrapped and he couldn't guess what all the stuff in the tin was for. Haven't seen him that happy with a present since I bought him a Chelsea kit when he was about eight years old.

That sounds like an amazing day! I love all sorts of games but the rest of my household are not so keen. Especially love your picture consequences.

This sounds a fab day and I only wish mine had been as much fun. What joy to retire to bed early with a book and just let the internet pass you by for a day. I admire your fortitude. Bravo to all!