Is there any help for my new obsession?


So I've just got my new website up and running. You'd think I would be focused on it, and also that I'd be doing paintings to feed it. But no. In fact I'm obsessively researching my family tree, using a fortnight's free trial on Ancestry.co.uk.
Actually, the genealogy was itself a sort of side-turn from the thing that first distracted me from painting which was an idea to write about my mum in some form or other. To prepare for that, I started collating all the ideas and diary entries and thoughts I've been keeping for years, plus letters, newspaper cuttings and writings by Mum. Then I extended it to my mum's mum as she too was a keen writer of articles and autobiography. The table is already 101 pages long and I've barely begun. And it's completely separate from the photographs, of which there are hundreds, going back to the early 1900s. If I carry on, I feel it will be like living inside a Borges story I'm sure I read in the Seventies, where the record of someone's life subsumes their actual life.

After a while, the table was getting so formless that I decided it needed a framework of facts and dates. That's where Ancestry.co.uk came in. I went on it to fill in the birth and death dates of various fairly close relatives but within about an hour I was hopelessly addicted. The actions you need to perform on the Ancestry website in order to pin down the life-facts of your relatives perfectly fulfil the same need in me to finish jigsaw puzzles, play spot-the-difference puzzles and keep Gallery Five gift-tags from the 1970s. And the element of detective work is totally gratifying, especially challenges such as chasing down female relatives' maiden names. I've only been researching for 9 days but there are already 307 people on my family tree. If you can link your tree with someone else's on the site, then whole branches can be added with just a few clicks.
As well as the amazing wealth of records that you can search via the Ancestry website, I have a few family documents that provide further details of some family members. My granny was very keen on family history and kept the old handwritten lists at the top of this post which she must have inherited in her turn. And among her possessions was the mourning card above, which was for her uncle who died in childhood in 1864.

As I've been spending almost every waking moment when I haven't been at work trawling through census records and birth, marriage and death indexes, I decided I had to force myself to focus on the actual point of it all. By this point I was researching very distant relatives just for the satisfaction of finding their parents or spouse. So I decided just to establish the birth, marriage and death dates of my direct relatives, going back to Jonas Mattison, born in Richmond, Yorkshire in 1795, plus their children, where they lived and what they did for a living. Jonas has the postition of paterfamilias on the second document above and was my great great great great grandfather.

So I had managed to limit the scope of my researches (notwithstanding that when my free two weeks run out I'm definitely going to have a go on the 'premium' membership of Ancestry.com because then I'll get access to electoral rolls, divorce records, baptisms, ooh, I can't wait. They sure know what they're doing with their business model...) and yesterday morning I sat down to fill in any missing data in my new list of need-to-knows. I had what I needed for my great great great grandparents Thomas and Mary. And I knew that my great great grandfather Christopher had been born in 1858 and spent his childhood in this house on Castle Hill, Richmond: 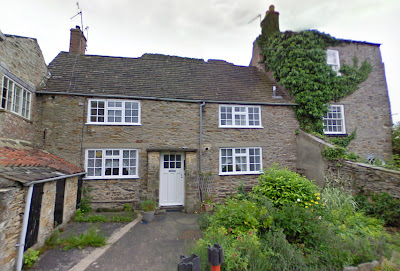 When Christopher was 24 he married a Scottish woman called Marion and they lived in Leeming near Bedale, about 12 miles from Richmond. Their reason for being there was so that Christopher could work in his uncle William's iron foundry as an iron moulder. The business was started in 1851 and became known as F. Mattison and Co, the F being Francis, William's son. They made agricultural implements and also many of the milestones used on roads all over the North Riding of Yorkshire, and also, in the 1890s, a huge waterwheel for a nearby mill (at Crakehall). The premises still stand today:
I wanted to know where Christopher and Marion had lived, along with their son, my great grandfather John. They didn't live with the foundry owners. Father and son, William and Francis, lived next door to each other in two adjoining houses just next to their business, called Elm Tree House and The Poplars. Here are some of their two families in their garden: 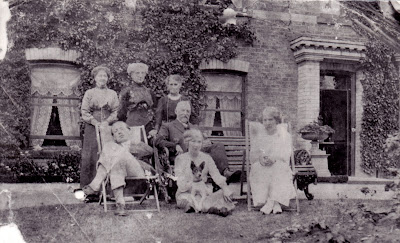 Unfortunately I don't know who anyone is individually. Perhaps the gentleman on the bench is Francis. I think the two houses shared the garden as the door you can see is that of the Poplars, the right-hand house. Here's how they look today: 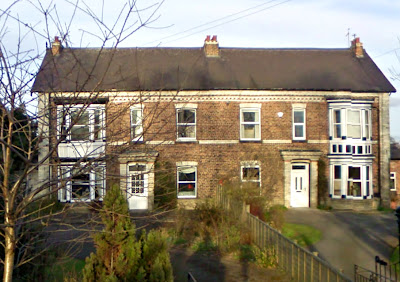 You can see that there's a fence dividing the garden now. But you can also see that the door and smaller windows are still the same.
However, my direct relative Christopher didn't live here -- so where did he live? In the 1891 census returns, he lived on Leeming Lane but this is a very long road and none of the house numbers is specified.:

I tried (for hours!) to work out which house they might have lived in. I wanted to see it with my own eyes on Google Street View. Here's where I fell down a giant rabbit hole where time no longer meant anything...
I looked backwards and forwards on the census return for any identifiable house or place such as a mill, to which I could work out the relation to Christopher's house. I found a pub, two pages on -- The Crown Inn:

So if I could locate the Crown Inn I would be very close to pinpointing Christopher and Marion's gaff. I found two photographs of the Crown: 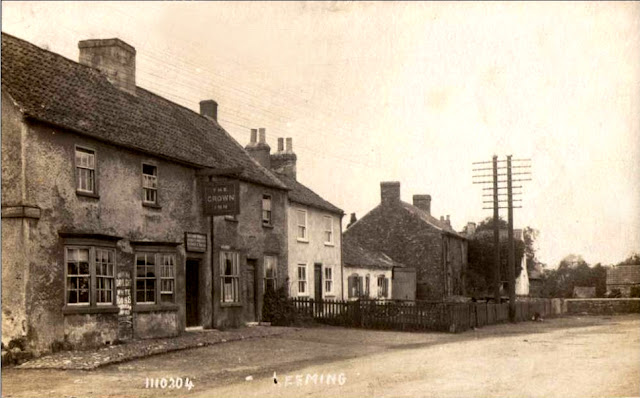 I also found a very moving account by Audrey Milner in Pontefract of her husband Matthew's time as an airman stationed at RAF Leeming. Audrey used to stay at the Crown Inn when she visited Matthew and she said it backed onto the air strip which meant that she could count the planes back in from their missions. This narrowed the possible location down considerably, as you'll see from this aerial photo: 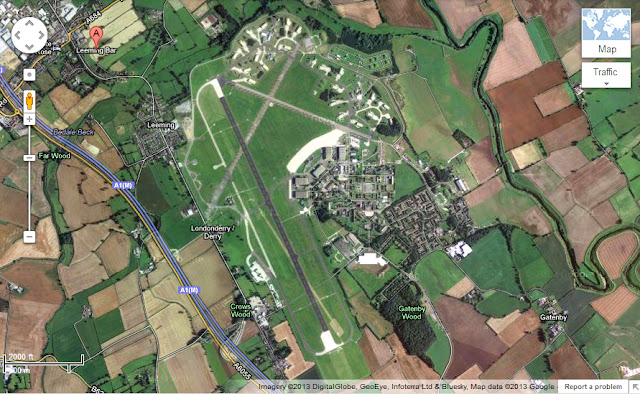 I thought that I could surely locate the Crown by 'walking' up and down Leeming Lane on Street View, looking all around, and spotting some detail of one or other of the old photos. But although I fear I spent several hours doing this yesterday (without even realising how much time was passing), I failed to locate the Crown. There's quite a lot of more recent housing now, so perhaps it was bulldozed. I couldn't find a useable reference to its location anywhere online, so if any pub historian knows where it was, please put me out of my misery. The irony is that, even if I locate the Crown, I still won't know exactly where Christopher and Marion lived. They moved back to Richmond in later life and Christopher had a job as a lamplighter for the Corporation. My granny has written about her memories of going out with him on his rounds when she was very little (he died when she was five).
So this is all just to explain why I'm not doing any painting at the moment...
Posted by Jane Housham at 20:27

I love that little detail - born at "20 minutes to 3 in the morning", and the beautiful handwriting.

My brother became similarly obsessed but had great difficulty because the spelling of our surname was corrupted due to illiteracy. Just as well, I reckon.

This is great, and I know just how the bug has bitten you! I once triumphantly discovered online an ancient photo of my great-grandfather standing proudly beside his horse and cart - and then realised it was 3 o'clock in the morning....
Good luck with your researches.

Hi Jane probably way too late for your research but my Great Grandparents owned The Crown Inn and it was during my quest to find pictures of my Great Grandfather that I found your post. Sadly The Crown is no more and has been built upon but I will ask my family if they know of your relatives

Hi Ask2346, thanks so much for your comment -- I hope you see this. It's very kind of you to offer to ask your family about mine. I'd love to know if they do remember anything. Thanks for getting in touch x