The far sides of theatre 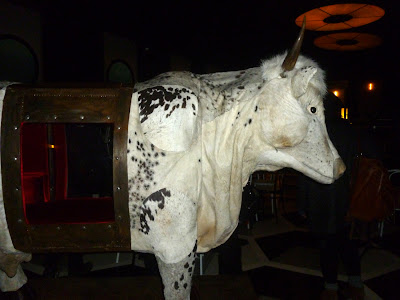 I've been treated to the theatre this weekend, which is a rare thing indeed -- both to go to the theatre (too rare, to my shame) and to be treated -- a new friend I met on the Martin Parr weekend very generously invited me to go with her to see The Architects by Shunt, the London-based site-specific company. 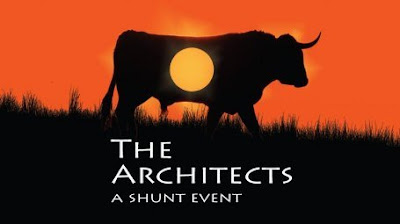 The production stretched the etiolated theatre-appreciating parts of my brain to their maximum extension, a feeling I love. But, put simply, it was completely bonkers. In a pretty good way. It took place in an empty biscuit factory in Bermondsey. (As an aside,  before the theatre I was very excited to visit the unbelievably trendy foody 'quarter' under the railway arches at Maltby St, including the St John Bakery that, hitherto, I had only read about on Spitalfields Life.) Bermondsey is not only 'up and come', it seemed to be pulsating with confidence and a sense of its own coolness.
We stepped into the biscuit factory through a very unassuming door and found ourselves in a plywood labyrinth which reduced the very high ceilings of the space down to human height. It most reminded me of the temporary structure built to house Peter Blake's pop-up Museum of Everything in Primrose Hill last year. That's the trouble with novel experiences, these days we're exposed to such a rich mix of thrills and novelties, in an effort to engage our jaded minds, that it's hard to find a space in our heads where things feel truly fresh. The main 'point' of The Architects is, I think, to disorient and bewilder, to give the audience a bit of a spooky frisson, but, although I really wanted to be spooked, I just stayed ploddily unmoved, which made me feel disappointed in myself, my leadenness -- presumably this was not really the idea.
I don't want to give too much away about the production as any potential for thrilling that it has will be eroded by people knowing too much about what to expect. It's a very strange, incoherent riff on the myth of the Minotaur but perhaps also an attempt to create a Ship of Fools. And it includes a long speech about architecture which doesn't seem to relate to very much else that's going on. And there was some darkness and some bizarre tableaux and then it was over. No one told us it was over and there was no applause. We just kind of seeped away by silent consent. I couldn't help wondering if we had been a particularly lumpen, unresponsive audience or whether it's the same at each performance: people bemused, keeping themselves to themselves in case some sort of outrage is perpetrated against them. The only 'outrage' was a kiss, but I'm saying too much. The cow with the velvet insides at the top of the post was a prop which referred to Pasiphae's predilections from which the Minotaur resulted... 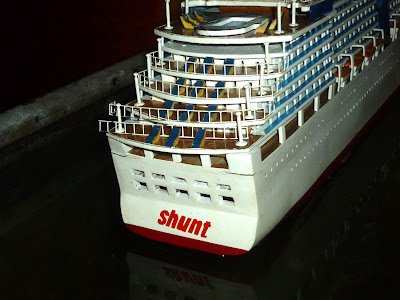 In stark contrast to this fascinatingly weird piece of theatre, a couple of weeks ago I took my daughter to see Swan Lake performed by the Royal Ballet at the Royal Opera House as a birthday treat. It was as much a treat for me as for her. I haven't seen many ballet productions and had never been inside the Royal Opera House before. It was extremely sumptuous. I felt a little bit like a street urchin who had been admitted into the grocer's shop and given a sugar plum because it's Christmas -- in fact during the second interval D was a little bit cross because a splendidly affluent couple asked us if we'd like their leftover smoked salmon sandwiches (a bit too pricey for us to indulge in and anyway we'd been for a very nice meal beforehand...) -- I on the other hand was delighted. I'm not too proud for charity. 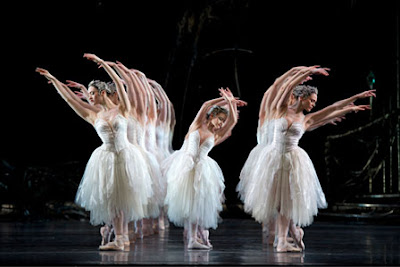 There's a point to this comparison... I enjoyed the ballet immensely. I thought it was magical. The sets and costumes were intended to make it seem contemporaneous to Tchaikovsky's music and Petipa's original choreography, so late 19th century. It was rich, cluttered, with stiff suits for the men and heavy brocade gowns for the women (not the swans who as you can see were downy and ethereal). I loved all the set pieces -- the way each dance is like a 'turn' for the pleasure of the others watching onstage, theatre within theatre. My engagement with it didn't flag once. But the next day I looked up reviews of the production, in the Guardian, Telegraph and so on and they were all pretty negative, saying the sets were awful, the production tired and uninspired, wasn't it time to retire it altogether? This was very interesting to me as it showed me I lack the critical capacity to make these sorts of judgements about ballet. I just haven't seen enough of it. To me it was as though I'd been transported back to an evening in 1876 and a performance of a wonderful new work with exquisite dancers.
So while I feel confident in voicing my misgivings about the Shunt piece (though this interview fills in some of the blanks), when it comes to ballet I'm the critical equivalent of a naive child. Something like this:

Jane, what a coincidence, we're off to The Architects tomorrow! We've been avid fans of Shunt's productions for years and have loved them all. As a result I did have high expectations about this one - but after reading your review maybe I'll lower them and just hope there's something to enjoy...

A really interesting post. I wonder whether critics end up a little jaded from seeing classical pieces done again and again, so that a more traditional interpretation just doesn't sufficiently excite.

Have never seen any Shunt productions.Still not sure whether I should...