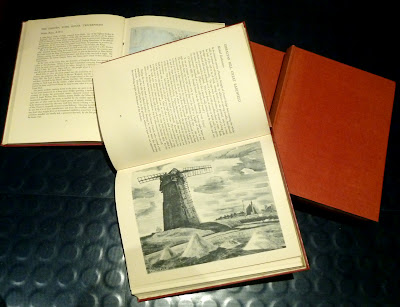 It's rather bad form to buy oneself a Christmas present, but I'm afraid that, while I was searching the far corners of eBay for suitably esoteric collectibles for my nearest and dearest, I couldn't resist a bargain-priced set of the four volumes of Recording Britain.
When war broke out in 1939 Sir Kenneth Clark (though he probably wasn't yet a Sir) decided to send artists out across England, Wales and Scotland to make a record of the places that make up the visual fabric of our country. It was a clever kind of propaganda exercise (by which I don't mean to imply any sort of disapproval) -- to show us one of the reasons why the war was worth fighting: the potential destruction of so much we held dear. The V & A now hold the collection of original paintings and drawings of places in England and Wales (the Scottish works are in the Museum Collections Unit at the University of St. Andrews). This page on the V & A website will tell you much more about the whole project.
Clark intended the scheme to be a help to artists, as much as anything else, for with the outbreak of war the market for art became dramatically depressed. He raised enough money to be able to pay his team of recorders a modest sum as they toured the country. The criterion for their choice of subject matter was not simply to find places that might be destroyed by bombs; it was also to key into the more nebulous but pervasive anxiety people felt then (particularly then but, of course, ever since too) about the passing of a whole way of life: modernisation and urbanisation were, it was felt, riding roughshod over 'old England', trampling people, buildings and landscapes as endless terraced houses were thrown up and factories replaced smithies and craftsmen's workshops.
When the four books arrived, I have to confess I was a little disappointed. Just a little. The books were published between 1946 and 1949, immediately after the end of the war, when the country was still suffering from terrible deprivation. On a quick glance through, the printing seemed rather insipid with many of the images in dull sepia tones. On the V & A website, by contrast, the paintings appear in clear, natural colours -- much nicer. Gill Saunders' 2011 book about the project seems to have colour reproductions of the originals and I can see I'll probably have to get it as well. But it feels good to own the four books that represent the project in its original form. I'm only showing a very few images this time, but there are paintings by many wonderful artists from the first half of the twentieth century who I absolutely love: Kenneth Rowntree, John Piper (though seemingly rather uninspired and keeping his genius in check for some reason -- perhaps because the commission was to record not interpret), Barbara Jones, Ruskin Spear, Rowland Hilder) and others new to me but certainly to be added to the list of cherished artists: Phyllis Dimond, Stanley Anderson are just two I've noticed so far. I haven't yet had time to really sit down and go through the four books lingeringly. In fact the more I look, the more treasures I'm finding. I will have to blog about them in more detail later, I think.
I wonder how many of the scenes recorded did actually meet the fate that was feared, how many are no longer there? Happily the conservation lobby also got the wind in its sails at about the same time and many precious buildings and vistas have been preserved, despite fears to the contrary. Certain the Gibraltar Mill at Great Bardfield (seen in the first picture above) still stands in its fields, even if it's been converted into a dwelling now:
The reason I looked up Great Bardfield (in Essex) is that it was the home of so many wonderful artists, including Edward Bawden and Eric Ravilious, but neither of these artists' work features in the four books -- due, no doubt, to the fact that they both served as official war artists, Ravilious, sadly, never returning. 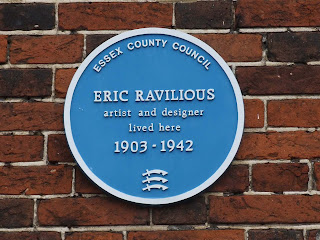 Of all the paintings made during wartime and which served -- and serve -- to remind us why it was worth fighting to preserve our freedom, the one that most moves me is The Cornfield by John Nash (painted in 1918): 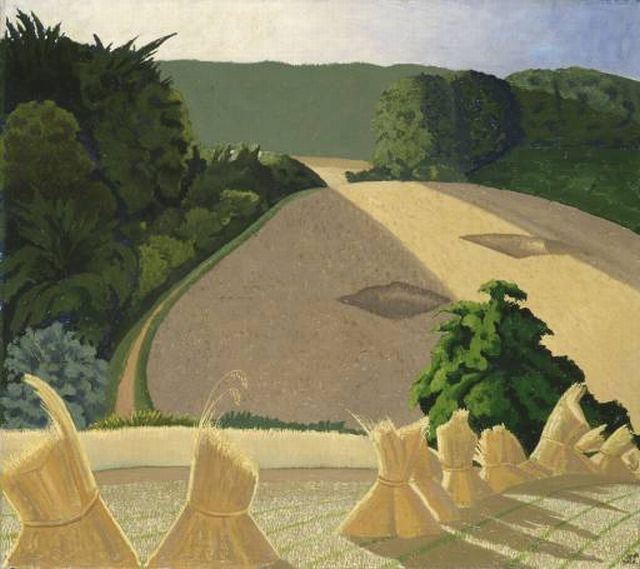 Click on this link tothe Tate website to listen to a poem by John Burnside inspired by this painting.
Posted by Jane Housham at 12:59

What a lovely find and despite your initial slight disappointment I'm sure you'll discover lots of treasures on closer inspection. Fascinating to see the modern-day photos too around Great Bardfield - I'm a big Bawden and Ravilious fan.

We have these books too - John is a big fan and he's often to be found glancing through these or his book of Edwin Smith photos. We once set out on a quest to try to identify the Great Bardfield buildings illustrated in the King Penguin "Our Village" and many of them were recognisable and some, one of the pubs and the butcher's, still used as originally intended. The village still seemed out of the way - maybe that's why it retained its charm.

I have a vision of you out there in the Ebay bandit country unearthing long forgetten gems to treat yourself too... and why not? There is nothing wrong in my book with buying a present for yourself. A lot of wartime and post war books carry a disclaimer about paper quality, mainly due to the shortage of getting it, but how lovely to have an orginal. That image from John Nash is perfect. Thank you for the poetry link too. A beautiful post and I shall hold you to that promise, please, to share more of it at a future date!

I have to confess I hadn't realised that the Recording Britain project had been preserved in book form. The books do look a bit weary, but not bad by the standards of the day. I'm not that desperate about the recent V&A book either, but there is another book out there that has colour reproductions of some lovely pictures.

Kenneth Rowntree and Barbara Jones are the stand-out artists for me, with Michael (?) Rothenstein also very good. These artists infused their pictures with some spirit, event though they were being paid a pittance.

You might be interested to know that the project was funded by an American charity - but whether the aim was to encourage support for 'the old country' I don't know.