As soon as school broke up, we nipped over to Berlin for a few days, just before Christmas. We were back in time to hang our stockings up on Christmas Eve. I really wanted to blog about it before Christmas was over but it's taken me all this time to get to grips with my photos. So all my kitsch photos of plaster Baby Jesuses and glowing stars are looking a little past it, I'm afraid. Let's get them out of the way without more ado. It was wonderfully Christmassy, which was the main reason we went. 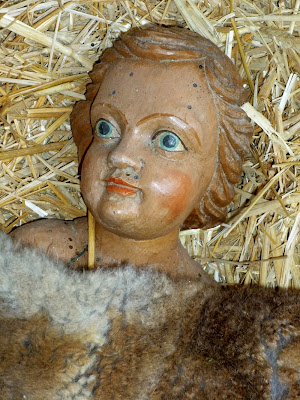 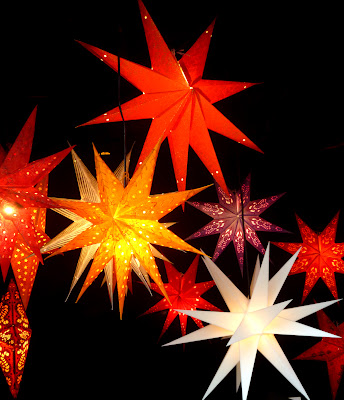 Having never been to Berlin before, I tried to mug up on the city before we left, watching Funeral in Berlin, The Spy Who Came in from the Cold and Wings of Desire and reading snippets of great books set in Berlin in the Berlin City Lit Guide from Oxygen Books (excellent series -- I had the New York one when we went to NYC last year). As all those films are set in the era of the Cold War and the Wall, it actually gave us a rather grim picture of paranoia, dereliction and division: of course, nothing could be further from the truth now.
We were staying in a very nice Spanish hotel (thank you, Trip Advisor -- and the unexpected Spanishness was a welcome extra) close to Friedrichstrasse U-bahn station -- it was hard to grasp that this had once been on the East side of the wall. The area was really more or less indistinguishable from a London shopping street, with familiar shops and multinational coffee and burger chains.
But it didn't take us long to find a more German aspect of the city. We walked along the banks of the Spree to Museum Island, which looked fantastic -- monumental. But we didn't have time for massive museums on this trip. There was the tail-end of a bric-a-brac market just opposite the island with quite enticing objects (1960s plastic toys and the like) but they must have seen us coming as they were very pricey -- too pricey. I only bought these two little ball-bearing puzzles for my collection.
We came out at the Opera House and found our first Christmas market. And it was starting to snow!
We immediately bought bratwurst (my son dared to have the infamous currywurst) and gluhwein ( and hot chocolate for the kids) and it was fantastic. My knees were burning with the cold by now, but the mulled wine made them feel as though they belonged to someone else. We slithered round the market in the surprisingly driving snow. Apart from my knees, we were just about dressed for it. 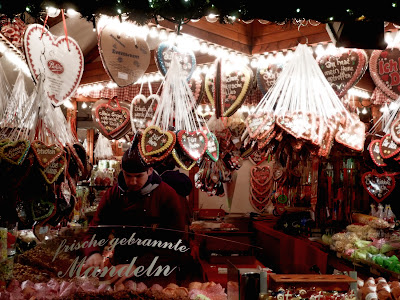 We came out onto Unter den Linden, whose name is so beautiful and had made me imagine a romantic, tree-lined street -- it was much grander than that, with massive buildings bristling with statuary. Just as we were starting to weary of the snow, we came to an exhibition of Modernist art from the Guggenheim collection, which I've just discovered is something to do with Deutsche Bank -- it was good, anyway, with, it seemed, one painting by all the key artists of the late 19th and early 20th century and a few extra Kandinskys thrown in for good measure. The shop was very imaginatively stocked.
We carried on down Unter den Linden to the Brandenburg Gate -- very handsome. We turned left and walked down to Potsdamer Platz, and had a brief foray into the Sony Centre. It was very twinkly and Christmassy but a bit soulless -- not many people were around. 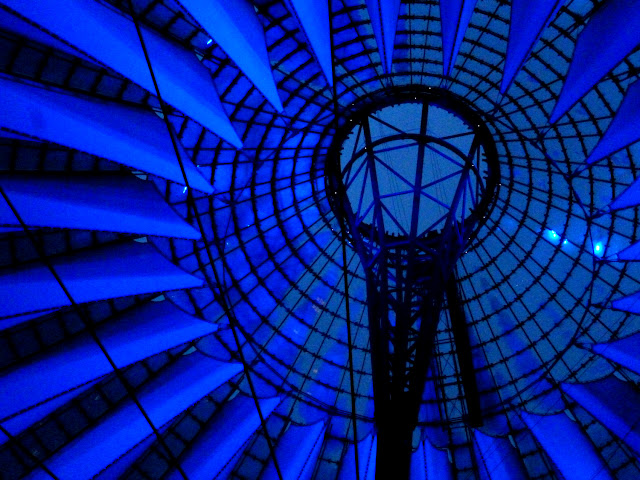 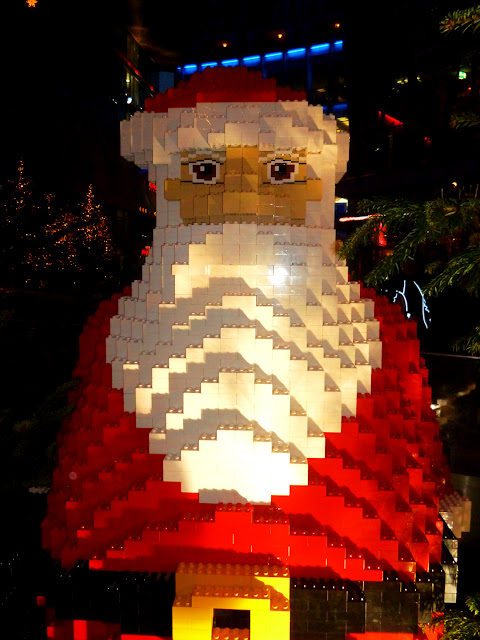 I was in charge of the sightseeing and my goal was to reach the art gallery at the Kulturforum (an arts complex akin to London's South Bank, I guess). It was snowing really hard and laying quite thickly already. We are English wusses and not used to going out in the snow (as soon as I see flakes falling at home I usually wimp out and refuse to drive in it). It was also dark by now but still very jolly in the centre of Berlin. We found the home of the Berlin Philharmonic where a concert was just about to begin. Everyone was arriving and I wished we'd thought to get tickets. The usher told us that the art gallery was just a bit further on.
We carried on but I don't think we actually found the gallery. It all seemed pretty shut. The building above was very dramatic in the snow -- I slipped on the marble pavement and chucked my camera in the snow but it was alright. 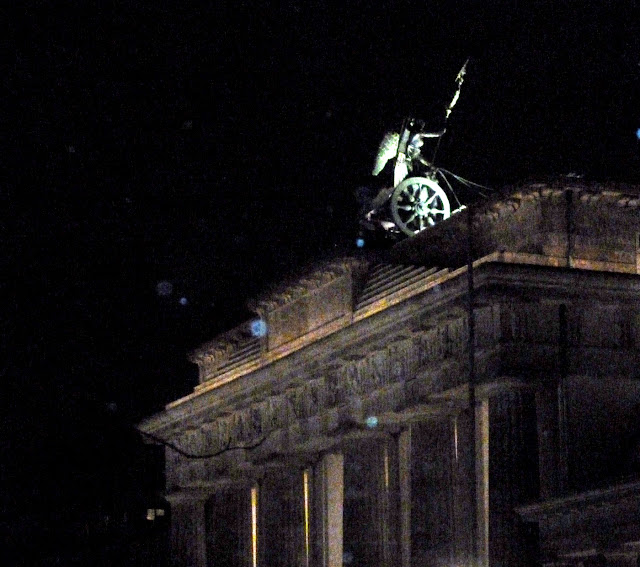 We decided to walk back to the hotel. The Brandenburg Gate looked brilliant all lit up. 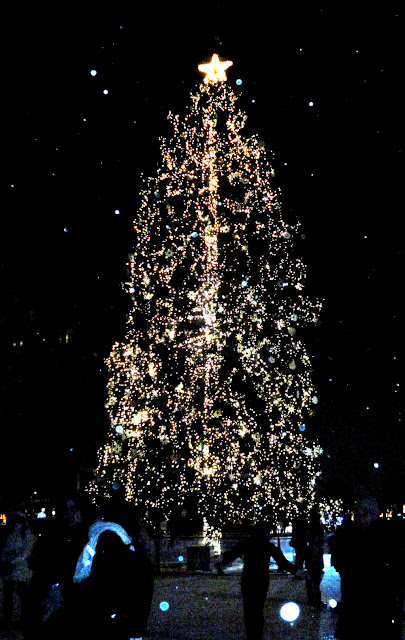 Back at the hotel we had dinner in the Spanish restaurant which, unfortunately (in my view) had opted for the sort of cuisine made famous by El Bulli, so everything was cubes of foam and soupcons of mousse and tiny balls of avocado and other such silliness. My 'beef Wellington' was not the hefty slab o' meat and pastry of tradition, but a tiny finger of ultra-rare meat with a literally transparent sliver of something that could not be called pastry twinkling diaphanously somewhere in its vicinity, like a stray sweet wrapper. Very very strange. I did not like the black nubs of pasta-like dough either! Eee, there's no pleasing some folk -- I would've been happier with a plate of mushy peas and a pork pie, really. But it was an interesting experience. The kids took it in their stride admirably.
The next day it was still snowing like mad. We set off on the U-bahn to Mauerpark flea market. 'Mauerpark' means 'wall park' and is a strip of green that was reclaimed from the no-man's-land alongside a section of the Wall after it came down -- reclaimed by the local people. 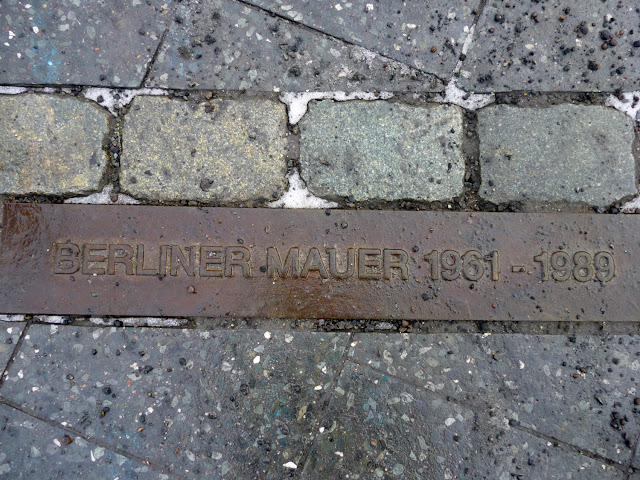 The flea market was a fairly familiar, Camden-style mix of hippy accoutrements, bags, clothes and vast arrays of quite saddening junk, which it was easy to imagine had been thrown up in the chaos the city has been through. Although I'm a very seasoned junk-rifler, it felt somehow wrong to be picking over these piles of belongings -- it made me think of Christian Boltanski's art works in memory of murdered Jews.
After the market we battled over to the Hamburger Bahnhof art gallery which is housed in an ex railway station. It was worth the traipse through the cold, wet slush as it was an incredible space. And you were allowed to take photos. I won't bore you with all my poor photos but there was a great collection of work by artists that I love: Anselm Kiefer, Warhold, Rauschenberg, Joseph Beuys, Thomas Struth. Kiefer's 1990 work, 'Lilith at the Red Sea' incorporates children's clothes and seems to refer with unflinching directness to the Holocaust (in a very similar way to Boltanski).
The temporary exhibition at the Hamburger Bahnhof was a retrospective of an artist I hadn't come across before, Martin Honert. It took me a while to tune in to his mindset but once I did I thought he was amazing. He is quite brilliantly singular, though I guess you could draw comparisons with Maurizio Cattelan, and his work to recreate photographs and memories as three-dimensional works actually put me in mind of Richter's blurred recreations of photos. 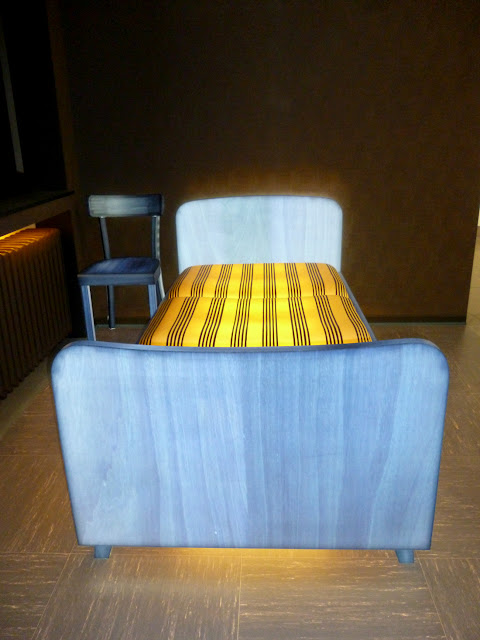 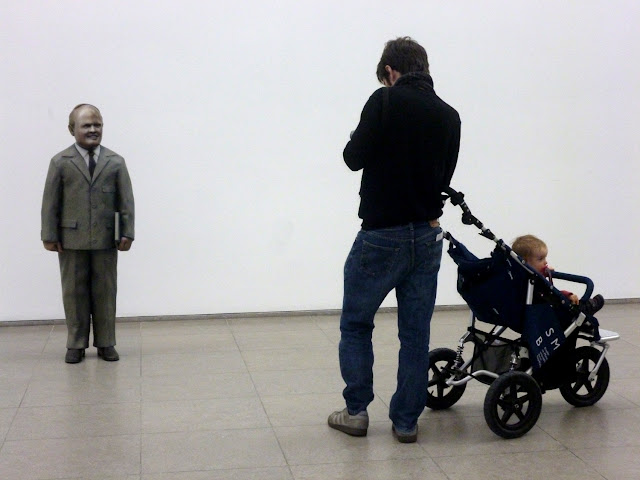 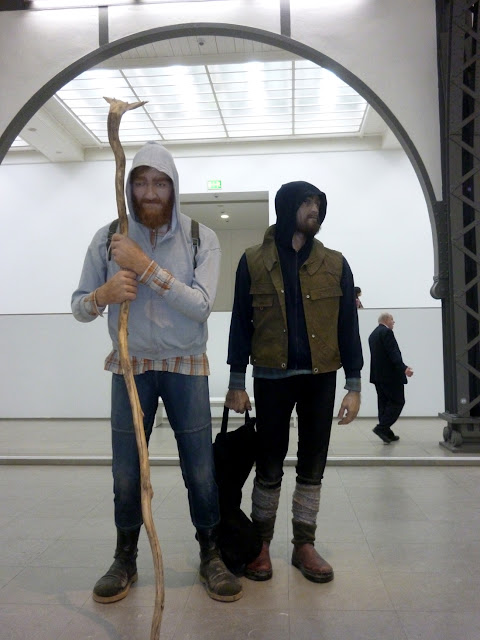 I was very very taken with Honert's art and it has given me so much to think about.
That evening we went to the Christmas market at Alexanderplatz, which is the biggest one, I think (there are around 25 Christmas markets in Berlin alone!). We had more gluhwein, more deep-fried batter, pretzels, and, wondrous, the best Christmas bauble shop it's possible to imagine -- a wonderland of silvered glass. We saw naughty nurse baubles, elephant baubles, cigars, seals, fish, gherkins, policemen, you name it. Incredible. I chose a glass chameleon.
On our last day in Berlin the snow had stopped and it had all melted away from the pavements. We went walking down Friedrichstrasse to yet another Christmas market. This one was in Gendarmenmarkt which was the most beautiful spot we saw while we were there. An exquisite eighteenth-century square with a French cathedral, a German cathedral, a concert hall and a statue of Schiller in the middle. The Christmas market was the most traditional of the three we went to and rather more upmarket. 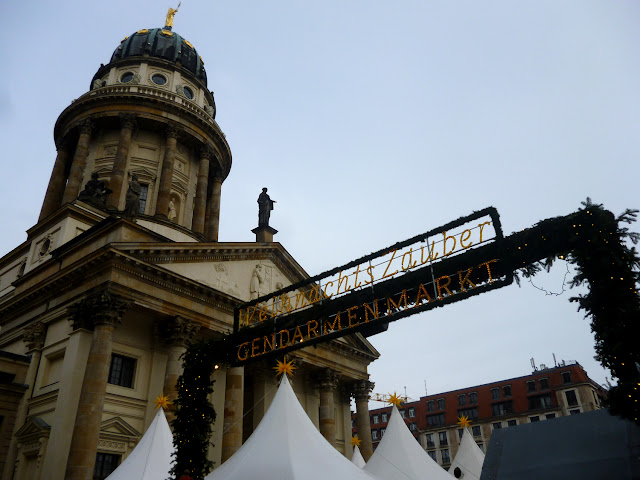 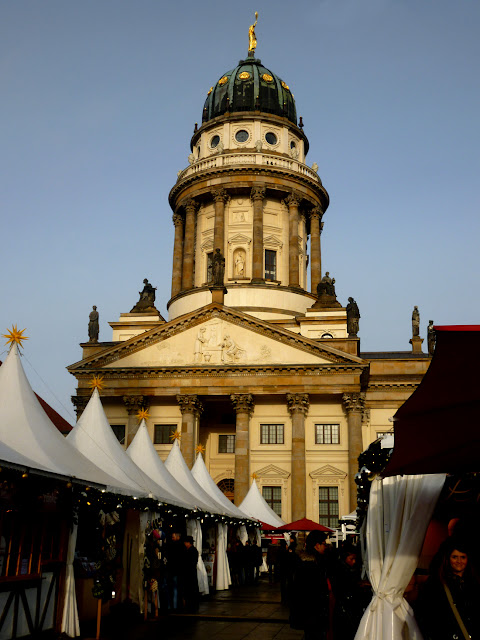 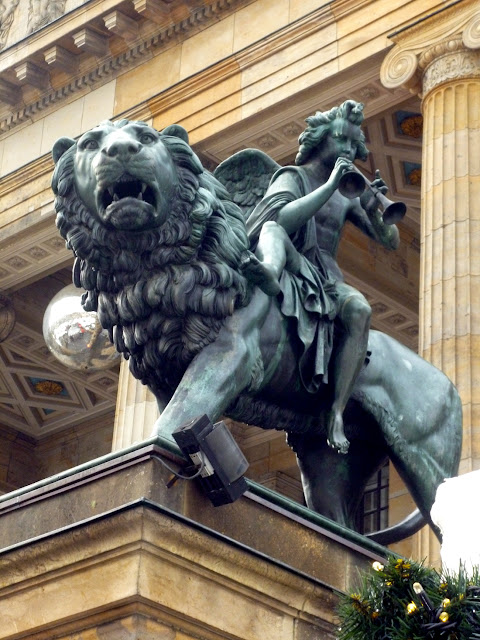 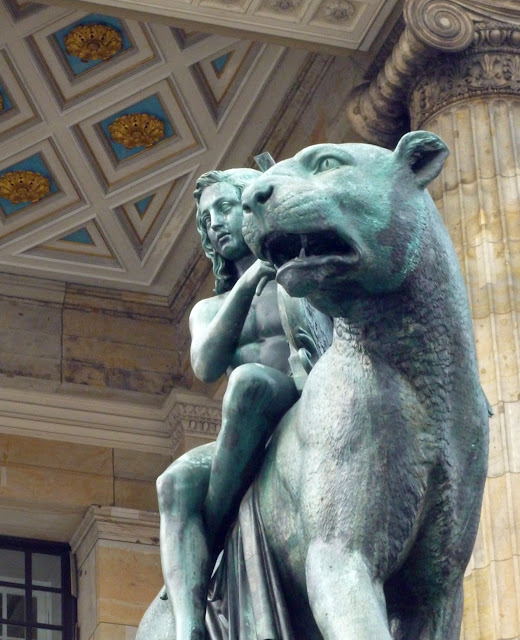 We also nipped into the trendy area north of Friedrichstrasse, Prenzlauerberg, to see if the KW art gallery was open but, alas, it wasn't. Their 'One to One' exhibition, on currently, is a series of artworks intended to be viewed by a single viewer and I think I would have found that really interesting. Some grafitti instead. 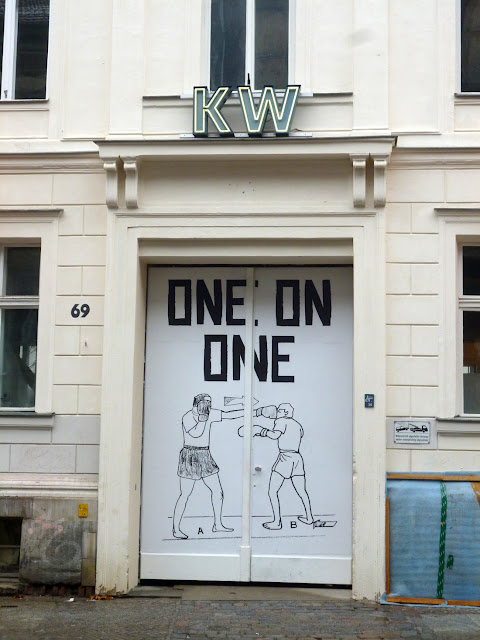 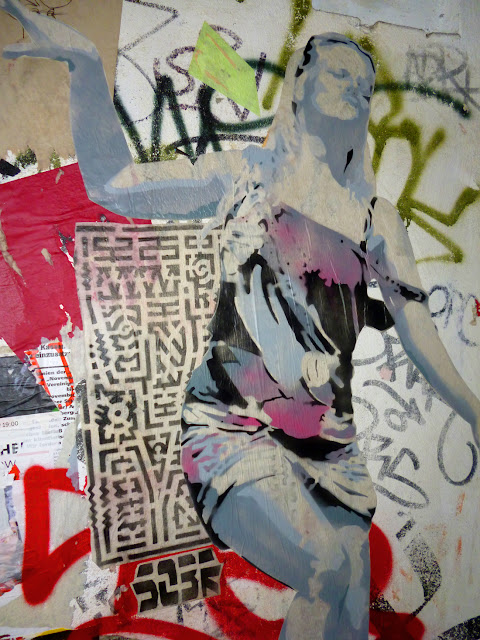 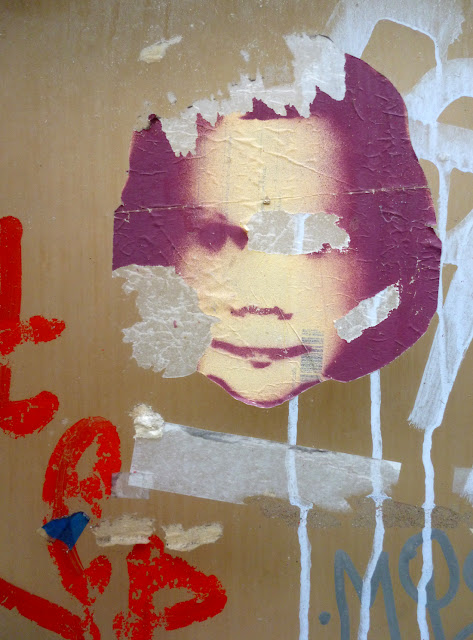 All too soon it was time to head to the airport and our own Christmas dinner the next day. It seemed very quiet at home after the intensity of three days in Berlin. It's a city I definitely want to go back to, for longer and in kinder weather. There's a mass of things I want to do there still. And now I also have a long list of books and films to take me deeper into the heart of Berlin.
Hope you had a wonderful Christmas...

Wow, Jane, how marvellous!! It all looks amazing. Love all your photos - do I detect a bit of the Martin Parr influence in the ones of the stallholders?

As ever, you seem to have packed in such a lot of cool stuff - a great mix of sightseeing, art and shopping.

Hope you had a great Christmas - I was just on the point of emailing you, so I will do that now.

By the way - I have a Christmas gherkin bauble just like your pic!

Ha! I was just about to ask if that was a gherkin.

Wonderful post Jane. The stallholder photo made me laugh out loud.

Wow, where to start? Like Elaine, I was thinking that if Martin Parr saw these he would be saying 'You've really got it liebchen...' You are a fantastic observer of things Jane and it's the caption as much as the picture that makes the stallholder a little piece of magic. I've never wanted to go to Berlin, ever, but you make it somewhere to put on the 'to do' list.

I feel like I was there, standing just behind you, though without the pre-trip research. Marvellous.

Wish I could say that in German.