Before my holidays are gone for ever -- Part 2 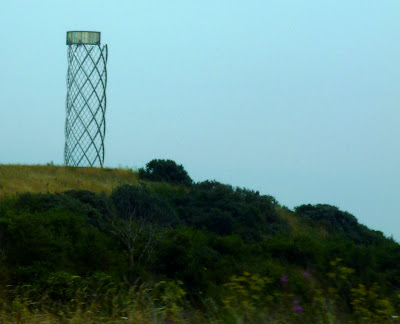 Back in September 2010 I blogged about my 'Swedish fantasy', in which I used Google Street View to cross the Oresund Bridge and 'tour' southern Sweden. I imagined spotting Olafur Eliasson's 'Movement Meter for Lernacken' up on the right as I 'drove' towards Malmo. This summer the fantasy became reality and the above photo (actually not much better than what you see on GoogleSV) was taken from our taxi as it came off the bridge and bore us towards Malmo. I just took it to record the weird feeling of virtual reality becoming 'real reality'. 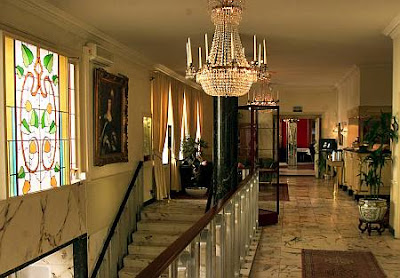 In Malmo we stayed at the Mayfair Tunneln Hotel, which I wouldn't mention except that the building turned out to have a very interesting history, having been a row of medieval shops, a seventeenth-century cellar-inn, the residence of the Governor of Skane (also in the 17th C), a sugar refinery (late 18th C), the offices of Malmo's chief newspaper and a library. The hotel was also very proud of it many famous visitors, including two of the Beatles (I think it was Paul and George) who once had a coffee down in the cellar bar after they had been refused entry to a nearby restaurant for lack of ties. 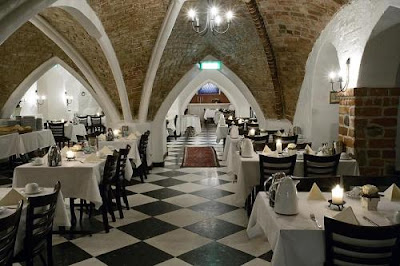 It was a very pleasant hotel (they changed the big doormat each day so that it read 'Have a good Monday', 'Have a good Tuesday' and so on) and the very best thing about it was the fantastic breakfast which was taken down in the 'Tunnel', the original medieval cellars. Sumptuous doesn't begin to describe it. I had to be dragged away each morning, or shamed into crawling away. 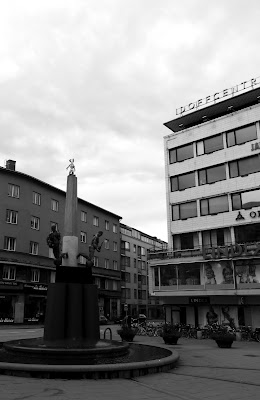 We liked Malmo a lot, but some of the architecture seemed to cry out to be rendered in black and white. The centre was very good for wandering about in. Streets would open up into big squares or smaller, more intimate ones. We came across a wondrous antique shop which had piles of stuff on the floor, quite a lot of it broken. It drew us further and further in and we found some of the Stig Lindberg Salix cups that we like so much. 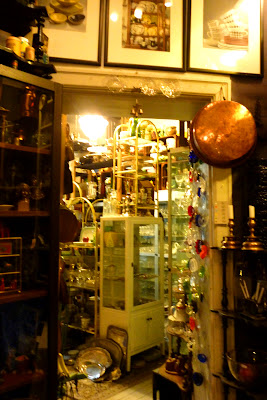 We also found some amazing charity shops, so huge that they were almost like department stores. Malmo has a strong recycling policy and has encouraged these big shops to try to increase the level of re-use of secondhand things. I could have spent hours in them but it didn't suit the others so much. I may have to go back for a secret charity-shop OD. 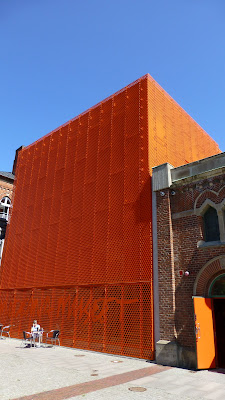 Malmo has an offshoot of the Stockholm Moderna Museet, the Modern Art Museum, housed in this old building encased in orange mesh. I love the mesh and the strange light effects it makes. 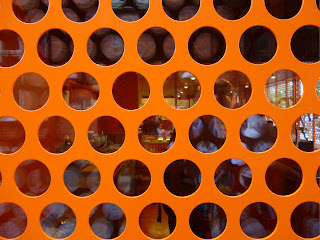 The beautiful ground floor space was given over to an Irving Penn retrospective, which we all really enjoyed. 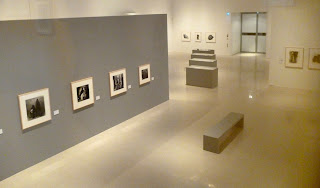 Upstairs there was a Niki de Saint Phalle show. I hadn't previously been a big fan of her work, but this retrospective caught my interest and I particularly liked her large pieces embedded with toys and other objects. These terrible photos don't begin to do them justice. I'd like to read a biography about her as the account of her life on Wikipedia is fascinating. 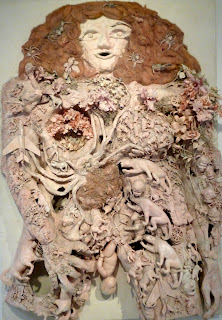 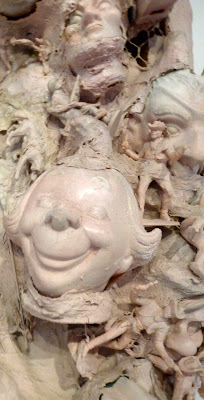 One of the best things we did in Malmo was to take the train to Lund, the nearby university town. Malmo train station itself was architecturally interesting and I loved the idea they'd had to play films of train journeys on the walls. The images move silently and dreamily and are very absorbing while you await the arrival of the real train. 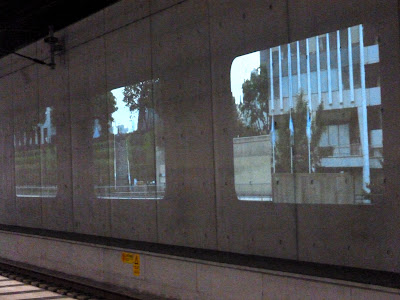 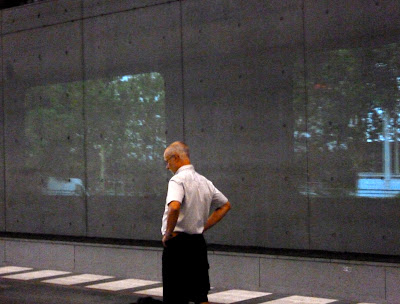 Lund was beautiful with an older feel than Malmo. The best thing about it, for me, was Kulturen, a museum similar in spirit to Skansen, the highlight of our trip to Stockholm last year. 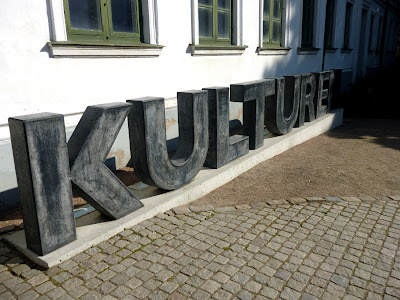 Like Skansen, Kulturen is an accumulation of old Swedish buildings with authentic interiors, but it had more of a museum element along the lines of, say, the V&A. There were lots of textile displays and an emphasis on handmade objects. It was all delightful. Again, I felt I could happily have spent much longer there. Just a few photos: 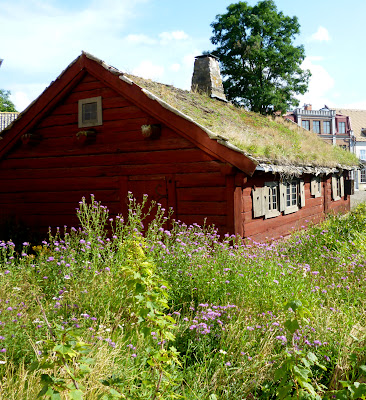 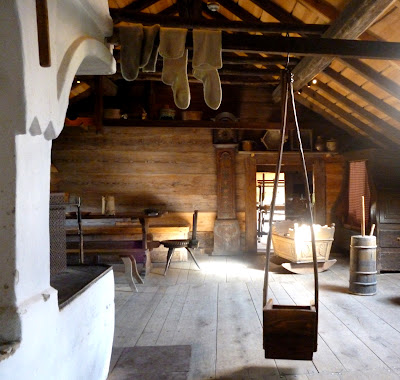 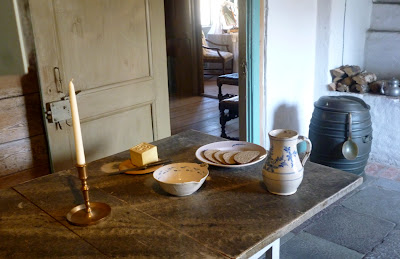 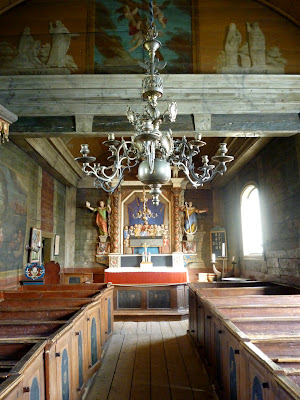 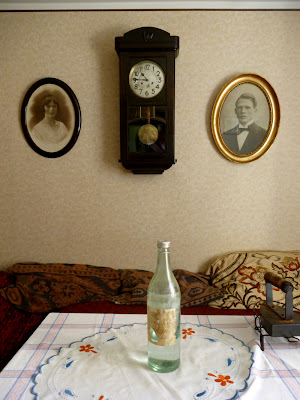 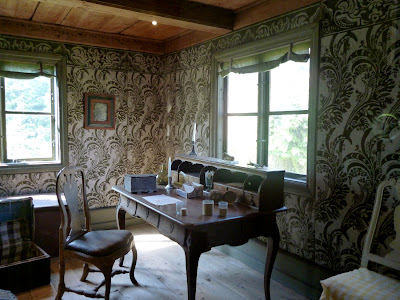 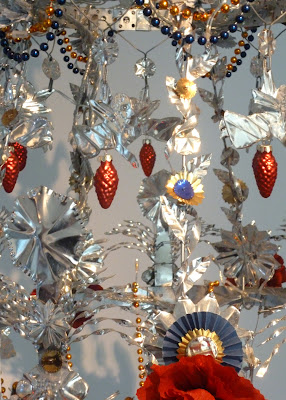 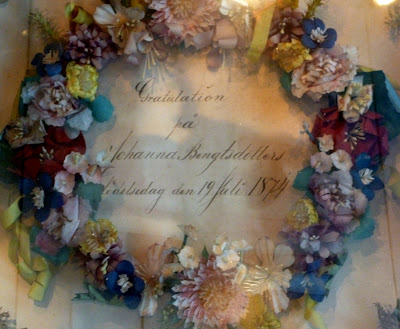 At Kulturen, as at Skansen, I again experienced the strange feeling of being connected to a past that isn't that of my own culture. I think it's just that these painstaking re-creations make the past feel very near; also I guess there are some fairly close links between England's past and that of Scandinavia (especially in the North-East, where I come from -- there are a lot of similarities in the local food, for example, such as rollmops and pease pudding...). But perhaps I would feel the same visceral connection if I visited a recreated American Indian site or an Inca city. Maybe it's just the imagination at work. 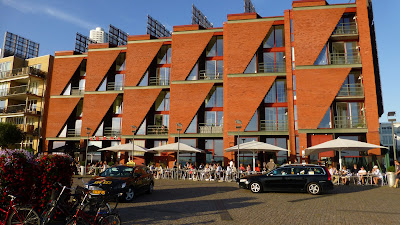 On our last evening in Malmo we went to a really lovely restaurant right on the waterfront in the newly redeveloped dock area, Salt och Brygga ('Salt and Bridge'). This restaurant serves only organic food and is part of the 'slow food' movement. Not only that, but everything about the place has been carefully thought through, right down to the candles and the seats. The candles are made of renewable materials and don't give off greenhouse gases. The leather on the seats has been tanned using bark instead of chromium. Such attention to detail is apparent in the food as well, which was absolutely beautiful, decorated with edible flowers (which we did eat). 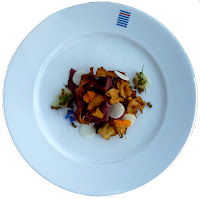 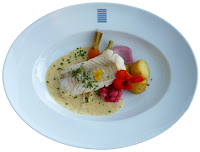 We sat outside and had a beautiful view of the Oresund Bridge as the sun went down.

And I was excited because in the taxi on the way there, we had passed the fantastic Turning Torso tower. I stuck my hand out of the window and snatched a photo which, amazingly, actually caught the tower. What an inspired structure. 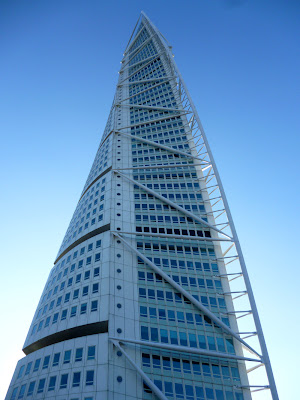 Our few days in Malmo were over and it was time to move on. We were hiring a car to drive down to the southern tip of Sweden. We nearly didn't make it out of the city as the car was so high tech we couldn't even start the engine -- then we couldn't work out how to let the handbrake off (a button did the trick eventually, after much stressful consultation of Google Translate on a mobile phone...). But eventually we were on Route E22 and heading for Wallander Land... (stay tuned for Pt 3).
Posted by Jane Housham at 08:53

Another fascinating trip around Sweden. Can't wait for Wallender land. You can't beat a bit of Kurt!Now I'm off to find out more about that Niki artist. Have never heard of her so need to fill in the knowledge gap.

Another wonderful tour! The hotel looks amazing, and that candelabra makes my heart sing!