"Wicked cathedral" -- a day of art 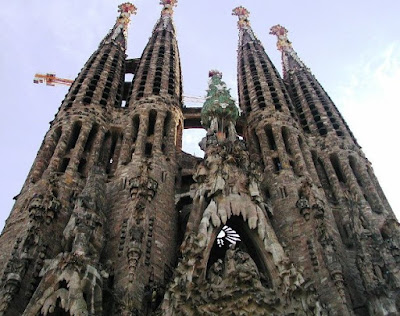 Yesterday I had a day in London doing galleries. It started very instructively. I got the train into London at 10.30 and it was full of Arsenal fans going down for the home match. Across from me were four Arsenal supporters, all men in their forties or fifties with buzzcut hair and football shirts. At a certain point I heard them start talking about Banksy so tuned into their conversation. They were big fans of Banksy and knew about the latest Banksy pieces to be discovered. One of them had seen the film, Exit Through the Gift Shop (very good film in my view). Then they moved on to Van Gogh and how he had never made any money from his art while he was alive. Finally they had a good old chat about Gaudi, Barcelona, Parc Guell and Gaudi's 'wicked cathedral'. I recount this not to laugh at them but, on the contrary, to celebrate their awareness of and enjoyment of art, a happy thing.
So I managed to get to five galleries in total yesterday, but two of them only had four artworks each on display. First I went to see Thomas Ruff at Gagosian then I walked a couple of minutes round the corner to Hauser & Wirth to see four new sculptures by Ron Mueck. The gallery director was giving a talk about the work, so at least I found out that Mueck's name is correctly pronounced 'Moo-eck' (and not 'Mook' or 'Merk' as I had tentatively thought). There's a debate about whether Mueck's incredibly lifelike but smaller- or larger-than-life pieces are 'not really art' because they are somehow 'just models', but I like them very much. There's no 'shame' in an artist aiming for realism and the pieces carry 'meaning' in just the same way as a photograph or a realistic painting might. In the new show, there was the woman carriying a bundle of sticks, pictured above, whose pale, blotchy skin was scratched by the jagged wood she was struggling with. What context should we imagine for her? Is she a primitive woman or someone living in a naturist commune in the backwoods of America, perhaps? She stood so beautifully on her pudgy feet, tipped back to counterbalance the weight of her load but solidly grounded. The other pieces were a half-sized man with his arms outstretched on a lilo who, having been mounted on the wall, resembled an odd kind of crucifixion, a very small model of a boy in jeans examining a stab wound in his side, and a huge chicken hanging upside down from a hook. Apparently Mueck makes all the items that his figures are adorned with himself -- their watches, sunglasses, clothes and so on. Everything looked absolutely authentic but on an altered scale. I don't think it would be enough if one's only question on seeing this art was, 'How does he do it' -- but it evokes a strong sense of presence and you feel a connectedness to these imaginary people as you stare at them. There's an element of the uncanny, too, but more of a sense of shared humanity (pace the chicken).
Next I went to a gallery I hadn't heard of previously, Pippy Houldsworth, just off Regents Street. The gallery was hosting a show where artist couples collaborated on a piece together. It was very lively and stimulating. In some of the work you could see two different hands at work, in others the collaboration was completely enmeshed.
Gallery 4 was Lucian Freud at the National Portrait Gallery, still really busy well into its run. Since I've started trying to paint people, I couldn't not go to this. You don't need me to tell you he was an amazing painter. Just his ability to mix colours was extraordinary. Looking at his images of nudes, both male and female, completely laid open, the artist I felt he connected to was Sickert, who had a similarly consuming gaze. There were some incredible late paintings where the 'bodies' were just laid around the artist's studio like corpses, in one case there was an extra body sticking out from under the bed where the main model lay with a dog. The paint gradually took on a rather terrifying blistered appearance as though it was reacting on the canvas, bubbling and scabbing. It was very powerful. You felt the rather fetid atmosphere of the studio with its grubby mattresses and piles of rags and it seemed like a ward in a field hospital where the 'disease' of art was being battled like a burning fever. 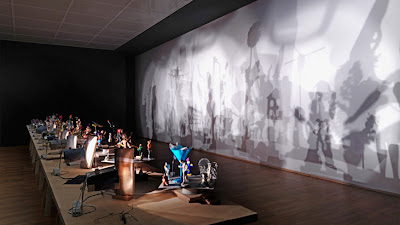 Finally I caught the bus to the Serpentine where Hans Peter Feldmann has a show. I've had my eye on Feldmann for a while as he is interested in things I'm also interested in -- found images, things grouped into sets, little books of found images. Quite a lot of the people at the show seemed to be rather nonplussed by it. I overheard quite a lot of people expressing disappointment or confusion. (I was also very amused by a woman who was 'mmm'-ing so enthusiastically to what her friend was saying that she was virtually singing: 'Mmmm...mmmm...MMM...MMMMM'.) A lot of the work did seem rather inconsequential. The room, pictured above, where rotating discs with arrangements of odd objects (an Eiffel Tower, a doll, little figurines) cast ever-changing shadows on the wall was rather gorgeous. You imagine a child watching it as they went to sleep and being captivated. His latest thing is to acquire old-master-ish portraits and repaint the eyes with a squint or add a red nose. Hmmm. It was the sort of show where you think, 'Damn the art world -- why isn't this me?' But it isn't. 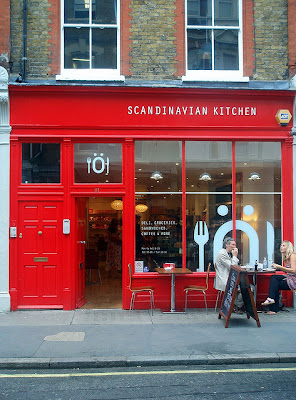 Absolute final port of call was the actual Scandinavian Kitchen that I had the mail order stuff from before. This time I was able to buy fresh cheese as well as tons more crispbreads and some more sweeties (I am LOVING Skum Banan, a mallow & chocolate banana not done any favours by its name). Why can't I live next door to this place? I also got the proper scandinavian cocoa powder to make the addictive-sounding cake on their website at the moment -- Kladdkaka...

Oooh that sound such an interesting day. Thanks for drawing our attention to some new names.

Hi Jane
Looks like you had a good day visiting 5 galleries! That must have been inspiring.
I've dedicated a post on my blog to you! http://ellenturningpages.blogspot.com/2012/04/what-jane-housham-gave-away.html

You don't live next door to the Scandinavian Kitchen because you don't want to put on two stones.... still you'd walk it off traipsing all over London. What a fantastic day out. My idea of heaven. I have a bit of a love/hate thing with Ron Mueck. I fall into that camp that admires his skill but find the figures quite creepy. A few ideas here for me to follow up but what I love most is your eavesdropping on other people. Your first example is the perfect way to remember that what you see is not always what you get. A great post!

I love how you write re your visits to exhibitions......... the rotating disc piece sounds amazing. A huge amount of thought has obviously gone into it.

Five exhibitions must have been totally exhausting!

Sounds like another amazing day. Makes me want to go to London more.

When I first saw Ron Mueck's 'Couple' I was amazed and touched by the reality and ordinariness of his figures. I like the woman carry sticks in the same way. However, some of the extra large pieces do seem a bit grotesque, rather than real.

Just remembered that the figures on a rotating disc (a gramophone record), throwing shadows, was a ploy used by Fred Astaire & Ginger Rogers to fool somone into thinking they were dancing in room(I think it was in 'The Gay Divorce')! The things my mind retains....

Rather belated comment - what a fascinating day out, and eloquently described. I saw Hans Peter Feldmann's work at Arnolfini in Bristol a while ago (at least pretty sure it was same) and had a sort of 'yes, but...' reaction. Fun to look at but not much more. Had to restrain kids from interfering with revolving stuff.

How was your kladdkaka? Bye for now, Scandi Kitchen x

fun to hear that you go to London to buy some Scandinavian ingredients! Yes - kladdkaka is a Swedish very classic cake.