Away Down to Lamorna 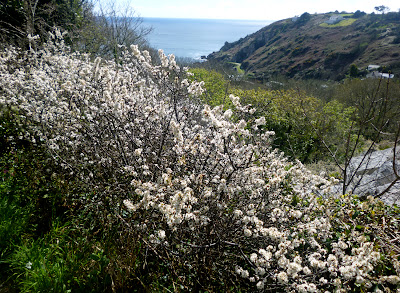 Last week we were lucky enough to stay in a rented house down by the sea at Lamorna Cove in Cornwall. The hedges were full of blossom and the broom was out, splashing everywhere with bright yellow. Above is the view from the path above the house. 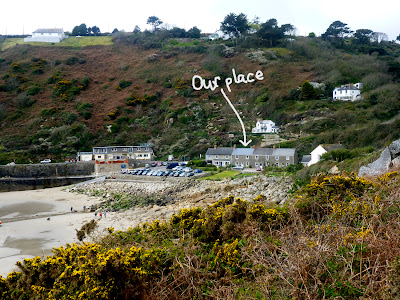 We were right down in the cove at the end of the wooded valley where quite a lot of artists have lived or stayed in the past. At the Village Hall the artists' group started by Samuel John 'Lamorna' Birch was still going strong and having a show which included work by Lamorna Birch's grandson and his wife -- they still live in the same house that Lamorna Birch owned, which I think is the white house towards the top right of my photo above. I talked to the lady looking after the exhibition and she lives and works in the 1920s studio built for Laura Knight by Alfred Munnings. I spotted it from the road later and it looked beautiful. I was so envious! Apparently a film crew had just finished filming Summer in February which is a novel based on the arty goings-on in Lamorna Cove in the 1920s -- I've just ordered the book. It sounds wonderful and I'm looking forward to the film as well (out in September)
Alfred Munnings' own house has been converted into a very lovely upmarket (but friendly) hotel called The Cove now. We ate at the restaurant there one evening and were so taken with it that we went back another night. These are the gorgeous drinks we had before we ate: 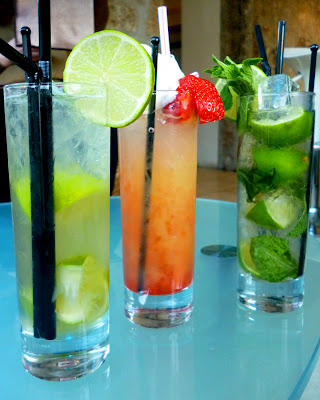 Mine was the capairinha with all the limes. Hooked on those now. The middle one was alcohol-free for Dora with sorbet and strawberries...
We had the writer A.N. Wilson as a neighbour for a week which was interesting but we all kept ourselves strictly to ourselves -- no 'Tamara Drewe'-ish vibes! I can't help but think of Posy Simmonds when I go down to Cornwall.

We had a pretty free-form week, dotting about here and there. St Ives  was not the same as I remember it from Christmases there with my Mum when it was wonderfully quiet and mild -- this time it was crazily busy but we went to the Tate to see the exhibition by Simon Fujiwara who, his Japanese heritage notwithstanding, grew up in Carbis Bay, just along from St Ives. It was a very strange assortment of installations based on fictionalised aspects of the artist's life. The room I liked best was where he had created huge models of lighthouses taken from paintings by Alfred Wallis. These reminded me strongly of the lighthouse that appears at the end of Marianne Dreams, one of my absolute favourite childhood books. 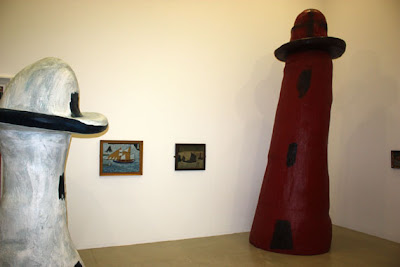 We had some beautiful walks, which almost killed me, so unfit am I (in spite of continuing to run round and round downstairs nearly every morning...). Some were along the coastal path and some ventured inland. This painting by Lamorna Birch really captures the sun and the fresh air of these walks: 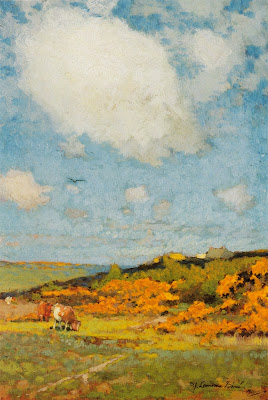 We even came face to face with a real cow when we had to cross a farmyard: 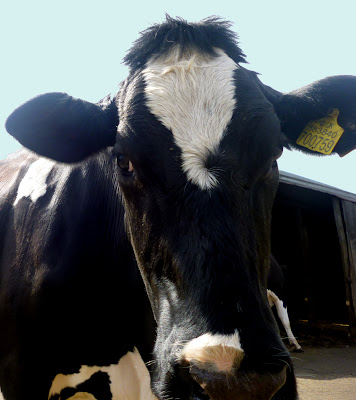 Of course I fancied myself in a pair of 'artist's trousers' painting en plein air, like this chap...
... but I only got as far as drawing a few shoes one rainy morning.
We went to view an art sale in Penzance, thinking that if there was a picture we really loved we might go to the auction and see if we could get it -- we used to be keen on auctions before we had kids. It was a big sale with about 500 paintings, some of them by well-known artists such as Wilhelmina Barns-Graham and Terry Frost, but they all looked a tiny bit shabby and insignificant, hanging cheek by jowl in the auction room. It was very interesting to view the pictures in that non-museum context -- you could handle most of them and really scrutinise them. The estimate prices were quite high and the only one I felt any feeling for was this one by Wilhelmina Barns-Graham: 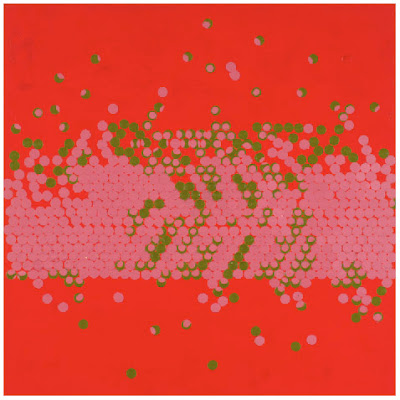 But the estimate was £2-3K and that was out of my price range!
We went to Mousehole one day -- absolutely lovely, much closer to how I remember St Ives being. And to Cape Cornwall which, in a similar way, was how Land's End should really be, but it's just a bit further up the coast. That was beautiful too. We saw General de Gaulle having a float in the sea there:

Penzance is nice, with some mad second-hand emporia, and a very nice place to have breakfast: the Artist Residence (also a hotel -- looked very cool). It was a very lovely coincidence that while we were there I was reading Patrick Gale's novel, Notes from an Exhibition which is set in Penzance and is the story of a woman artist and her family. I can't recommend this novel highly enough for anyone who loves art and/or Cornwall. It was the best holiday read I could imagine and even includes the author's personal tour of Penzance in the back.
Well, I think that's about it. I'll just finish off with a few stray photos.

Looks like a fabulous week Jane. I love all the insights to what you were doing, especially the auction and the whole art history connection. I read Notes from an Exhibition last year and enjoyed it too. Cornwall is a place it's easy to get romantic about but the last time I was there was for a week in Mousehole when the heavens erupted day after day. They often say Pembrokeshire is like Cornwall but without the people. Of course that's quite wrong but I can dream.

Looks wonderful! I always love your descriptions of your travels - you delve beneath the surface and find such interesting things.
And De Gaulle made me laugh!

Love Lamorna cove. I used to come here almost every year as a child. Great memories.