Having an increasingly rubbish memory is quite nice in one respect: I forget what I've ordered on Amazon and so on, so that when a package arrives it's usually a nice surprise. That's why when a parcel arrived for me at the end of last week, I was only slightly bemused. Usually I remember at the first peek inside the jiffy, 'Oh yes, I did order How To Boil Cheese' or whatever, but in this case I got right down to the bubble wrap before I realised that this wasn't a treat of my own conjuring.
No, wonderfully, it was a present from Chrissie, of the Postman's Knock postcard project, of two lovely old picture books about Sweden. They're both from the Fifties and are incredibly evocative. One of them is dedicated to Mr Robinson 'from Swedish boot and shoe operatives' and they have signed their names below the dedication, along with their Swedish home towns. They must have been on a trade visit to Britain back in 1956.
I'm just so touched by Chrissie's kindness. She sent a great letter with the books about her time as a nanny/au pair in Stockholm just after she left school. I won't forget the image she painted of herself in her floor-length red PVC raincoat and black boots -- fantastic. Like me, she loved the city and soaked up as much of it as she could, leaving her with a lifelong affection for the place. I think we both feel very drawn to Sweden and it has 'clicked' with us in a way that other places, although fantastic, just don't necessarily. When I left school I spent a year in Paris as an au pair and, like Chrissie, explored every corner of the city. I was going to study French at University on my return, so the whole experience stood me in very good stead, but I don't have the passion for Paris and France that I now have for Stockholm and Sweden. Similarly, I've been to New York twice (years ago, for work), but didn't catch the NYC bug (except in vintage postcard form). 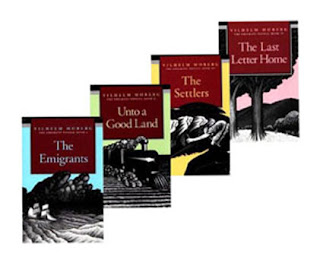 I've been feeding my Sweden bug by reading the four-part Emigrants saga by Vilhelm Moberg, about Swedish farming folk who emigrate to America in 1850 -- it's absolutely brilliant and compelling. I've got the third one to start now, not in the smart edition shown above, but in a great kitsch cover from the Seventies: 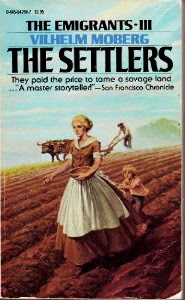 And, this week, still more Sweden came through the letterbox as I had managed to track down the film version of books 1 and 2, which was made in Swedish in 1971 (starring Max von Sydow and Liv Ullmann) and then re-edited and dubbed into English for the American market. It is only available on VHS and is really rare. When I unpacked the video, I discovered it was infested with bugs and larvae! I didn't stop to see if they were alive or dead but ran to the loo to brush them off and flush them away. I've also bought the sequel, The New Land, from the same seller, so I will be full of trepidation when that one arrives. I imagine these videos have been stored in a garage for forty years or something, hence the miniature hitchhikers.
I haven't watched the film through yet, but couldn't resist watching the first few minutes, partly just to see if it played. It plays! It's so beautiful, like being transported back to old Sweden in the same way I was by Skansen.

Oh, what a lovely surprise. Enjoy!! I know what you mean about forgetting what you've ordered.

Jane
I love that strap line - 'they paid the price to tame that savage land!' I have never heard of these books but will you wait to watch the film until after you've read the corresponding book? I think I'd have to save them as a treat and get both copies and watch them back to back in a whole day. Chrissie sent me a lovely book once too.She is so thoughtful. Sounds like they've gone to the perfect home.

What a wonderful surprise and such a thoughtful gift.

me too. sweden is definitely one of my places, loved it. and central and south america too. some places you're just drawn to aren't you. maybe we were swedish in another life!
thanks for popping over to my blog. sounds like there's a reason you drifted away from your best friend in the first place!

What great things to receive in the post. Laughed at the bit about Chrissie and PVC! :O))))

Hej!
Hope the next tape doesn't come with resident wildlife.... By the way, that coat was a nightmare - it was very heavy-duty pvc and creaked all the time!