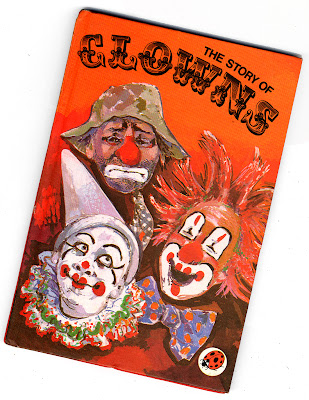 I'm amazed to have received another present through the post. Lesley, another Postman's Knock friend, sent me this wonderful Seventies Ladybird book on clowns. It's a great book that I've not come across before and I'm very touched by Lesley's kind thought -- thank you. 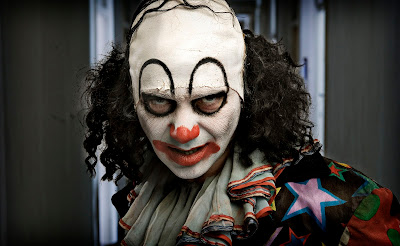 Well, I took my new book to work and showed it to my friend that I work with. I know she suffers from 'coulrophobia' or fear of clowns. I'm afraid I find this quite amusing -- as long as there isn't a real scary clown coming through the door of our office (like Mr Jelly, the Psychoville clown, above), I think she can cope. She looked through the book and announced it to be 'wrongy wrong wrong'. Whereupon, I looked up 'fear of clowns' online and found a wealth of weirdness. 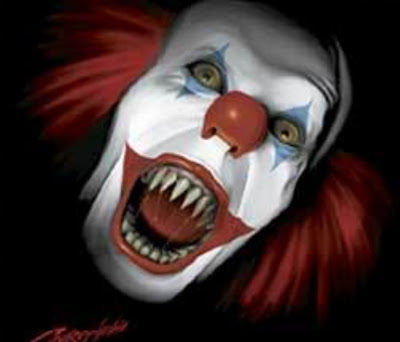 Children were consulted about the redecorating of a children's hospital in Sheffield -- clowns were the theme, but the kids rejected them out of hand and psychologists, following up with research, announced that children are frightened by clowns because they are similar to normal people but at the same time disturbingly different. This brought me to the concept of the 'uncanny valley', which conjured up wonderful images of a creepy location, a listless stream overshadowed by grotesque rock formations or some such, but in fact refers to a phenomenon in robotics: when human replicas look and act almost, but not perfectly, like actual human beings, it causes a response of revulsion among human observers. The 'valley' is a marked dip in a graph of the positivity of human reaction as a function of a robot's human likeness. A strange concept, but you can see how it applies to clowns. 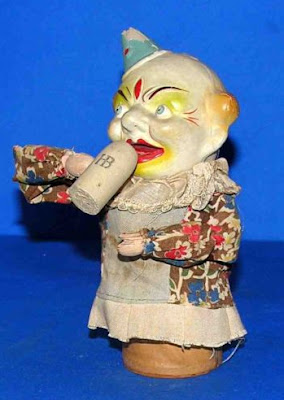 On eBay I found this nasty-looking fellow for sale -- for £144! I'd love him, but that price is out of my league. 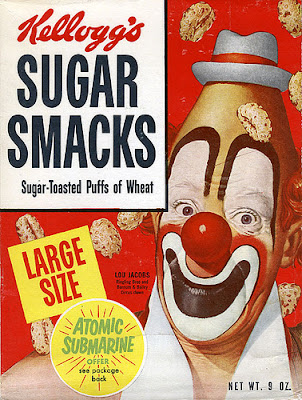 I do find clowns disturbing but it's that that makes me like them and want to gather images of them around me. The creepy combination of merriment and hostility is a winner every time.
Just to bring things back within the realms of sanity, I also found these ... lovely cushions: 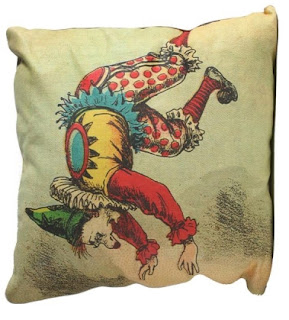 One of a series of eight from here. There, nothing scary about that, is there?
Posted by Jane Housham at 17:47

I just knew that book was heading in the right direction!

Great post, and great gift of that book from Lesley. I am sat here trying to work out just how the people who designed the Kelloggs packet managed to make their clown less scary looking.............. Somehow he doesn't have the weirdness of the others.

I must admit, I find clowns unpleasant. I'm not really scared of them, although they certainly can be disturbing.

I think it's something to do with the forced jollity of their appearance contrasting with their unfailing lack of real humour. I remember the huge feeling of disappointment as a child on a wet bank holiday, when you discovered the only thing on TV was Charlie Caroli in his god-awful big top!

Yes, it's the idea that you know those clowns are quite likely to be disgruntled, disaffected middle-aged blokes which is there all the time, under their make-up and in spite of the pratfalls. The same with hired Santas.

What a lovely surprise for you! I'm afraid I find clowns with painted faces too spooky for comfort....

OMG I have the very same book ! I did a project at college about clowns & to this day I have no idea why !