While the cats were away...

While the boys were away at the Edinburgh Festival, my daughter and I had a 'relaxed' regime at home. We moved the furniture around and ate on the sofa (ooh-err!). We established a flower-making factory and stuck our flowers all along the top of the window (click the strip above). 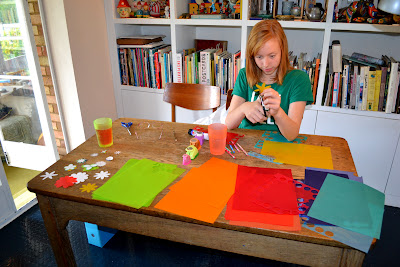 Then as soon as husband and son returned, we in turn escaped on a little tour of nice places plus an awful lot of shopping opportunities. Who knew there were SO MANY branches of Jack Wills?
First stop was Bicester Village, rather grim in the rain, but I discovered a shop that actually seemed different from all the rest and made me feel excited (especially if I could half my age and weight, but hey ho): 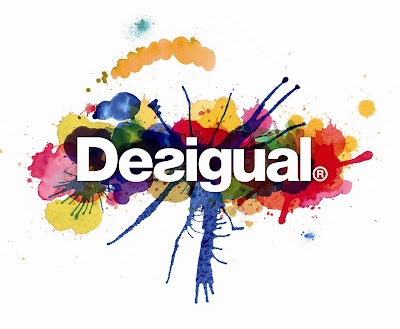 Now I've just found out that Desigual is the shop that celebrates new branches opening by giving free outfits to the first 100 people who turn up in their underwear. Sadly I don't think this could ever be an option for me. 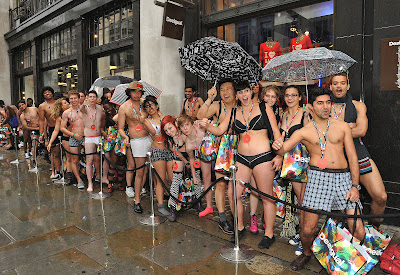 Still, moving right along, it was Stratford-on-Avon next, taking in Anne Hathaway's cottage: 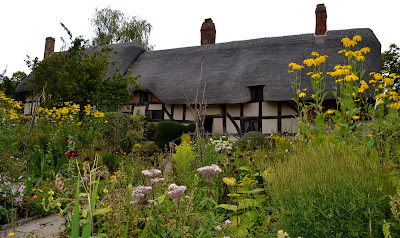 In the evening we went to see a performance of A Midsummer Night's Dream in the newly refurbished Swan Theatre.
The theatre was so beautiful with every detail seeming to have been carefully considered -- the green marble staircase, the inlaid doors, the mosaic fountain. There was a great exhibition of contemporary prints inspired by Shakespeare. The play was fantastic too and very accessible, even for younger members of the audience. The Athenian court was interpreted as a kind of Sopranos-esque gangster culture, the fairies were a bit goth-punk, and the rude mechanicals were handymen, which sounds like a crazy clash but it all worked really well. It made me wish I went to the theatre more often as I hardly ever even think of going. 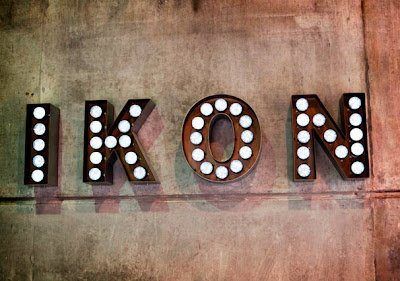 On, the next day, to Birmingham, where we went to the Ikon Gallery first, before the shopping temptations could overwhelm us. The new show at the gallery was by Atsuko Tanaka, a Japanese artist who died in 2005 and who was an important figure in Japanese avant-garde art (I hadn't heard of her before). I liked her big, colourful canvases of connected circles which made me think of telephone exchanges or the Bletchley Park Enigma machines. 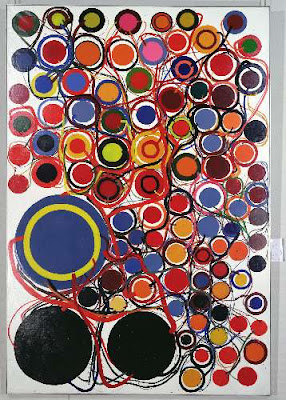 There was also her dress of lights: 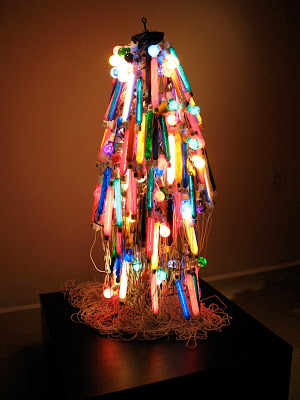 Here she is wearing it: 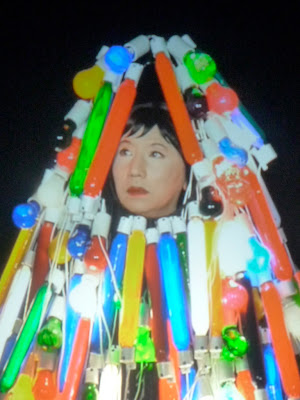 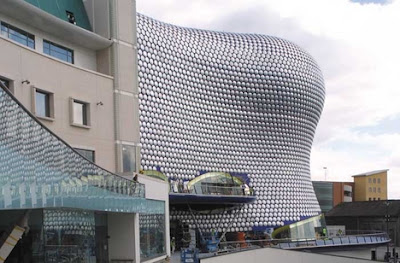 We liked the jelly-bean bull in Selfridges but noticed some naughty people had picked the beans off his bottom: 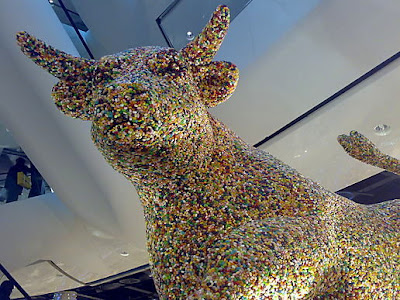 You could hardly tell that Birmingham city centre had been damaged by rioting so recently. It seemed like business as usual, which I guess is a good thing.
The next day we drove on to Great Malvern which I've always loved. I like a place with slopes. We discovered the smallest theatre in the world where performances are given on demand (no booking necessary).
It didn't open until 2pm otherwise I'd have been tempted to request a 'performance' -- who knows what that might have consisted of? But as it was we had to keep moving, to Hay-on-Wye. 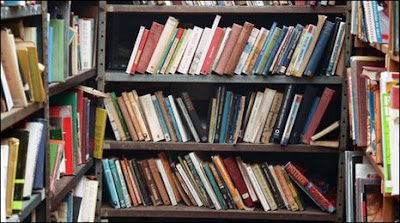 I love Hay, but I'm not too keen on the literary festival as I'm not a big fan of author events -- the book's the thing for me. I can't resist the endless piles of ripening books, and when I'm there my head tends to be permanently tipped to one side in spine-reading mode. We made a stop at the Children's Bookshop just outside Hay as well.
It was chucking it down the whole time we were there, which was a bit hard to bear. Hay has gone much more upmarket since I was last there and is starting to resemble many other upmarket places (in terms of its shops), like Fowey, Whitstable, St Davids, etc. It seems a bit of a shame when the individuality of places is eroded by posh gift shops but at the same time I'm delighted if Hay can support all these shops and people can make a good living from them.
I was happy because I got some nice old books about Sweden. 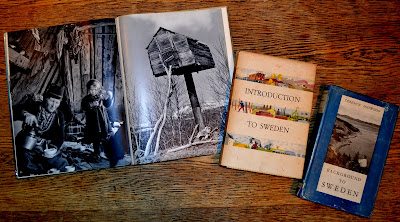 The next day we took in Cheltenham (lovely, specially the Montpellier district), then motored on to Bath. Bath is just unbelievably gorgeous. You don't know where to look next. I wanted to show Dora everything and try to give her a sense of the period when it was at the height of its popularity. We had cakes in the Pump Room after we had been round the Roman Baths -- these were fantastic too with the new (to me) presentation with projected images of Romans going about their business. 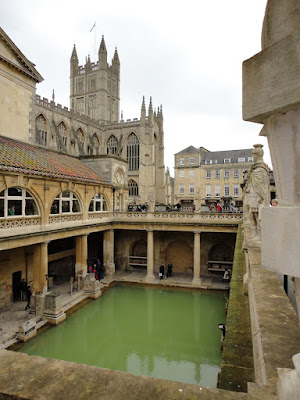 I hadn't really understood previously how recently the baths were excavated and I saw the whole thing in a much more layered way this time. I hadn't even realised that the 'Roman' statues around the top of the baths are in fact late Victorian. I was very taken, also, with the 'letters' written to the Goddess of the source, Sulis Minerva. These were messages scratched onto thin sheets of lead, folded up, and thrown into the water. They were mostly, it seemed, from aggrieved citizens who had been the victims of theft, naming the suspects and begging the goddess to wreak punishment on them. It was beyond me how anyone had managed to read the messages. 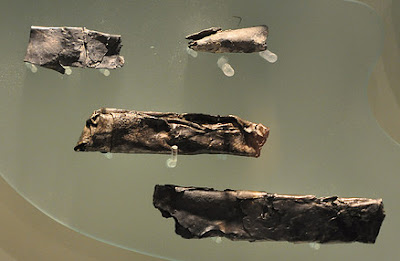 While we were in Bath we went to see 'A Museum for Myself' by Peter Blake at the Holburne Museum.
Really recommend this (on till Sept 4th).
Our foodie 'find' in Bath was Bistro La Barrique, which we thought was fantastic. We think that 'renowned TV chef Michel Lemoine' (the owner) was the gentleman standing on the doorstep who tried to lure us in. At that point we were not aware that we were in the presence of a celebrity and so I said, a little more tartly than I might have wished, 'I'll just have a look at the menu'. But we did decide to give it a go and the food was deeee-licious. It is run on a 'French tapas' system, so the dishes are small and you can order quite a few. As it was STILL chucking it down, we kept on ordering a little bit more and eating ever more slowly in the hope that it would stop. It didn't, but we had a great meal anyway.
All too soon, it was the M4 for us, complete with accident. But we had a brilliant time and quite took to the nomadic lifestyle. 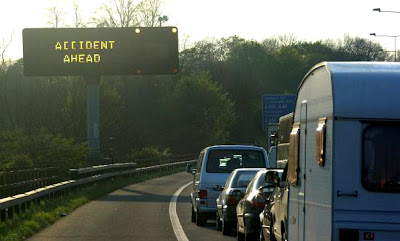 What a whistle stop tour Jane. It all sounds great and I'm glad you got to see Peter Blake as well as Hay. I know what you mean about the 'trendy' shops there but at least they don't overwhelm the book shops and I think that's the primary reaosn for most visits still.Books on Sweden eh? Sounds like you're planning an itinerary for a return trip!

Wow, you did get around! And so close! You should have popped in for a cuppa!

Ooh, now I want to go and see the Peter Blake exhibition. I'd forgotten about it, not having been fit enough to go and see it, but perhaps I'll manage it this week, before it closes.

Gosh, Jane, so many of my favourite places! Hope Malvern was looking its best for you - weather's been a bit strange lately so hope you didn't come during one of those heavy showers. Know what you mean about Hay though.

What a coincidence that we would both have been in Bath at the same time! I can't believe I missed the Peter Blake exhibition, I love his artwork. I'm sitting here kicking myself, ouch! You and your daughter did get around didn't you?!

The Baths were fantastic weren't they? I really liked how it was presented, including those moving projected images - they blew me away. It was just like you were there with the real people.

I DO love Cheltenham and Bath, there is something so genteel about spa towns. The pair of you have had such a cultural few days, it all sounds wonderful.

What a fabulous trip - it made me wish I could have come with you! (But not the queue on the M4 though)