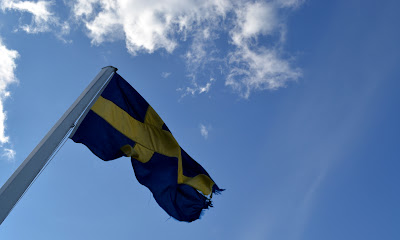 'Sweden at last' both because I'd been dying to go for so long, and because it's taken me a whole week to get this post together. It's going to be a long one, I'm afraid -- a splurge of photos and impressions. 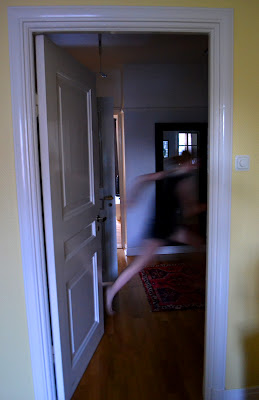 We rented an apartment in Vasastan, just to the north of the city centre, with Cocoon Sweden, who were a very friendly company. When we got to the flat we were amazed to find that it was huge, with two front doors (it was two flats knocked into one) and room to run and turn cartwheels just in the hall! Much bigger than we're used to or were expecting. It seemed to have endless doors and mirrors so that I kept turning the wrong way all week. It was a treat in itself, before we even started to explore the city. 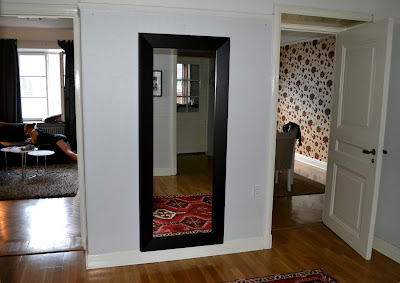 As soon as we'd arrived, we just set off and walked south until we got to Gamla Stan, the oldest part of Stockholm. It was very quaint -- I hadn't bargained for it being quite so developed for tourists. It was thronging, but we found a nice square by the Nobel Museum and sat outside a bar having the first ice-cold beer of the holiday. Then a fantastic military band arrived right in front of us and gave a really marvellous concert. 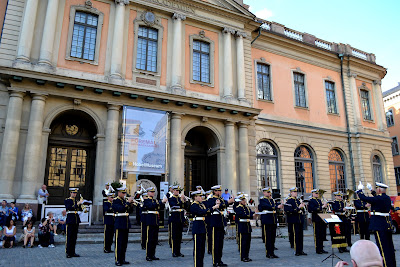 It was getting quite late so we got the underground (the lovely tunnelbana) home, passing Riddarsholmskyrkan on the way to the station: 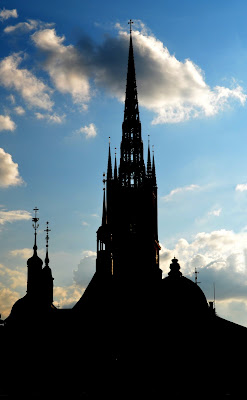 The next day we set off again. The city was a delight to wander around in, completely safe and really easy to navigate. We got Stockholm Cards which gave us prepaid travel on buses, trains, trams, tubes (through the whole of Stockholm county, not just the city) plus entry to 75 museums. Those cards were pure gold. 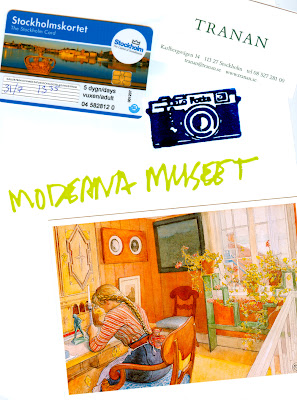 We went to the National Museum and I went in the 'Lust and Vice' exhibition, which explored the relationship between art and sex through the ages. I liked the poster: 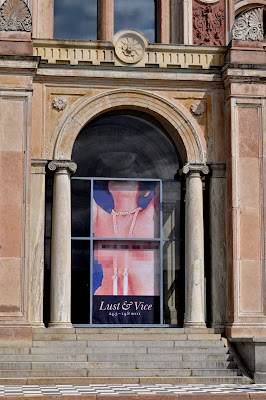 I went to the exhibiton Seduced: Art and Sex from Antiquity to Now at the Barbican back in 2008, so it was interesting to compare the English and Swedish approaches to the same subject. There was quite a lot of crossover (cheeky snuffboxes, boundary-pushing boudoir prints, saucy Bible stories -- poor old Susanna leched over by endless Elders) but I think the Swedish version was slightly more explicit, on balance. I'm recovering. 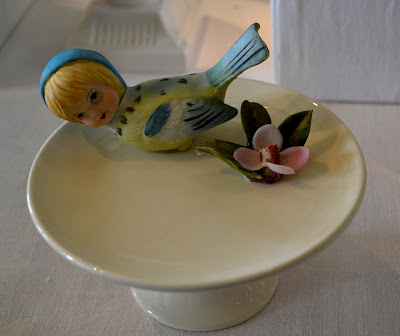 Elsewhere in the museum, I liked these freaky animal-human hybrids by British artist Barnaby Barford, who was inspired by Hieronymus Bosch, according to the notes. Very kitsch. 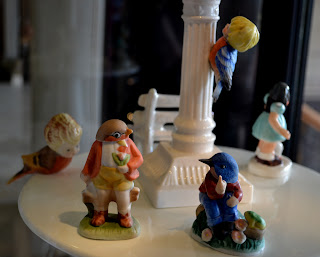 There were tons of fantastic Swedish-designed objects and furniture. I liked this tapestry -- didn't get many good photos of the other things I liked. This is just about half of it. 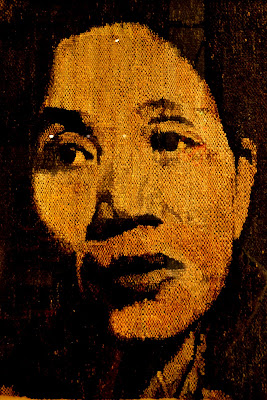 Then it was on to the Moderna Museet -- the Museum of Modern Art -- which was given over to photography in most of the rooms. Very good. It was David's birthday -- he always gets his birthday in some swanky foreign location, it seems -- so we went out for a special dinner to Tranan, a nice restaurant on Odenplan, the square near our flat. 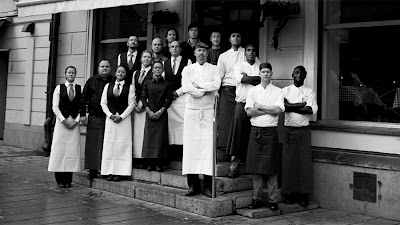 Well, I did try to use some of the Swedish phrases I'd so diligently learned -- "Hur mycket kostar det, tack?" -- but EVERYONE really did speak the most brilliant English, truly everyone. The place is virtually bi-lingual. 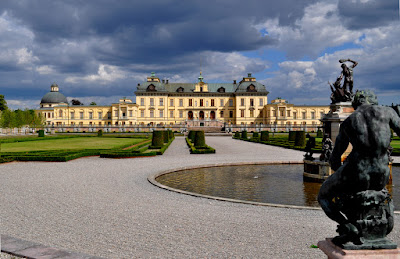 I'd better move it along a bit otherwise the blogpost will take as long as the holiday itself. On Monday we went by train and bus to Drottningholm Palace on Lake Malaren. A World Heritage site and very beautiful. The gardens were lovely too. 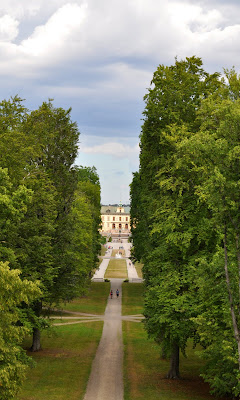 And the Chinese Pavilion in the grounds:

We caught a little, old-fashioned steamer and came home over the lake. 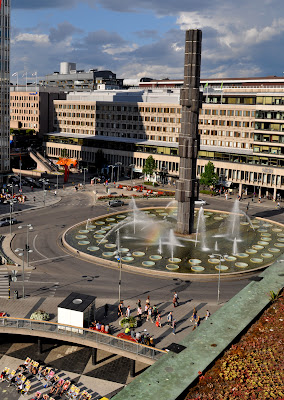 When we got back into Stockholm we went to the Kulturhuset, which is equivalent to the Pompidou Centre in Paris, I guess, and had drinks in the rooftop cafe with great views of Sergels Torg below, looking just like a 1960s postcard.
Tuesday was an all-day trip out through the islands of the archipelago to Svartsö, which we picked more or less at random on the basis of how long it would take to get there. The journey was just dreamy, floating past endless fantasy houses perched by the water. We also went past the statue 'God, our Father, on the rainbow' by Carl Milles -- incredibly modern for 1946 -- on Nacka Strand: 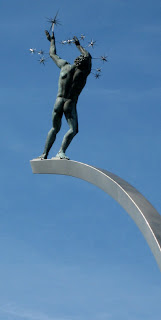 When we arrived, we discovered a beautiful island, with two lakes in the centre and, apparently, no cars, just bikes, scooters and superfast forklift trucks (or some strange cousin of the latter).

We walked through the trees to the nearest of the lakes. 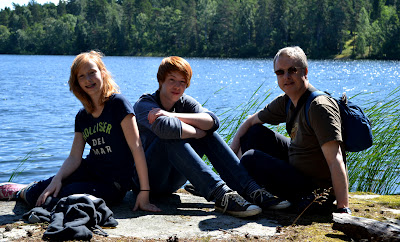 Then we wandered back to the only restaurant, which turned out to be terrific -- the Svartsö Krog. 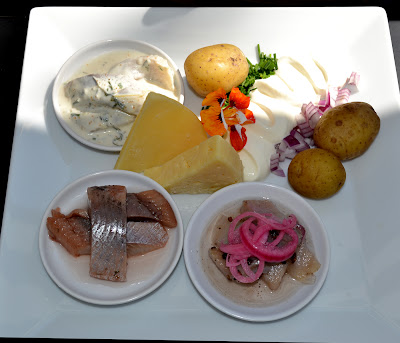 That's three types of pickled herring AND two sorts of cheese AND boiled potatoes -- and that's just a starter. We loved all the types of herring we tried through the week, even the kids. Dora ate the nasturtium for a dare.

I think I'll have to make this Part 1 or I'll be here all night. Tomorrow I will do Djurgarden, my favourite bit of Stockholm...