Back from our hols

We've had our summer holiday. It's over. In fact I've been back at work for a week. It was good to have a break, and we did lots of interesting things, but it didn't really match the idyll that I have in my mind when I think of summer holidays (no reading in boats, for a start). 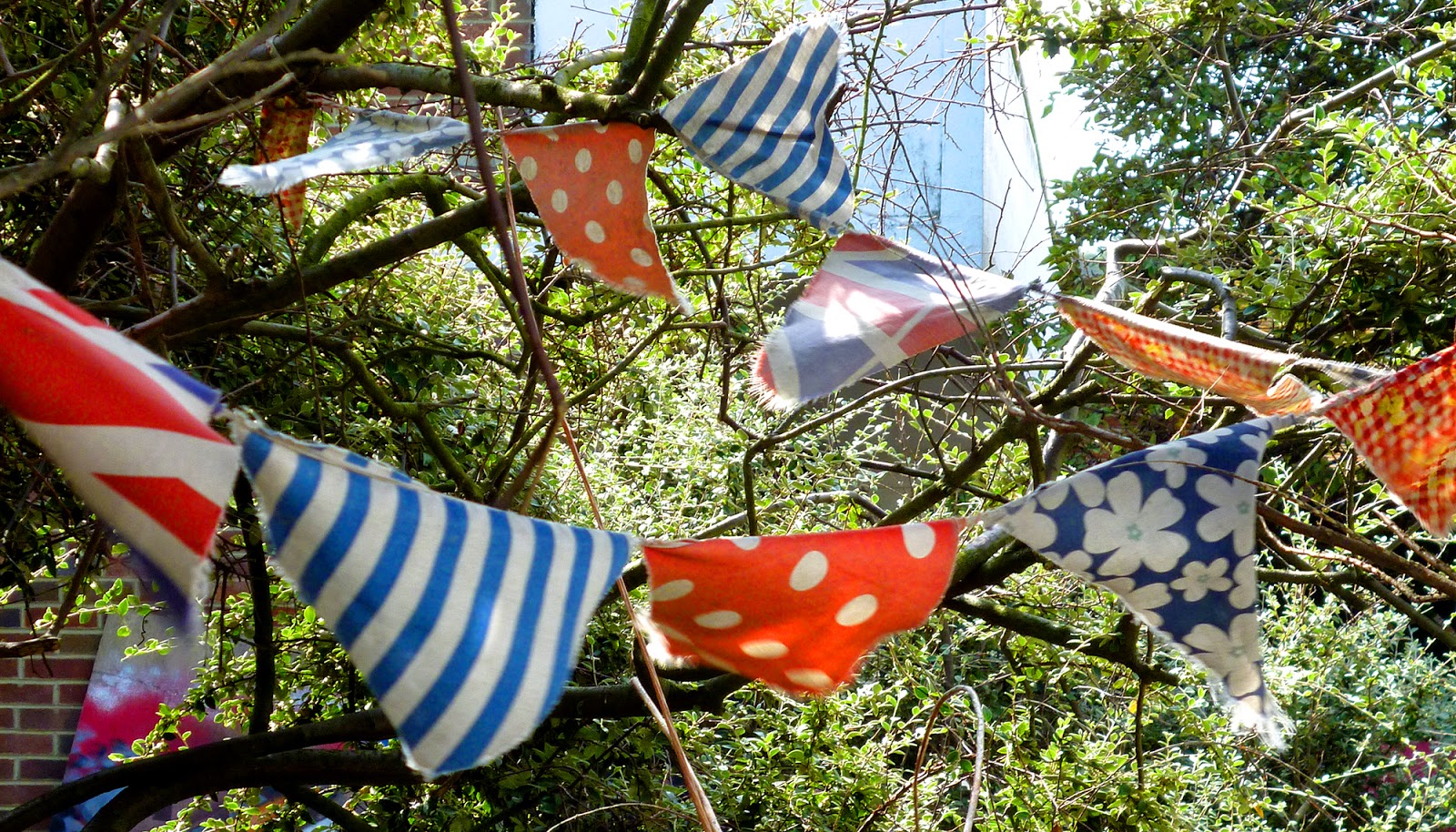 We went for a shabby-chic sort of English holiday, down in Kent. The faded bunting was out in force, the cupcakes, the vintage shops, the cafes with mismatched crockery and wobbly chairs -- all lovely, don't get me wrong, but it does sometimes feel that shabby chic is taking over the country, so that it will become as ubiquitous as the boring old style it was intended to shake up. We rented a house near Folkestone which was lovely in every respect apart from the fact that it was suffering from 'Keep Calm and Carry On' overkill -- every mug and cushion emblazoned with 'Keep Calm and Relax'; three identical canvases in the kitchen with slogans about the Queen and cream teas; driftwood hearts and so many rustic seagulls and fishes on stands that we had to hide a few of them away. The strings of miniature wooden flipflops on the landing were almost the last straw but we bore their febrile clatter with gritted teeth -- we kept calm and carried on.
Even though lightning lit up the house on more than one occasion and monsoon rain drew us to the back of the house to stand under the corrugated plastic roof and listen to the amazing noise it made, we managed to dodge the bad weather and never actually got rained on (apart from a very ill-advised five minutes on the beach in a storm discovering that none of our raincoats are actually waterproof).
I'm not going to do a blow-by-blow account of the holiday, you'll be relieved to hear: I think hearing in detail about other people's holidays is probably nearly as boring as hearing about their dreams (although I've been very guilty of the blow-by-blow holiday account myself, I know. I've learnt). I'll leaven the mix with plenty of photos.
We just had a nice time going to a different town each day and raking round. First we made a beeline for Paul and Karen Rennie's beautiful Seaside Modern shop in Folkestone's Creative Quarter. The last time (also the first time) I was here, it was the weekend of my 'Holiday with Martin Parr' courtesy of the School of Life and Martin Parr himself came in while I was enjoying a conversation with Paul Rennie. As he wanted to take Paul's photo, the conversation came to an abrupt halt, so I was pleased to find Paul in the shop again this time and to be able to introduce D as well (the kids lurked outside). I don't know whether Paul remembered me from the last time, perhaps with a sinking heart. He is a very charming man and D and I revere him to the point of fandom but he was in a somewhat dark mood, it seemed. My attempts to strike up suitably aesthetic topics of conversation kept turning black -- it might have helped if we had bought something from the shop but we are trying to divest ourselves of some of our accumulated stuff at the moment, not acquire more. I don't think it was us (at least I hope not) but rather the sombre days we're currently living through.
Our next beeline was to the Towner Gallery in Eastbourne to see the Peggy Angus exhibition. Before we went in we had lunch in the cafe and bumped into a friend from my book group with her family. It doesn't matter where we go on holiday, I always seem to bump into someone I know. I suspect the odds can't be as long as I think they are of this happening or it wouldn't happen so frequently -- but I love the feeling of weird coincidence.
I enjoyed the Peggy Angus. The photo of Peggy in her Camden Studio was almost my favourite thing -- the above magazine spread was the only copy of it I could find. The picture hanging on the wall in the photo was in the exhibition and somehow looked better in the photo than in the flesh. Angus wasn't an absolutely first-rate painter but she belongs in with Bawden and Ravilious and sits well alongside them. She really found her gift in her wallpaper, fabric and tile designs which are strong and rhythmic and very fresh. She was also an inspirational art teacher and did some very ambitious murals with her pupils. Her life was one of socialist leanings, shading into the slightly naive communist sympathising that so many idealistic young people shared early in the 20th century. From the photos of her in the show and the events that she was involved with, she seems to have been a genuine egalitarian and an instinctive feminist during a period when women didn't always manage to be treated as equal to men. I came away having added a new name to my list of loved early-20th-century artists. 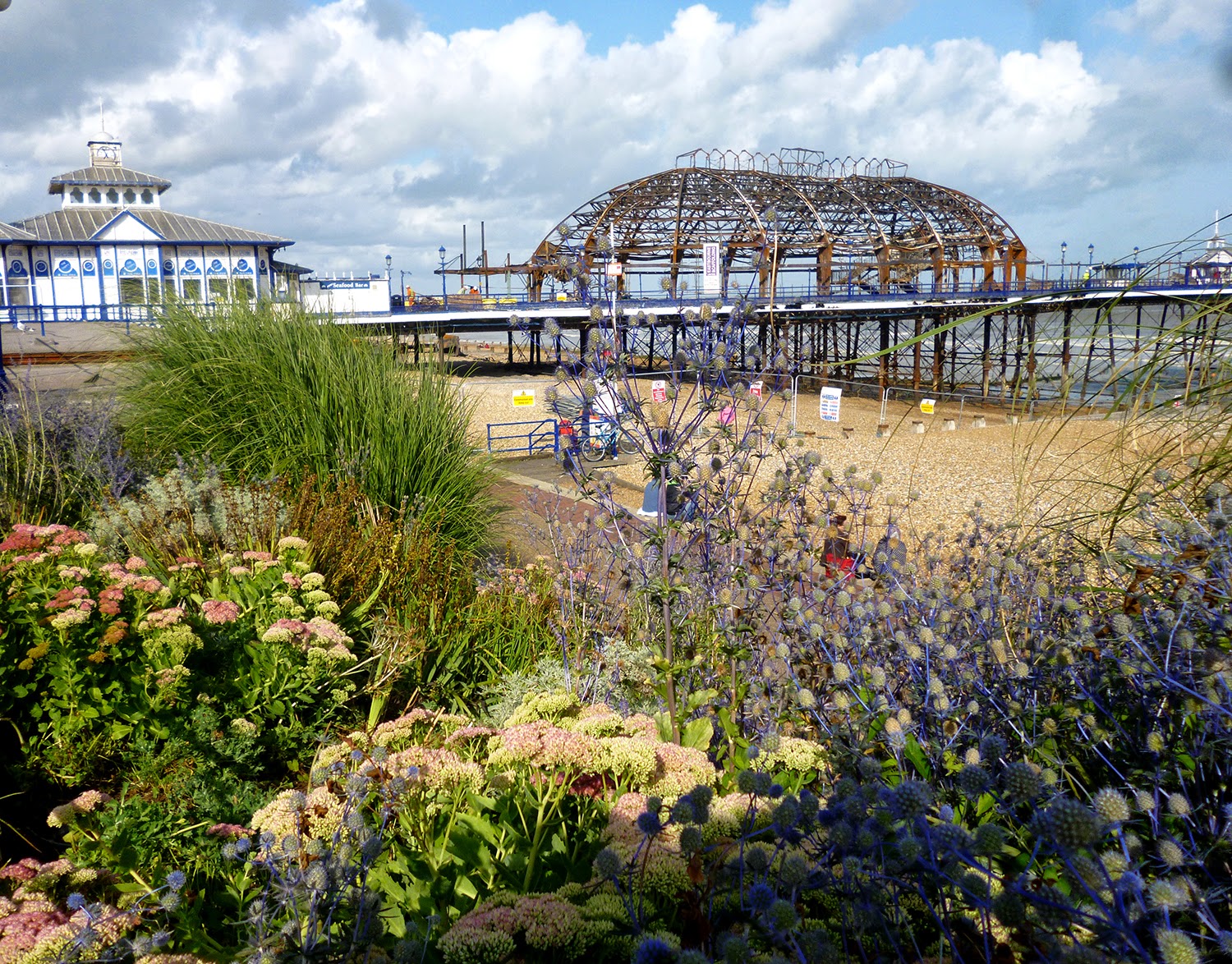 Also while we were in Eastbourne we stopped off to see the poor pier, ruined by fire. 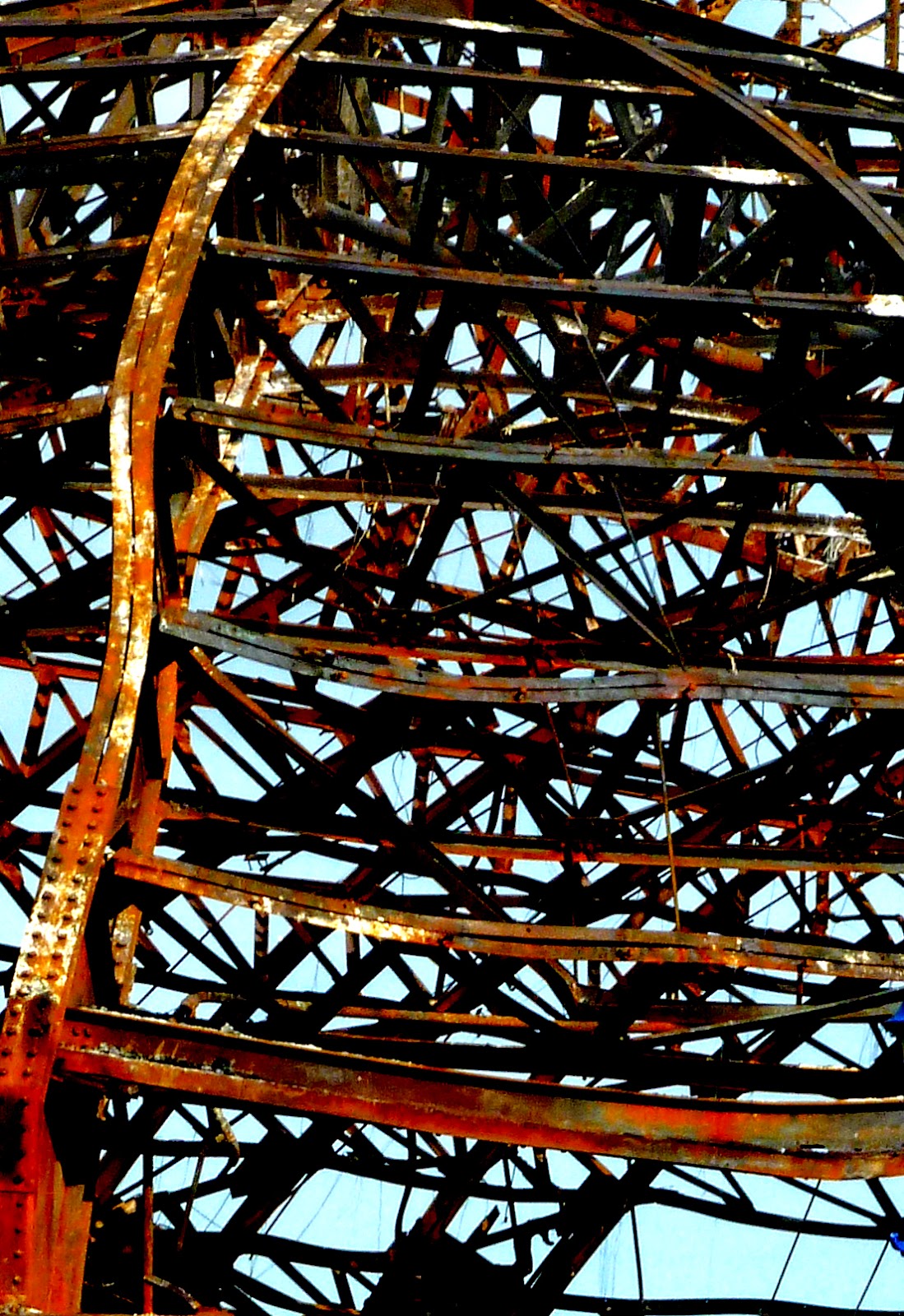 Hastings is almost my favourite of the south-coast towns. If you like vintage (and I do, I do, in spite of my outburst above), it has the best vintage shops, including the excellent and unusual Hendy's Home Stores (closed on the day we visited). 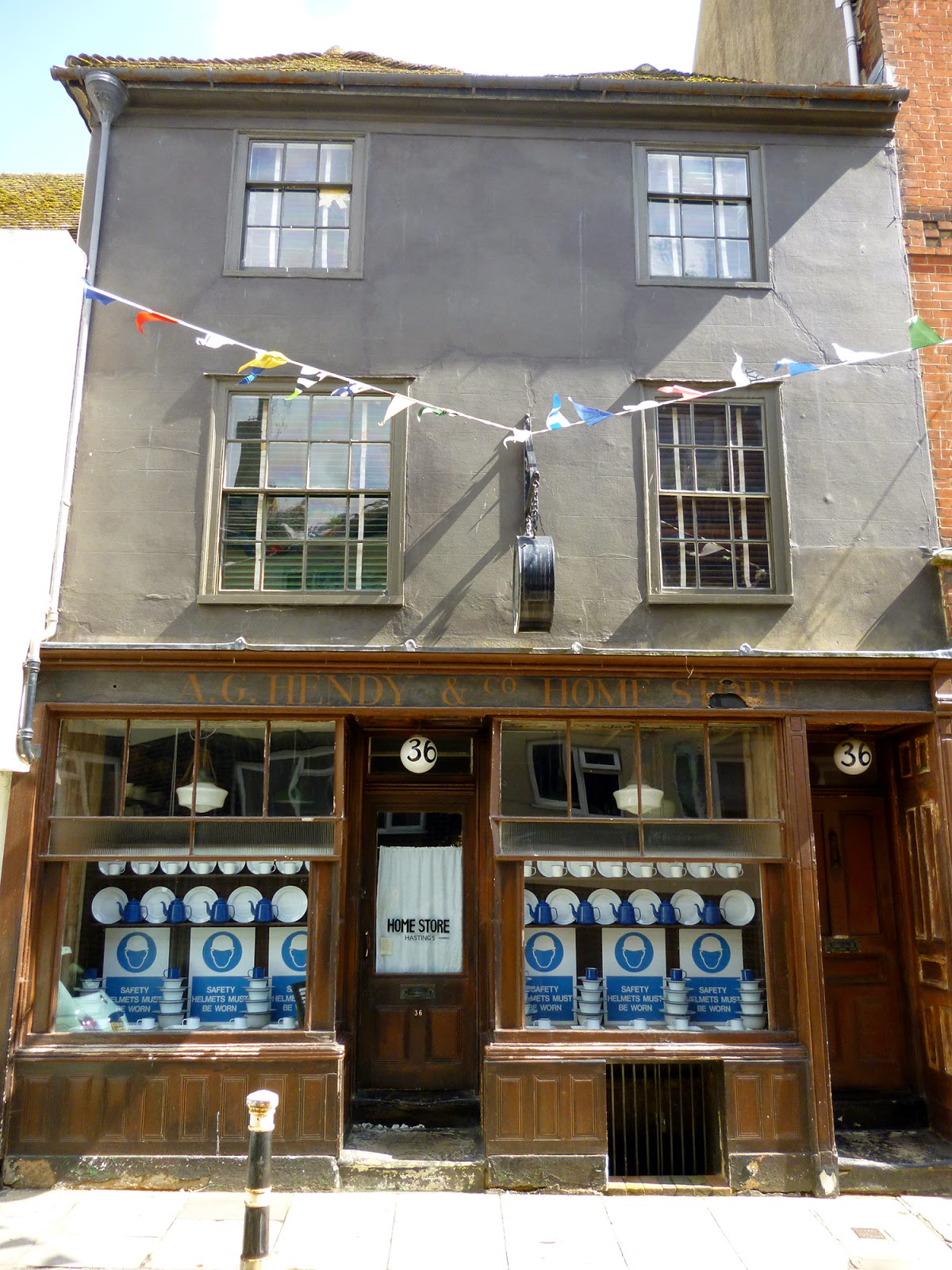 We went to a very strange cafe for lunch -- Fawlty Towers-esque in its struggle to serve a simple meal. I won't name names but the soup was off, the jacket potatoes were off, there were no rolls, no chicken ... the list of what was off was longer than what was on. I was going to have a tuna mayonnaise sandwich and clearly the mayonnaise was nearly off too as we saw our waitress sprinting out of the cafe and returning a couple of minutes later with a big jar of mayonnaise! As we were asked to pay without being given a bill or a receipt, I cooked up a whole fantasy scenario about the waitress and chef having opened up the place while the boss was away to try to make a bit of cash on the side, but without buying any supplies. Just my over-active imagination, though, I'm sure.
Best secondhand shop in Hastings was Robert's Rummage, complete with grumpy Robert spouting sexist stuff about his wife and women in general -- quite entertaining if you don't get offended by such things.
I really like the Jerwood Gallery in Hastings too. They have a good drawing exhibition on at the moment (until 15th October 2014). And I like the rattly little miniature train that goes by underneath the gallery windows and the views out to the blackened beach where the old boats are pulled up.
We discovered that Hythe was a good place with interesting military history and a canal that was designed to keep Napoleon out of England. Now it has water lilies growing on it. 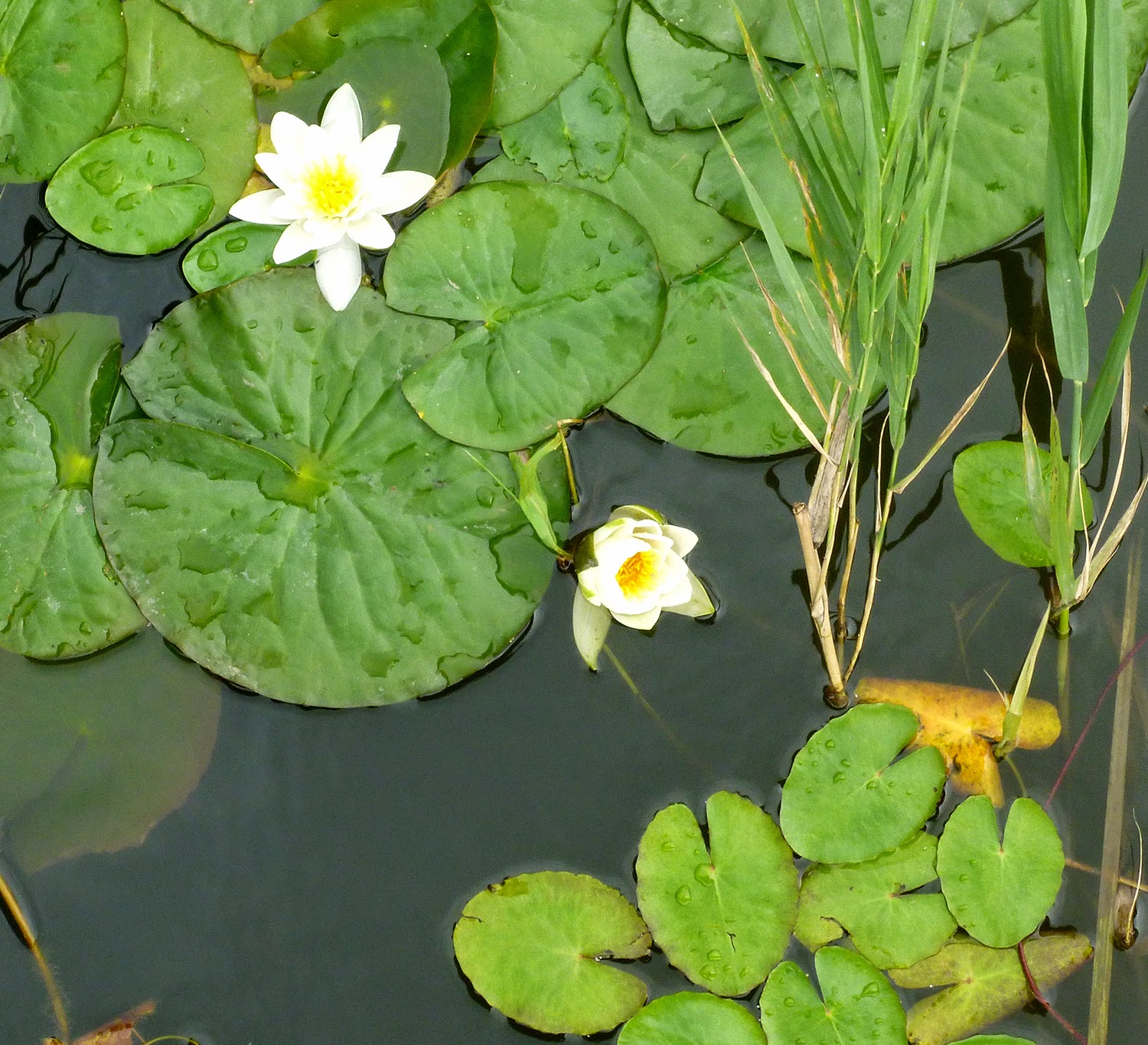 Hythe war memorial was particularly moving, with its low-relief sculptures: 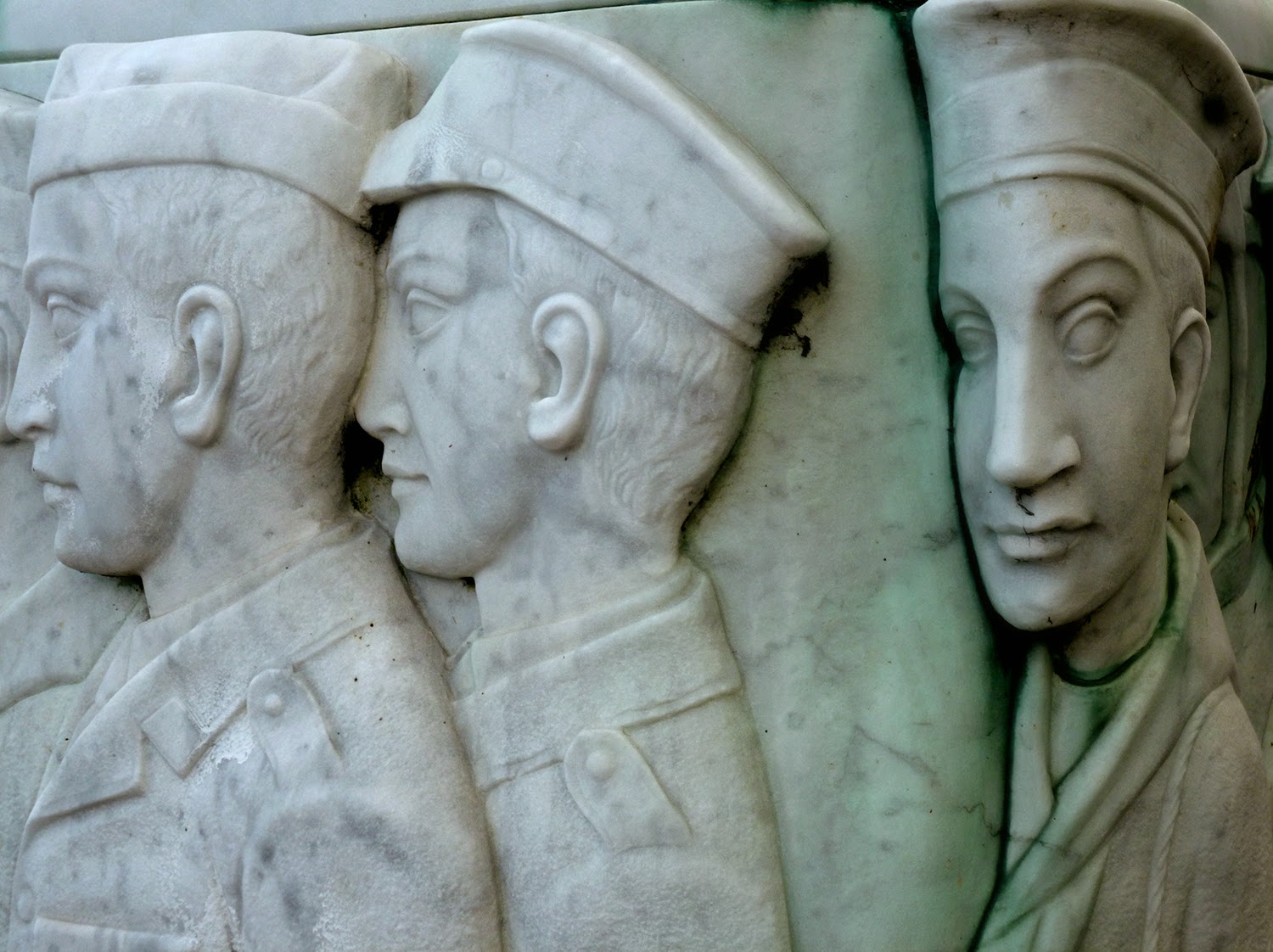 We walked along the canal to Sandgate (halfway to Folkestone). There was an interesting pop-up museum about H.G. Wells, who came to live in Sandgate for his health and had a house designed by Voysey built for him there. Lots of interesting writers came down to visit him, including George Gissing, after a character of whose we named our daughter.
A man having his ears looked at in Sandgate: 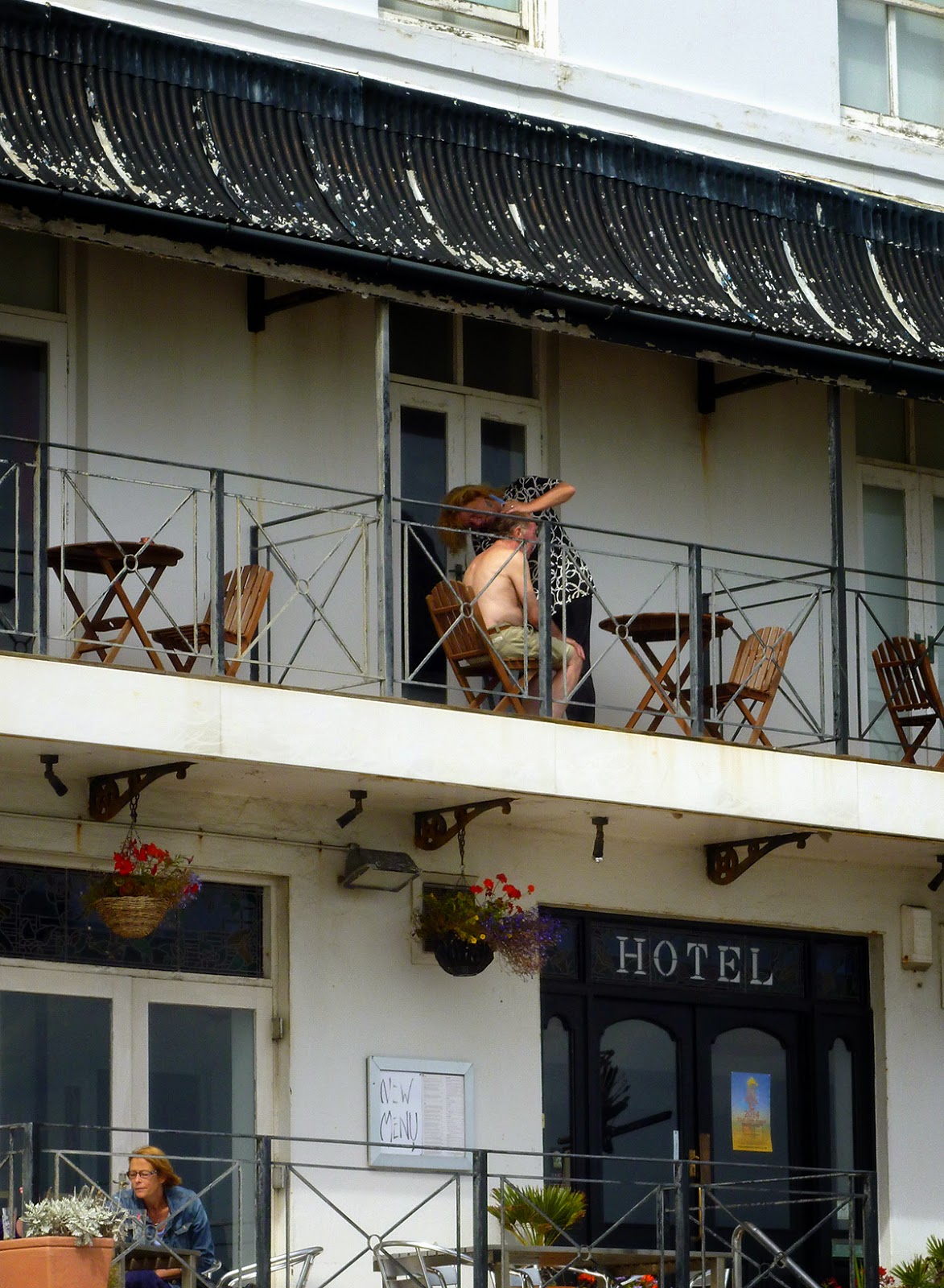 There was Rye, too. Rye is gorgeous but just a little too aware of that fact. It is so Mapp-and-Lucia-ed up it can barely breathe. Enough already! The place needs to let go a little. 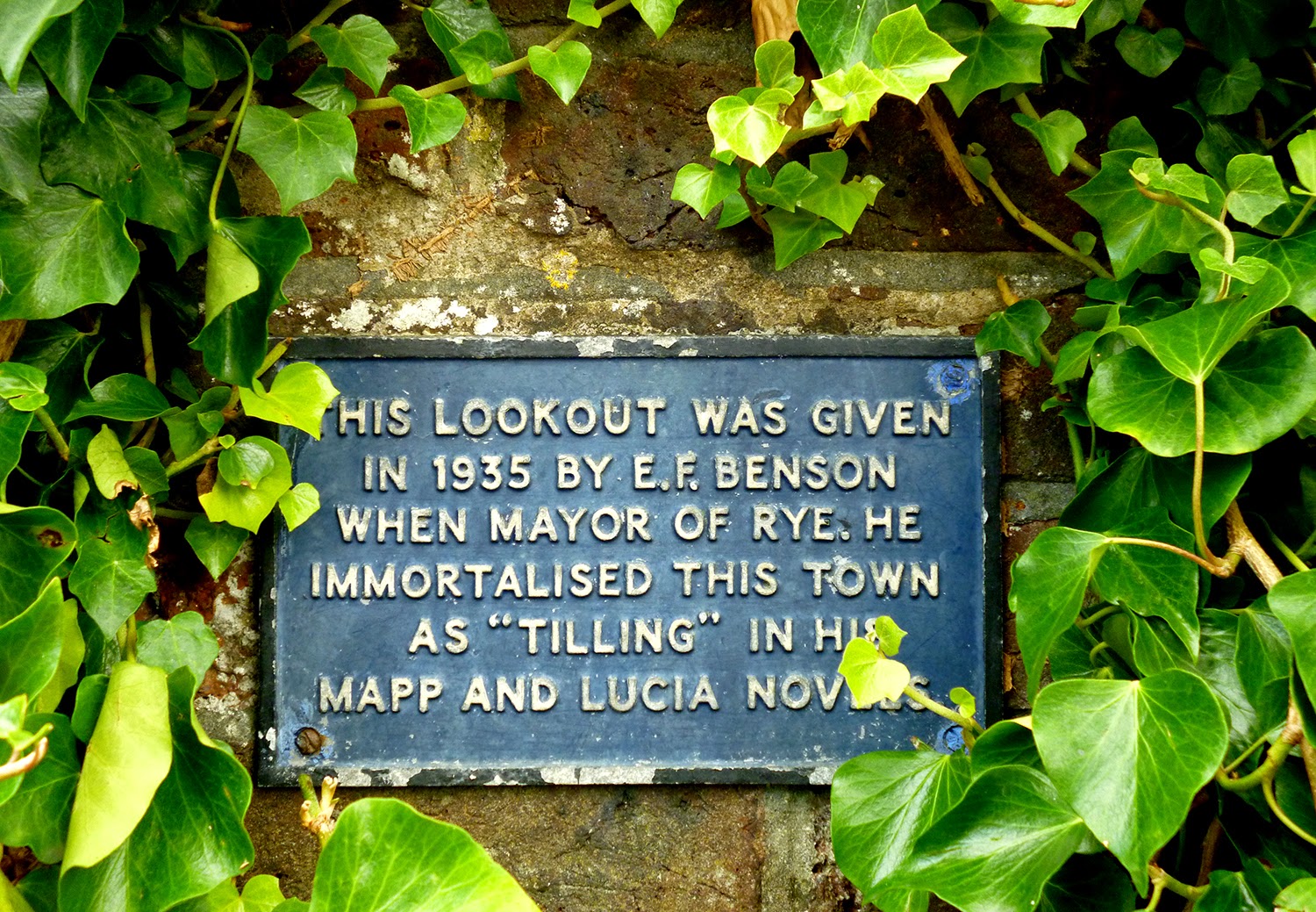 There was a great vinyl place in the centre of Rye, Grammar School Records. I could have spent all day in there. 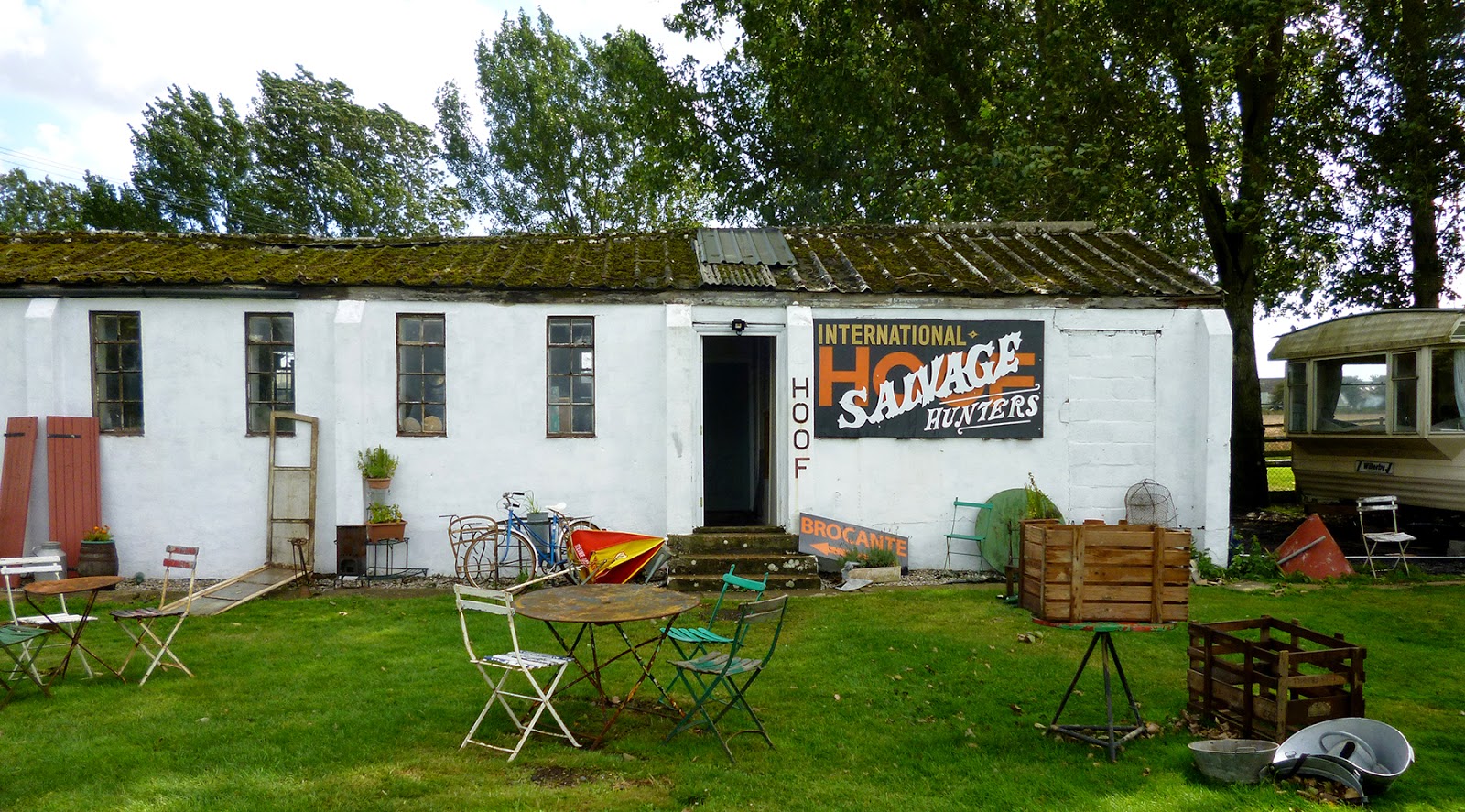 Nearly all our forays involved trundling along the A259 where, on a fairly sharp bend near Brookland you'll see a sign for 'brocante'. This is 'Hoof Salvage', a wonderfully strange place straight out of a Scandi-noir set but actually full of French secondhand stuff. Very nice owner who commutes between Kent and Central France. Mostly open towards the end of the week and weekends, I think.
We had a special meal out at Rocksalt in Folkestone and sat in the window right beside a huge bamboo structure that was being built for Folkestone Triennial, which is about to start. It's called the 'Electric Line' and is by Gabriel Lester. I have to say I don't like it at all -- I find it forbidding and over-busy, a cage for jungle prisoners. While we were eating our meal, some big naughty boys had climbed inside and were delighted to be watched by us. Later on they left, giving us the evil eye as they went past the restaurant -- it spooked me. The local paper doesn't seem sure about the sculpture either.
Well that's nearly all I have to tell, apart from the fact that we had one hour in Rochester on the way home and one hour was nowhere near enough to see all that was to be seen in a wonderful old town. I'll definitely have to go back, if only for Baggins Books, a vast secondhand bookshop. 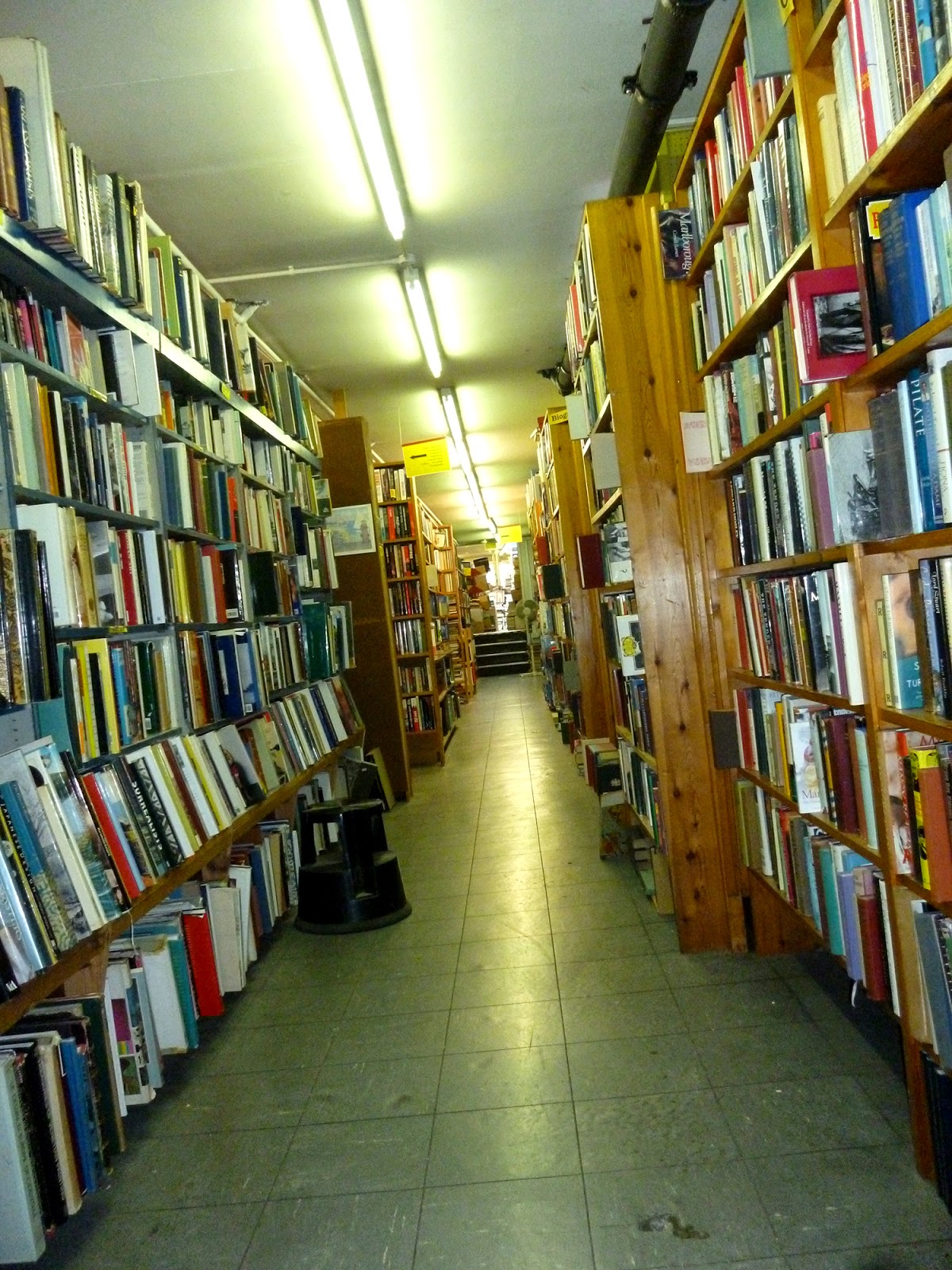 I would like to spend more time in Kent with less of a feeling of panic about too much to see and too little time to see it in: more reading in boats, less rummaging next time.

But you holiday memoirs are soooooo interesting. They take ages to read properly as we all end up following links, making notes on places we would like to visit, people we ought to ow about and following up on leads on all sorts of things.
Thanks for sharing. I think you need to have weekends away all over the country as you seem to find all the interesting places! We would all be following you around like groupies!

Hey, there's nothing wrong with a good travelogue! I remember wanting to go to Sweden after reading about that holiday you had. We thought about Kent a couple of years ago as I wanted to see Dungeness and Derek Jarman's cottage etc etc but a friend put me off and we changed plans. What you have reminded me is that you can have a good holiday at home. Did you plan the places beforehand or trust to luck that you'd find them? I was reading a book about Peggy Angus the other day, on loan from a friend,so I wish I'd seen that exhibition. Despite the overload on the 'keep calm' front it sounds like it was a good holiday though!