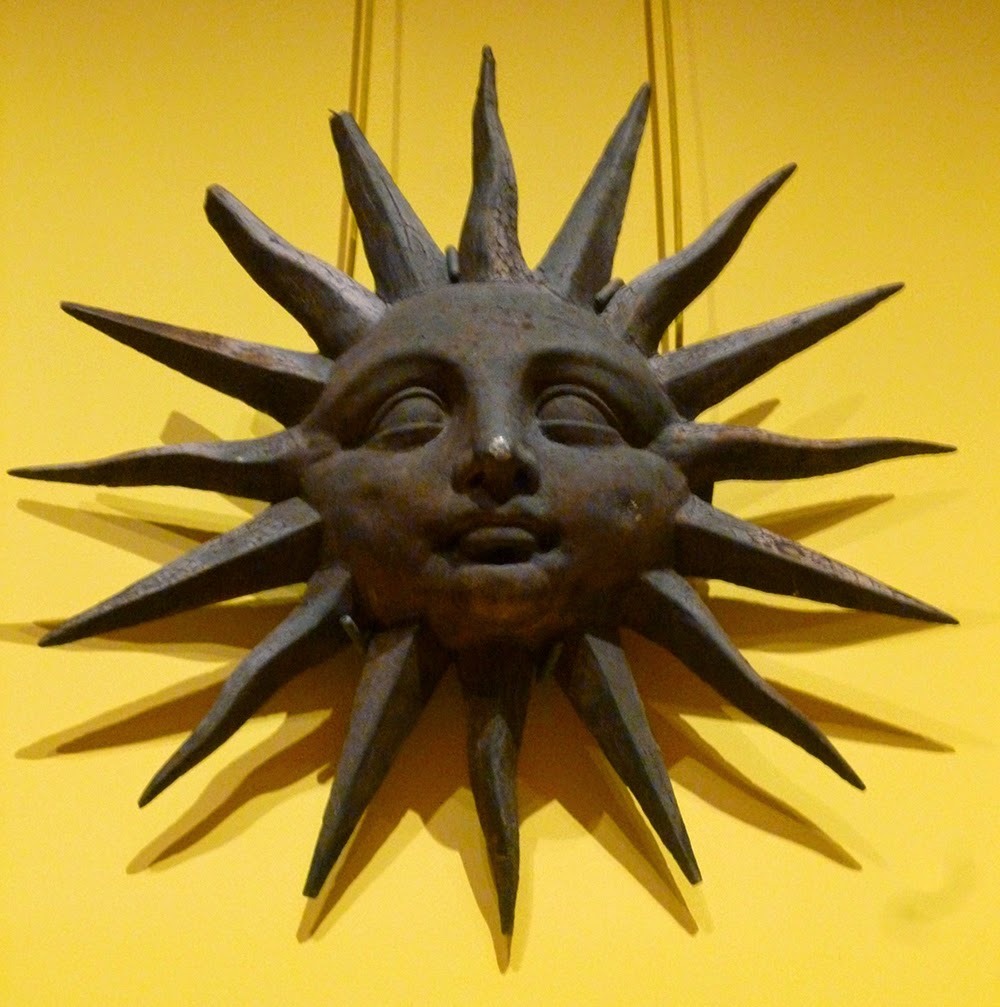 It's already just over a week since I waited outside Tate Britain for the doors to open and let me into the British Folk Art show. I arrived early because I was meeting a friend at the Royal Academy Summer Exhibition at 1pm and wanted to have the maximum time possible into which to fit the folk art beforehand.

In the event I needn't have worried as the show wasn't nearly as extensive as I'd imagined. Given the absolute mass of objects that must have been available, one way or another, I felt slightly shortchanged -- the tickets are £14.50 if you pay the gift aid bit (I didn't...). 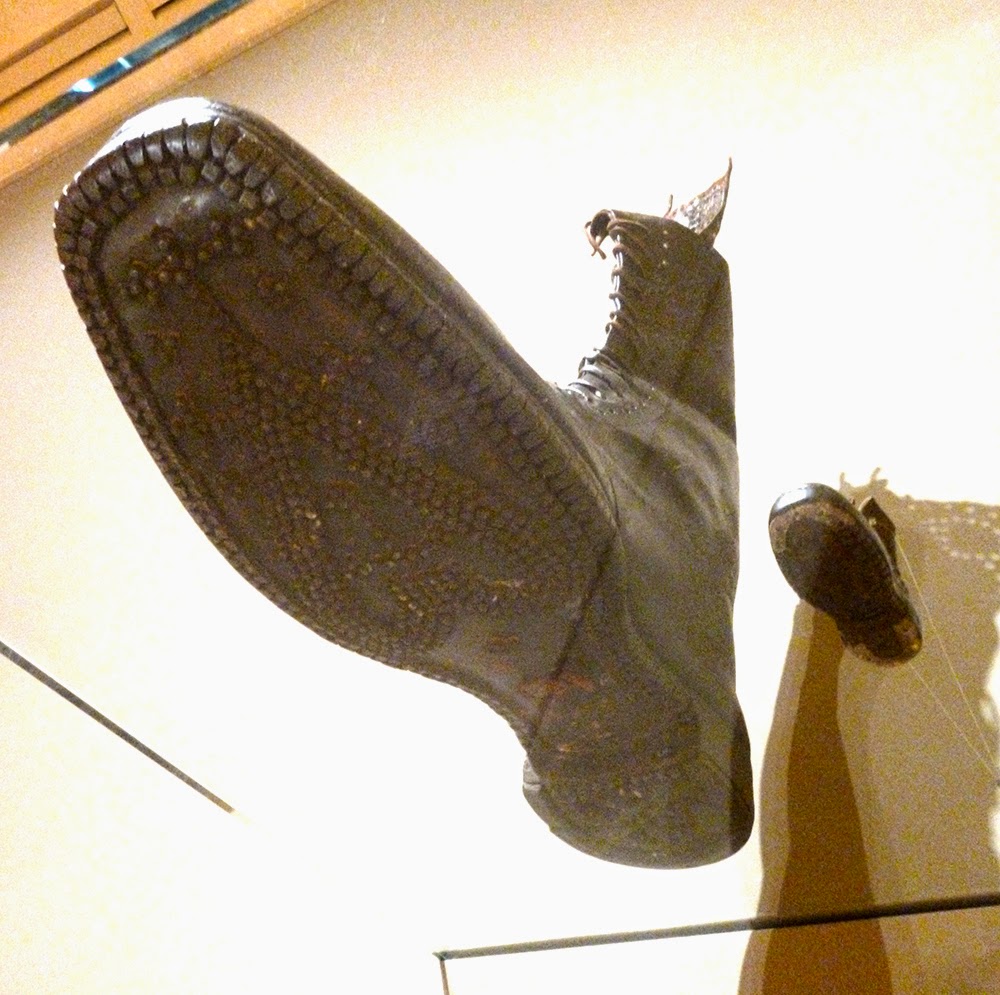 As I had asked if you could take photos in the Phyllida Barlow installation and been told it was okay, I started clicking away at the folk art too, but was soon politely told to stop -- however, here are my few samizdat images: a lovely sun insurance sign, a wooden fish, and a giant boot next to a tiny boot, the huge one made as a shop sign, the little one as a sample.
Here's an even bigger boot: 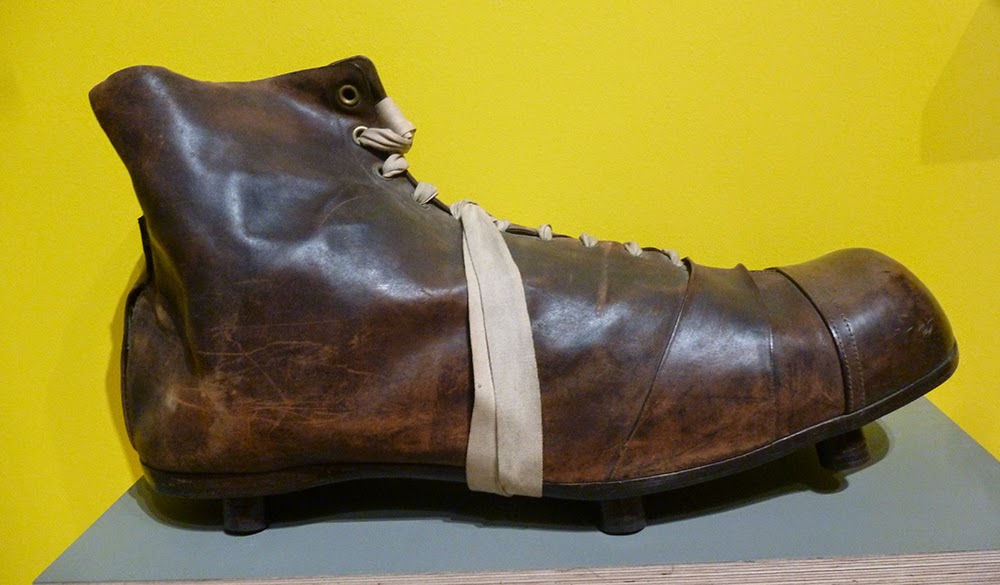 This was a real beauty, about four feet long.

The exhibition took a rather wry view of folk art and while it claimed not to be trying to define folk art (it is most often defined by statements of what it isn't -- not 'proper' art, not made by 'real artists', not valuable, though of course some of it's very valuable now), it went out of its way to score a number of points against various idees fixes of folk art. Such as that many apparently naive and 'natural' artists were actually rather canny self-marketers. Similarly, the show tackles the phenomenon of Alfred Wallis head on. Famously 'discovered' in St Ives by Ben Nicholson and Christopher Wood, Wallis is supposedly the only outsider artist to have crossed over into the 'academy', and to have been taken seriously as an artist (with prices to match). This has supposedly been because of innate talent that was spotted by Nicholson and Wood -- but the show tries to demonstrate that artists of a very similar bent to Wallis abounded, even those who shared his love of ships and harbours are quite easy to find, leading us to the conclusion that Wallis was just lucky.
'Folk' artists are just as keen to make a living from their art as trained artists, and one example in the show is that of Walter Greaves who was establishing himself as a naive, self-taught artist when he was taken up by Whistler. Whistler's influence on his protege's style is so overwhelming as to be almost comical. Greaves went from this ( 'folk' art style):
to this:
in just a few years. He was even accused of plagiarising Whistler's work -- a view with which it's possible to have some sympathy.
Elsewhere, the show had lovely patchwork, ships' figureheads, corn dollies, objects decorated with broken pottery mosaic (apparently called 'boody' in the north-east but that's a new name to me), genuine items mixed in with things such as leather Toby jogs (looking like old boxing gloves) made in the late 19th C and early 20th C and aged in an effort to give them a patina of authenticity -- the message here was that folk art became very popular between the end of the 19th century and up to about 1930, during which time the massive increase in demand was met by a wily supply of fake folk art -- so beware the grimy relic of times past, it may not be as venerable as it seems.
When I got home, I thought about my beloved bits and pieces of broken pottery ware and my ratty old patchwork quilts: I value them so highly because they have such strong imprints of their makers on them and so they speak to me of real people in much the same way as the old photos I love so much. Somebody made these things and now I'm their keeper and I like that. I'm not bothered about their monetary value. 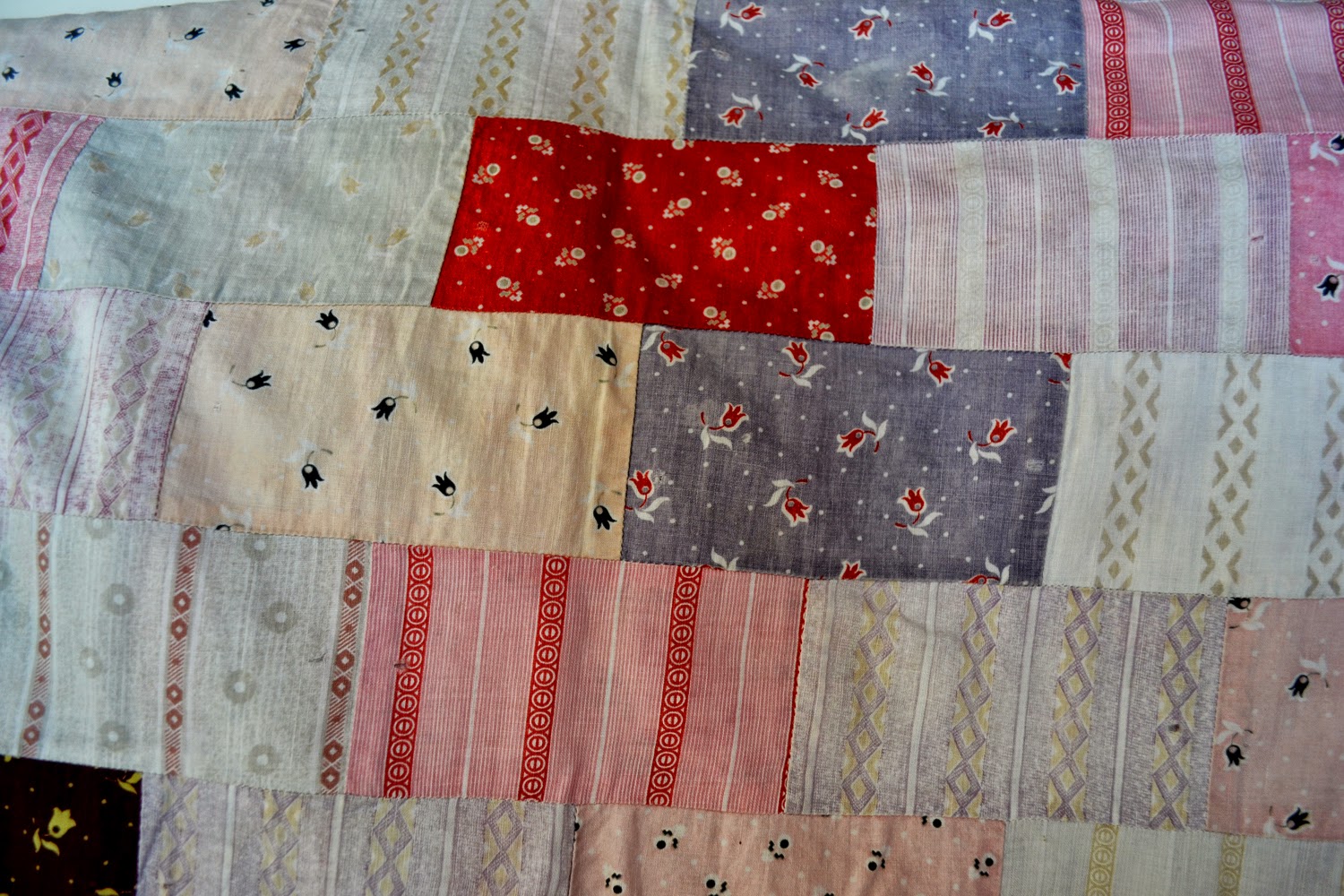 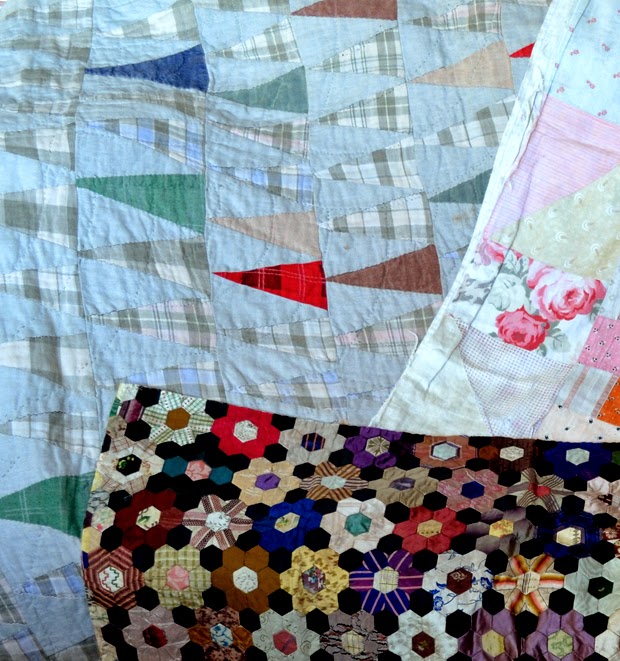 In years to come, I may even be feted as a folk artist myself -- you never know. This is a cigar box covered in pipe-lighting spills that I made when I was a teenager -- oop North we'd sit around t'fire, cutting an' gluin' spills while the barmcakes warmed -- or something. The inside is patchwork which has stayed horribly bright as it's been protected from light and dirt all this time.

I was on a mission to make the smallest patchwork ever made. I regret to say that I actually wore this pouch thingy round my neck. It was the Seventies. The other thing was for stamps. Quite tiny, really. And nicely grubby. 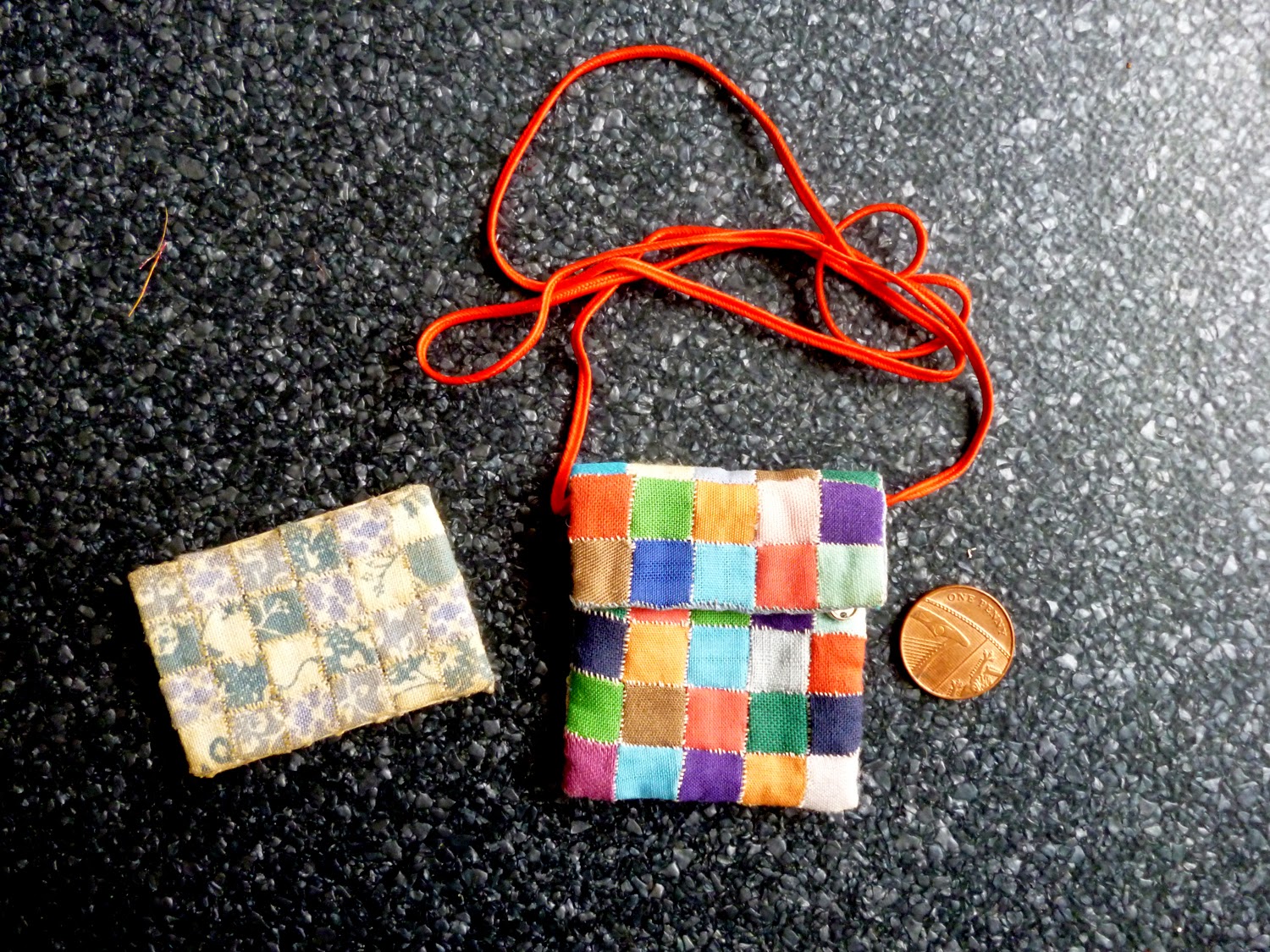 Your box with the patchwork inside is delightful. I wish I'd made something that good as a teenager. Or as an adult!
Interesting about the exhibition. I was wondering whether to splash out on a trip to London to see it, but I wondered if it might be too much of the sort of thing I've seen before. Sounds like that might be the case.