"These associations" -- I've been Tino-ed 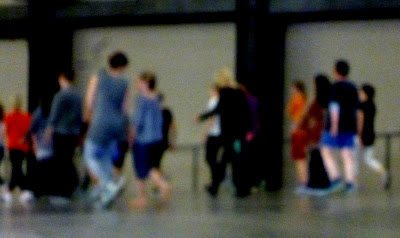 On Tuesday I went with my daughter to see the Damien Hirst show at Tate Modern. I didn't really want to see it, to be honest, but D is doing an Arts Award, one part of which is to write up something you've been to see. Damien's pills and sharks and butterflies seemed likely to provoke responses.
As we were walking towards the ticket desk to get our tickets, down in the lower level, I suddenly sensed, without really seeing it, a kind of collective movement. There was no extra noise, but a definite sense of intention. People were striding down the slope towards the Turbine Hall. Quite a lot of people. I felt excited -- 'Is it a flash mob?' I hissed at D. I was very much hoping that all these marching people were going to break into song. Even an impromptu performance of 'Thriller' would have thrilled me.
Still watching to see what might happen, we went to stand in the ticket line. Just then a woman of about my own age came up to me and launched into an account of how her grandmother had given her a purple suede mini-skirt forty years ago and how it had empowered her. She stood right in front of me and stared into my eyes. It was very disconcerting to be addressed at random in this way and held captive by the narrative. I felt an incredible sense of obligation, that, as always, I should be polite and listen. But at the same time it wasn't a normal interaction. I didn't know what it was but I tried to signal to D to catch it on film. I think I mouthed 'Film it!' at her, but was too polite to speak over the woman. By now she was saying that she had recently given the purple mini-skirt to her own daughter or granddaughter (not sure which -- it was hard to take it all in as I was too busy trying to process what sort of incident I was now part of). D didn't film it!
The woman came to the end of her story and wheeled away, joining the marchers again. By now they had been up and down the length of the building a few times and were running round in circles, following a leader, I think. Who the leader was was hard to work out. 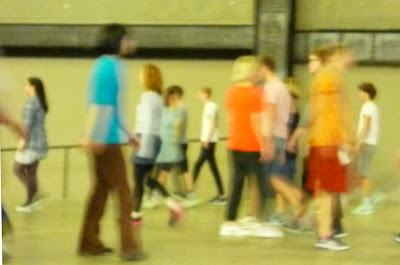 We watched for a few minutes longer. By now I had decided that it must be some sort of happening laid on by the Tate, although I had no idea what. You could see other visitors were being stopped by people from the group and spoken to intently. I wondered what stories they were being told and whether they were more interesting than 'my' story, which I hadn't really liked. The experience of being buttonholed and given a story, whether I liked it or not, was very strange and I guess that's the intention. It isn't an entirely 'fair' interaction because the person on the receiving end doesn't know the 'rules' of the game, and they don't seem to be encouraged to participate, to ask questions, to tell a story in turn.  In a way, you are 'assaulted' by the story -- but at the same time you feel special, privileged to have been singled out, for whatever reason, to be the receiver of this unique moment.
Later on, at home, I discovered that it had been the first day of the latest Turbine Hall 'installation'. The group of people (or similar groups) will be marching and running and telling stories to people every day until October 28th. I had a particularly intense experience of this 'artwork', which is titled 'These associations' and devised by Anglo-German artist Tino Sehgal, because I knew nothing about it beforehand and had to find a way to respond to it whilst immersed in it. It was quite provocative, but not really as 'dangerous' as the Director of Tate Modern has proclaimed it: "the most complex, difficult and dangerous project we have ever put into this museum". One is taken by surprise, discomfited, possibly entertained, but not threatened or even asked to do anything other than look and, possibly, listen. I felt I would have liked to be part of the group, marching down the slope and back again, running round. I started to think about what stories I would have told people. Maybe that's enough.
Reviews have started to appear: Guardian, Telegraph.

Holiday report parts 2 and 3 will follow soon.
Posted by Jane Housham at 10:08

Is that an agressive installation do you think? I remember being 'accosted' by a (mad) woman in the early hours of the morning in New York. She came up to me and started screaming at me ... slightly different from your experience, but similar in a way, in that it wasn't invited or expected or 'normal'.

I'm not very comfortable with situations which are purposefully designed to make me uncomfortable. That's a very first-world, safe, privileged way to view the world though.

Love the whispered, 'Film it!'!

I'd have been like you Jane with a rictus smile on my face, being polite but all the time thinking this is looney tunes. I think I might have preferred the flash mob. What a shame it wasn't one !.... and the verdict on Damien Hirst? Does the lack of an exhibition report speak volumes?

Hope and I were at Tate Modern last week (for the Munch and Hirst exhibitions) and nothing as exciting as that happened to us! I'm sure my reaction would have been very similar to yours.

Is it me... how is making people feel uncomfortable in this way considered art? I really don't get it!

It made me feel uncomfortable reading about your discomfort......... Having said that, it would be interesting to see the difference between reactions once word gets out what it is all about!

Fantastic! From now on you will never know whether the nutter at the bus stop is genuine - or an artist (or quite possibly both).

What would have happened if you had retorted with an intense, skirt-related story of your own? How long would your accoster have put up with you?

I imagine that what these things confirm is that most people, when confronted by an irritating monologuist, will listen politely and wait for them to go away!