Before my holidays are gone for ever -- Part 1 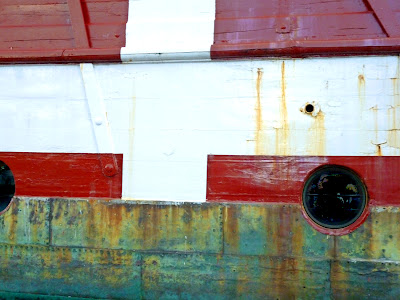 Woaah, it feels strange stepping back onto my blog after a fairly long hiatus. Sorry for the silence. I can't really blame the fact that I've been on holiday, as that was only two weeks out of quite a few more than that. But it's the desire to do a holiday post that has actually delayed my return because it's just so daunting.
I have over 500 holiday photos, most of them really poor, and they have to be waded through and weeded out. And I want to write about the holiday in some detail so that I have a good record of it, but it all takes sooo much time. Still... here we go. 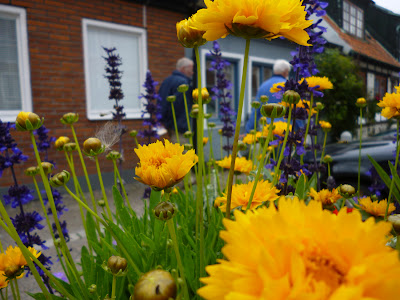 The above two photos are my visual clues as to where we've been: a chance version of the flag of the first country we went to (seen on the side of a boat) and blue and yellow flowers for the other country (in a planter there). Have you guessed yet? Not too difficult really: Denmark and Sweden. 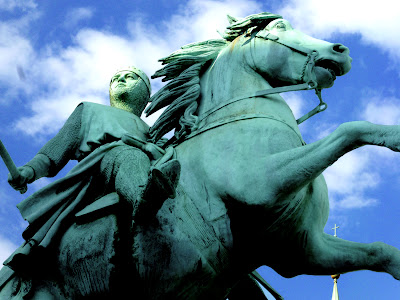 We flew to Copenhagen, the brevity of the flight bringing home just how close Skandinavia is to us in the UK. Copenhagen was founded in the late twelfth century by the dashing chap above, Absalon, who combined being a bishop with being a warrior in a way that seems entirely unfeasible today. 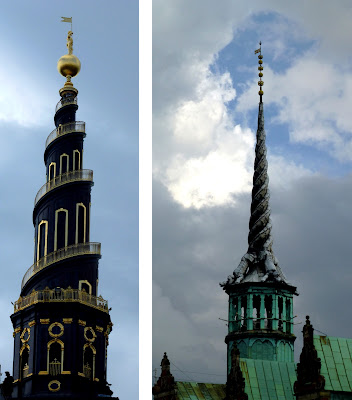 Based on a very fleeting acquaintance with its history, Copenhagen's golden age seems to have been between the mid sixteenth century and the mid eighteenth century. The buildings from that period still give the city its flavour, particularly the wonderful spires which dot the skyline. My two favourites are above. The one on the left has a spiral staircase up the outside of it that you can climb up (alas, we didn't) and dates from 1747 (Church of Our Saviour). The twisted spire on the right dates from 1640 and was supposed to show four dragons with their tails entwined, but as no one knew what dragons really looked like they were modelled on crocodiles. This one is on the roof of the beautiful old Stock Exchange building. 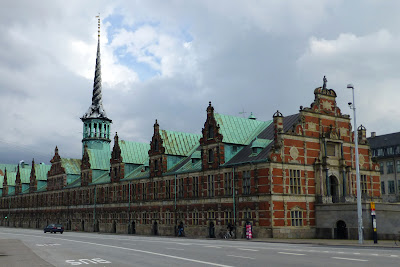 We felt very relaxed as soon as we arrived in Copenhagen. It was very laidback and we hadn't done any of our usual slightly obsessive planning of what we wanted to do. We just set out from our hotel and wandered. We soon found ourselves at Nyhavn, the old canalside street full of cafes which is really the heart of the 'tourist' centre but it didn't feel tacky, just friendly and welcoming. We went down into the sunken ground floor of what seemed to be a really old pub/restaurant for something to eat and, feeling the Skandi-love, I decided to have the herring buffet. Ten or twelve different 'ways with herring'! And just some new potatoes, bread and radishes to leaven the herringness. 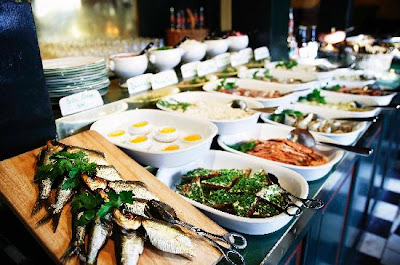 I did enjoy my gigantic plate of fish but now that I've had it once I don't think I'll ever need to have it again. Under all the various sauces, it was very much still herring.
Over the course of our three days in Denmark we had a lovely, relaxed time just pottering about. It's a city I now know I want to go back to, because there's a massive amount to do but you would need to have the energy and determination to do it, travelling out of the city to various museums and interesting satellite towns as well as hunting out all the cool stuff in the city itself. There is so much great architecture to see, for starters. The building I most regret not going to see is Grundtvig's Expressionist church: 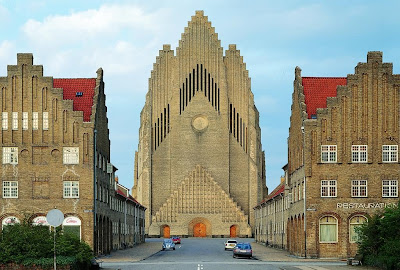 Closely followed by the Royal Hotel, designed in the Sixties by Arne Jacobsen. Now a Radisson Blu hotel, you can visit Room 606, which is the only room still furnished with Jacobsen's specially designed furniture: 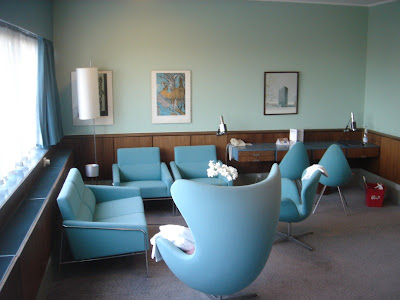 On a whim we jumped onto a canal boat cruise and thus got to see some fantastic new buildings (the new National Theatre, the new Opera House, the new National Library, a super-trendy floating hotel which I would like to stay in one day) and some beautiful older ones too, particularly the canalside area of Christianshavn.We also saw an MA art show at the Nikolaj Tower, a decommissioned church which made a brilliantly gothic art gallery: 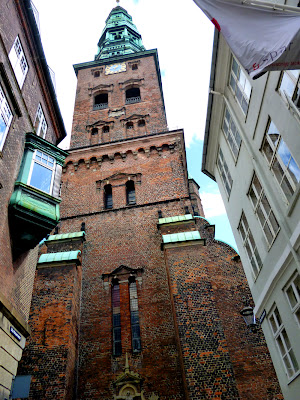 There was art to be found all over the city, even underwater. This spooky merman and his seven merchildren gaze up from beneath the surface of the canal, imploring their human wife and mother to come back to them: 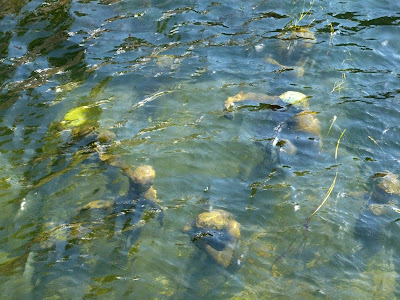 And I also liked this sculptural maze (easy to cheat, though): 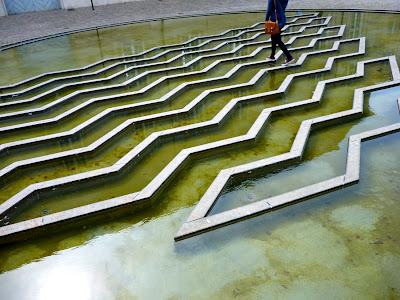 We loved Norrebro, the district to the north-west of the city centre, which has streets of great vintage shops, and also the boho University district. We also went to the Danish Design Centre and saw a good exhibition about new materials. 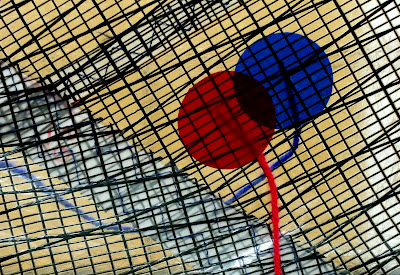 Of course, it wouldn't be a proper trip to Copenhagen without a visit to the Tivoli Gardens, which I had been repeatedly urged to go to by my Dad, who thinks they are heaven on earth. They were very nice (but my idea of heaven on earth is to follow, in part two of this blog) and the buildings reminded me a little of the Festival of Britain back in 1951 (a very good thing): 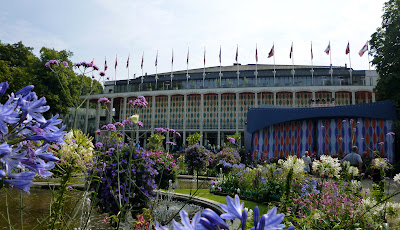 It felt very safe and our kids were able to go off to the rides while we had a nice lunch.
During this lunch we started talking to a Danish lady who told us that our visit coincided with the 'three days for Greenlanders' when lots of attractions in Denmark (or possibly just in Copenhagen) were free for citizens of Greenland, which, you may remember from that episode in Borgen, has a slightly difficult colonial sort of relationship with Denmark.
On our last morning in Denmark we walked in search of Christiania and went too far, finding instead the handsome old military barracks which have been redeveloped to give a home to new enterprises and also the national film school, drama school and art school. We were a little taken aback to see a naked couple swimming in the river, but also pleased because they were like a little symbol of Scandinavian freedom and enlightenment. Good for them. 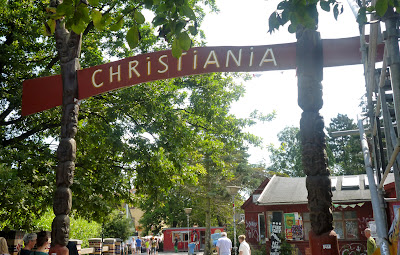 Christiania is a self-declared 'free state' within Copenhagen, mostly famous for openly selling drugs. We were just curious to see it but only stayed for about ten minutes as it felt a bit paranoid and sinister. There were a great many signs everywhere forbidding photography, and I don't suppose the drugs on sale are any freer from dodginess and misery up the supply-chain than anywhere else. It's pretty amazing (to us from the uptight UK) that such an enclave is tolerated, but perhaps the city think it somehow practical to corral the hippies and dopedealers there -- not all of them, obviously, but a fair number -- and practise a kind of vigilant tolerance. I think there are signs that the authorities may try to close it down at some time in the not too distant future. A great set of photos from inside Christiania by Maja Daniels here. 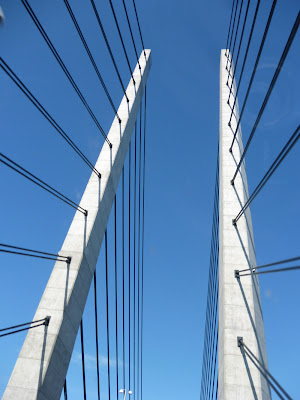 This first leg of our holiday was over (apart from a last, farewell bounce on the trampolines set into the pavement just by our hotel) and so we got a taxi to take us to the train station. But when the driver found out we were going to take the train across the Oresund Bridge to Sweden, he offered to drive us right to the door of our hotel in Malmo. We had so much luggage that, after thinking briefly about how much it was going to cost, we sagged back in the upholstery and said, 'Yes please'. So it was in grand style that we crossed the beautiful and famous bridge, humming the theme tune to The Killing as we went.

Tune in next time for Malmo and Lund in Part Two... (Here's a little taster) 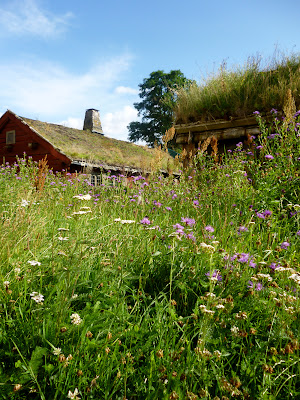 A smorgasbord of delights Jane (I know, naff reference) and the usual detailed travelogue which I love to read. I thought I'd heard that Copenhagen was expensive but whatever, it looks good and the pictures - the fraction of the 500 you've shown us - really whet my appetite for more. Looking forward to Malmo and that cottage holiday....

Such an interesting post - I had to laugh at the giant plate of herring, in all its guises :)

The merman and children are wonderful, if rather spooky.

Bring on part two - this was wonderful!

Thanks so much for the encouragement, you three most steadfast blogfriends -- really appreciated. Jane

Oh, I know just what you mean about getting back to the blog.

Loved the photos and reflections on Copenhagen. Have you ever looked at the blog Copenhagen Cycling Chic? It's a great blog for cyclists. I look at it with envy, not only because cycling is so embedded in teh transport system, but because the women always look so fab on their bikes. Not sure I'll ever be wearing stilettos on my bike though.

So glad to see you back blogging, and as ever, your explorations are fascinating. I love the places you visit when you travel - so much more interesting than the usual tourist trails. You have the coolest holidays ever!