I've been pretty invisible on my blog recently but I haven't been idle. I don't have too much time around the edges of my job, so I've been trying to use it more productively. I've been continuing with what's turning into a series of paintings of people being intruded upon in cars and other vehicles. First there was Charles and Camilla getting mobbed on their way to the Royal Variety Performance. Now I'm edging closer to the painting that is inspiring this whole project, Richard Hamilton's 'Swingeing London 67 (f)'. I've been back to some of the original paparazzi photos of Mick Jagger and Robert Fraser handcuffed together in the police van in 1967 and have painted my own version -- the first of several I'm planning to do, all different. I painted this one in black and white, which is a good challenge.
I've also done this one, which is smaller scale, in sepia tones. I like the image because you can actually see the camera taking the picture reflected in the car window.
Third is this little painting which is the first in what will be a short series of sunny skaters.
I recently joined the countywide artists' forum (Hertfordshire Visual Arts Forum) and it is already proving valuable as they email through lots of opportunities to submit work to exhibitions. Some of these are really tantalising, some less so.
I am very happy to be able to report that my friends Ben Fletcher and Karen Pine liked the portrait of themselves that they very kindly commissioned me to do. The whole thing was highly enjoyable. I started off feeling that I needed to find out a little more about Ben and Karen to inform whatever approach I was going to take. As they're both psychologists, I thought it would be interesting (and fun) to turn the tables on them and do a psychological 'experiment' on them. I devised a questionnaire and printed out three copies. They had to fill in one copy each, separately, seal it up in an envelope and then complete the third one together. The idea was to explore individuality vs coupledom with a view to making that a theme of the portrait. Obviously it wasn't a serious 'experiment' in any real sense but the answers they gave me were genuinely fascinating, revealing an incredible closeness between the two of them. My original idea was to do a painting of the two of them, a single image, but split across two canvases. Each of them would dominate one of the canvases but there would be a strong pull between the two halves as they would naturally make up one larger picture. However, when I went to visit Karen and Ben to do more research and take some photos, they told me, in the nicest way, that they were hoping I'd do something other than a painting... Yikes! This turfed me out of my comfort zone but turned out to be a good push in another direction -- directions, even, as I ended up making two pieces for them.
The first is a montage constructed inside an enamel dish. The main individual elements are painted in soft pastel.
The second piece isn't figurative but nonetheless represents Ben and Karen. It's a set of five perspex drawers (from the 60s, I think), about 18 x 12 x 18cm. Each drawer contains objects relating to an aspect of Karen and Ben's personalities or their life together. 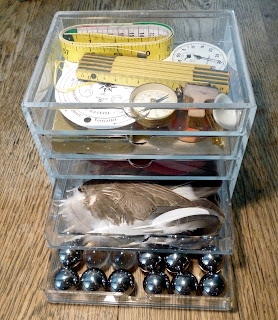 It was very exciting, not to say nervewracking, showing them how I had portrayed them, but they could not have been more positive. It was unbelievably thrilling when they liked both pieces. I won't forget that feeling for a long time. 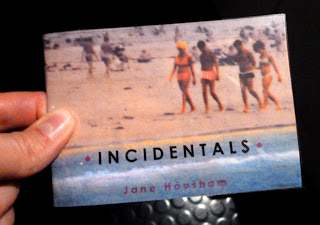 The last thing I've made recently is a completely redone version of a little book I made to go with my explorations of old postcards. It's called 'Incidentals' which refers to the people who are captured on picture postcards without their permission. 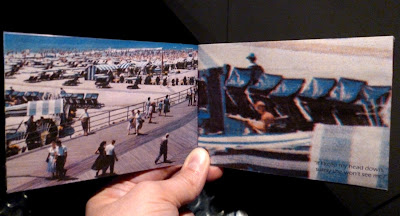 It's just struck me that it's a little bit like an arty version of Where's Wally. You get the full postcard and then a 'hidden' (or just small) person or persons, plus an imaginary monologue of what's in their head/s. It pleases me anyway. I could spend my whole life delving into the world of old postcards. 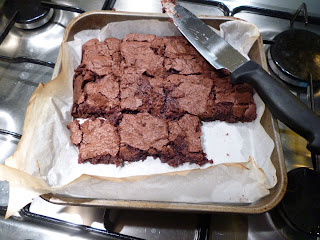 Final final thing to catch up on is that Dora and I finally made Scandinavian Kitchen's recipe for Kladdkaka and it was absolutely delicious. It looks like brownies and it is similar, but more chewy and with the slightly different flavour from the Scandinavian cocoa powder. Highly recommended, as is the Scandi Kitchen blog.

I'm stuck into another 'inside the car' painting now, featuring Danni Minogue...

wow, Jane, you sound buzzing with work. I love the "portraits" the telling of a life through objects. I am sure you have seen the book by Leanne Shapton, an auction catalogue of the artefact of a relationship. I am just creating a series of pieces about objects trying to understand the power of a personal object ( but failing at the momnet!) Cheltenham Illustration prize is based on amulets this year. It will be good to see what comes out of that.
Keep up the good work
joanna

Hi Joanna -- yes, I liked that Leanne Shapton book although I think the idea appealed to me slightly more than the realisation of it in book form, but it was a difficult thing to pull off. Amulets is a good topic for illustration, I think. Good luck if you're entering. Jane

Jane, These images show what an all round talent you have. I love these paintings and they are so, so good. You may not have a job with much room around the edges but I'm tempted to say give it up and go professional. You are seriously skilled. I'm hoping one of those opportunities you mentioned leads to a wider audience who will realise this as well and snap your stuff up!

It's hard to keep the flow going when you have to do it round a job, but you show it is achievable.

I love your paintings, but I especially love that skater! I suppose the kitschness and bright colour just do it for me!

I agree with Lesley - try out some of those art opportunities and see what happens. It's so amazing that you've managed to do so much, on top of a fulltime job (and family!)As ever, I am hugely impressed!

WOW!
I'm nearly speechless how creative and productive you've been and on what a high level!
I LOVE all of it, your car painting series is great and the portraits of your friends are just stunning and amazing.
Barbara
P.S. AND many thanks for all your nice comments on my blog... my hair is definitely more a matter of a engaged hairdresser than anything else ;)

Can I just say that the portrait of myself and Ben (in the tin) looks even better on my wall than it does in your wonderful photograph. It's not only beautifully executed, it captures us perfectly. Also, being a bit wacky, it's very apt.
The portrait in objects, expressed through the little set of drawers, is simply inspired ... it contains all the special elements of our life. Everyone should have one ;) .... thank you Jane x