'Hiccups are indigestible' and other news

You know how retelling your dreams is considered bad taste by many? I hope there isn't a similar unwritten rule about reproducing one's childhood writings. I fear there may be a similar disjunction between the charming appeal of such things to their aging authors and the boredom they induce in others. If so, skip over this post and I apologise for my self-indulgence.
When I was a small child I was very keen on the news, even though it often frightened me (I had nightmares about the Suez Crisis and Aden even though I barely knew what they were). I started to make my own tiny newspapers. The earliest one I've still got must be from when I was around five as the writing is so childish. It's quite disturbing:
There was a major outbreak of foot and mouth disease in the UK in October 1967 when I was five. I grew up in rural North Yorkshire so it was very much a reality there (when there was another outbreak of the disease in 2001 I remember visiting my mum at home and seeing the fires of burning carcases glowing all across the huge view from the top bedroom where I was sleeping).
The front page of another little paper I've managed to keep, the 'Despach' (our local paper was the Despatch) has these headlines: 'A little child got buglared' and 'Another girl ill'. Inside, 'Towns get hungry because of meat' and 'A boy got killed'. 'Town law off agian'. I can't help feeling my parents weren't doing a terribly good job of protecting me from the harsh realities of life.
But today I'm going to 'treat' you to The News Finder, which must date from a bit later as the handwriting is much better. It's such a weird snapshot of my anxieties and interests at the age of six or seven.
The front page lead is 'The Greeks let the seamen they captured go' -- I can't find any reference to this online but this must be something I'd heard in the news. 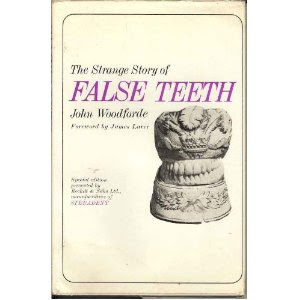 Also on the front page -- swapping the hardhitting impact of a news story in favour of arts coverage -- is a 'book review':
'False Teeth by Audrey Carr' [Audrey Carr was my mum, but in fact this was a real book which she had been sent in her capacity as a book reviewer for the Northern Echo, the bigger Darlington-based newspaper which also published the Dispatch. I was obsessed with this book (published in October 1968) and I remember I also used it as the basis for one of those awful presentations you have to do at school. A couple of years ago I had to clear my mum's house when she moved into a care home and I found the book again so I've got it safely -- in a box somewhere...]. 'This book is stupid, I think, when it says 'Many had a loose tooth and it hurt' because it is obvious it would hurt. I think this book is very Rude - because I do not like talking about False theeth.' Quite so.
Finally on the front page, back to the news: 'Wood cutters are Jailed For cutteing The wrong trees down'. Again, can't fault the judgement.
Page 2 is the full-page ad for Players Cigarette. Page 3, breaking with tabloid convention, is 'Docters Diary: Hiccups'. 'There are lots of cures For hiccups. like holding your breath and counting to twenty or haveing a long long drink. hiccups are indigestible. you may think it Funny but animals have hiccups.' Always informative.
Page 4 is the Editorial -- on 'Shcools': 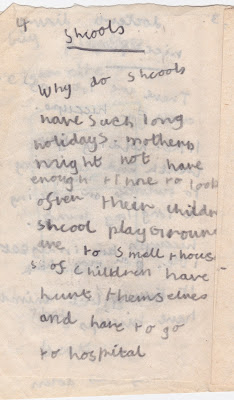 Still a live issue, I think you'll agree.
It's back to the news on p5, the foreign news quite conventionally relegated to the inside pages: 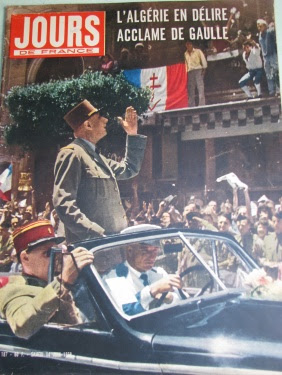 'President de Gaulle Flew to africa on The First of June because the africains are going white. The blue peter hospital trucks are a Great success.' I note the authentic French spelling of 'africains' (I would like to point out that I did go on to do a degree in French, some 10 years later), and also the fact that de Gaulle does seem to have meddled in African politics, in both Algeria and Nigeria, in the course of his presidency, but I don't think he ever concerned himself with this particular issue. Thank goodness I had contributed our milk-bottle tops to those Blue Peter hospital trucks. 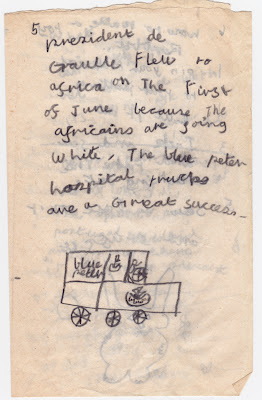 Alas, by page 9, President de Gaulle is not doing so well... 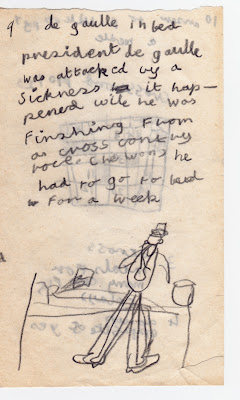 At least he had the satisfaction of victory.
There are more adverts: 'go to Spain There is lots of lovely places like oporto and portugal, Madrid and many others. it is very plesant.'
And a craft feature, which could have come straight out of Things to Make and Do: 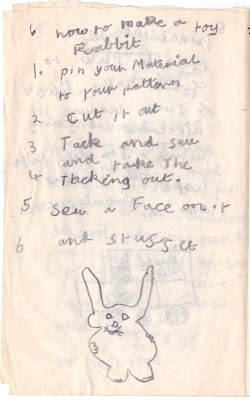 Finally, a first-person account which would not be out of place in the Guardian Saturday magazine of today:
'My worst experece was when someone stupid left our bath running and it overflowed and it covered our carpets wich were pink and blue it was luky we had a kerb and it wasn't a upstars bathroom I nearly covered two of dads pots for he was studying to be a potter but he wasn't cross'.
This is a TRUE story. My dad was doing a ceramics module as part of his BEd degree (he was a mature student) and was making many grim, gritty Sixties-style slab pots which he used to leave in the bathroom to dry out before they were fired. 'Someone stupid' did indeed leave the tap in the bath on a trickle and, who knows how, the bath filled to overflowing and water cascaded all over the floor, causing that week's pots to sag and flop. I'm not sure I ever admitted to being the 'someone stupid' to my mum and dad, but I love how I unwittingly go into the first person halfway through this account. The truth will out. Specially when the News Finder is on the story.

Thank you very much for your indulgence in this post. Have you got any writings from early childhood? I may 'treat' you to 'The Ugly Elf and Beady' soon, a racy story of gnomes and 'buitful. ladies.
Posted by Jane Housham at 10:36

Email ThisBlogThis!Share to TwitterShare to FacebookShare to Pinterest
Labels: de Gaulle, false teeth, how to make a toy rabbit

Brilliant post! And what a polymath you were in your junior years. And straight to the point, no pussy footing around.

We used to do this too, I was 'the editor' and my younger sister 'the roving reporter' ... my parents still refer to us as such from time to time! But I don't think there are any extant copies of our efforts. Instead my mother unkindly kept all of the poems I wrote. Sooo not good.

This is wonderful - if only I was so creative - I have a diary from my early teens, but it consists of "got up..went to school... did homework..went to bed." Not even any exciting gossip.

I loved this post! No phone hacking necessary for these insightful articles, and I love the cigarette ads. How un-pc! But then we also had candy cigarettes, didn't we?

Can't wait for 'The Ugly Elf and Beady'!

This was a charming post Jane. I used to make "magazines" when I was a child and I'm sure I still have one that dates back to when I was about 10. Might have to dig it out.

This was a charming post Jane. I used to make "magazines" when I was a child and I'm sure I still have one that dates back to when I was about 10. Might have to dig it out.

An absolutely wonderful post and I envy you the fact that you still have so many pieces of "you" from childhood. We always had to get rid of stuff each time we moved and I think that is possibly why I let go of so little as an adult....

I would dearly love to see "The Ugly Elf and Beady" published here...

Whilst I was reading this - with a huge smile on my face - I couldn't help thinking that the die was cast when you were six Jane. Your ability to seek out and question the unusual was there all those years ago and now I understand even more the eclectic mix of stuff that your mind takes in, absorbs, sifts and throws out. I only remember one story I wrote about a hunter 'with eyes as big as cannonballs'.... not a bestseller! Bring on the Ugly Elf and Beady I say!! PS If you ever find that book on false teeth could I borrow it?

Thank you so much for showing these gems to the world, and for your entertaining commentary! They are fantastic. You were really extraordinarily well-informed for your age, although I agree that you do sound a bit worried about what was going on in the world.

It made me remember an incident from when I was about 7 or 8. A boy in the top class of our junior school was murdered, and his body found on the local golf course. I knew him a little, as my brother was in his class. I was fascinated by the coverage in the local paper, but I also remember feeling guilty about reading it. Perhaps my mum had said I shouldn't read it, or it just seemed a bit wrong to be interested in someone's death. It's strange how children's minds process the news.

I don't think I have any writing from that age. I'm not sure I did much writing for fun before my teens - more likely to be drawing, I think.

This was a delight. You were obviously born to be a blogger.

I have very little from my childhood. I guess we just did not have the room to keep stuff. But I do remember being fascinated with the news and reporting, and had a great game called "Scoop" with which you could assemble your own newspaper.