All the photos in this post were taken by my Mum. Above is a view of Richmond (Yorkshire) from the field just along from our house which she knew as 'Clinky Field', a very old name, I think.
The field meant a great deal to her. It was where she played as a child as she lived in a house opposite the one I grew up in. 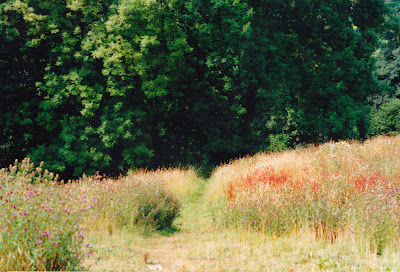 Clinky Field was just a bit of rough land, really. 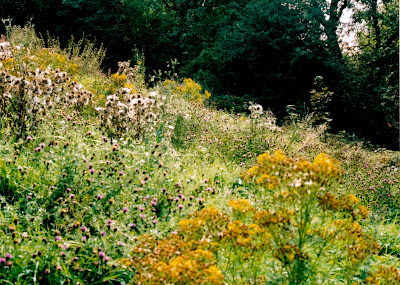 The best thing about the field was that it led into the woods. 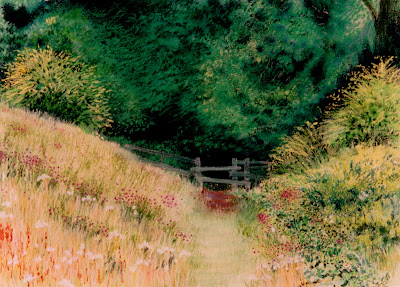 This is one of my Mum's paintings of the stile into the woods.
The field also had a lovely view over the whole of the valley:
The view of the town from the field is famous: 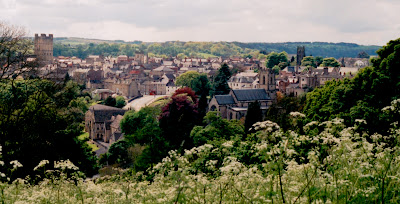 You can see the castle keep, on the left. Just below that, and slightly to the right, is the old grammar school, now part of the comprehensive school where Mum taught for over 25 years and where I went too. In the centre of the picture is St Mary's Church.

My mum died on October 15th and is now buried in St Mary's Churchyard. This is where she said she wanted to rest and she will be for ever overlooked by Clinky Field. She had been very unwell for several years and when she died it was genuinely a merciful release. I'm glad she is now in such a beautiful place that she loved so much.


Here are two short pieces written by my mum which I read out at her funeral. The first is something she scribbled in her ever-present notebook, in the late Eighties, about her memories of catching the train home from her London college to Richmond in the Fifties:
“Going home to the best place in the world, Richmond.
First Darlington – the sense of belonging begins. Running to the far end of Platform One where the Richmond train is already waiting and obviously longing to be off. Not many passengers for Richmond, one or two men in khaki en route for Catterick, perhaps.
A bit scared at first since someone told me that, for a short distance, the line is the one on which the London trains come in to Darlington. Always afraid of being in a crash.
The danger, if it ever existed, is soon over, and we are clickety-clacking along the single track to Richmond. We pass through Eryholme – was that a place or just a station? – Through Catterick – Bridge, not Camp, flattened now after the explosion of an ammunition train in 1944. Here’s the level crossing at Broken Brea – I’ve never known how to pronounce ‘Brea’.
Then the music of the train changes. We are trundling through Abbey Wood, an ancient wood near the banks of the Swale, and the rhythm of the wheels becomes loud and resonant as we cross the iron bridge on which as a kid I used to place pennies to be pancaked.
The brakes squealing as we slow down for Richmond Station. Joyfully dismounting and dragging out my big battered suitcase, inhaling the smell of soot, stone, trees, river, tarmac.
I haul the case up through the churchyard, gasping in alarm when the white owl swoops down on me – I had forgotten it lived there. Up to our house in Frenchgate. No matter what time of night or morning I arrive, the front door is always unlocked. Into the warmth and light, the smell of apples, Erinmore Flake tobacco, freshly baked pastry.
My heart swells with happiness. I am home.”
The second piece is simply a page from Mum’s commonplace book, written in 1979.
“This is going to be a page of things I like, just to remind myself. When I try to think of what I specially enjoy, I can never remember. I will be able to now that I have written this. Here goes:
Dolls Houses; Children’s books; Robert Redford; Tin toys; Auction sales; Old houses; Books; Tiny things; Laura Ashley; Expensive new magazines; Old Christmas cards; Paper toys; Extravagant musicals; London; Paperchase; The Victoria and Albert Museum; The Tate Gallery; Secondhand bookshops; Antique markets; Miniature books; Milk; Disaster movies; The Sunday Times; The Yorkshire Dales, especially Wensleydale; Trent Park; Mother’s cat; Celandines; Hogweed; Novels by John Fowles; Books about the Bloomsbury Group; Clothes; Winchester; Honeysuckle-lined hedgerows; Country walks; Trees; George Gershwin; Cole Porter; The Modern Jazz Quartet;  Porgy and Bess; Katchachurian’s Second Piano Concerto; Rex Whistler; John Piper; English gardens; Soaking in hot baths; the colour Green; Collage; Cambridge; Sussex; Silence.” 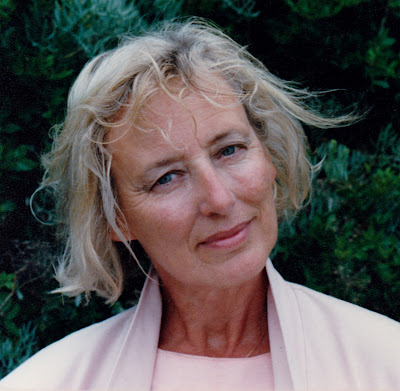 Such a moving post about your beautiful and talented mother.

In her photography, her paintings and her writing, her personality and intelligence shone through. How proud you must be of her and to be her daughter.

Jane - THere have been lots of poems and memories on blogs in the last few days but this is so incredibly evocative of place and person melding together. How wonderful that your mother valued her home town so very much, and how well this permeated her work. Thank you so much for opening a space for us to share her uniqueness.

So lovely to get an insight into your mother. What a talented and beautiful person she comes across as. I particularly love her written piece about her journey home on the train.

I think I would have liked your mother a lot. Lovely words about her, beautifully put.

Beautiful post, Jane. It must have felt very right to return her to somewhere she loved so much. Her writing is so evocative, and her paintings are lovely - I can see where you get your talents from!

Such a beautiful tribute to your mum Jane.

Jane - What a lovely tribute to your mother. I too grew up in Richmond where my father was Treasurer to The Richmond Rural District Council in the 1960's .
I attended Frenchgate School (Oglethorpe House) where your mother lived for a while, I believe. I loved Richmond and still do of course even though we live in Devon now. However I don't think that anybody loved the town more than your mother and that comes through crystal clear in her writing. What a talented lady your mother was. I have read and enjoyed her books they always evoke happy memories of places, people and shops etc. that were so much a part of my life. I have also learnt recently of her talent in conveying the magic of Richmond onto canvas. It is so tragic that such a bright and gifted lady should suffer that awful illness. I is so lovely that she is back home for ever in her beloved Richmond. David Holdsworth

Hi Jane
Just discovered this lovely tribute to your mum. I knew her when she taught me and other lucky pupils at northallerton grammar school in the fifties and early sixties. She was a lovely and inspirational teacher and lots of fun. Then, a bonus! We reconnected at a reunion which I helped to organize way back in 87 and became friends. I would call in at her home on Maison Dieu when my daughter was swimming at Richmond pool and also on other occasions. I introduced her to a pal Terry Clapham who she helped with his music and writing and Terry was the one who told me the sad news of her death. We both came to the funeral to hear your special words. I will never forget this very special lady, who spoke often about you. Yours, Derick Hare