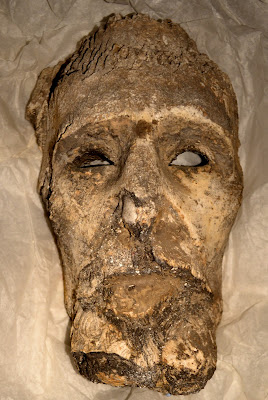 This macabre head is sitting on my desk here, in the nest of tissue paper it's been wrapped in ever since I brought it down from my Mum's house, after the house had to be sold. I thought I was going to be able to tell quite an interesting story about it, but, as it turns out, the story doesn't tie up as neatly as I'd hoped. 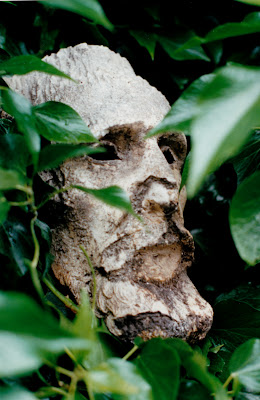 The head used to hang on the wall in Mum's back garden. Above is a photo of it in amongst the ivy. Below is a shot of the garden,  which was long and narrow and very overgrown. 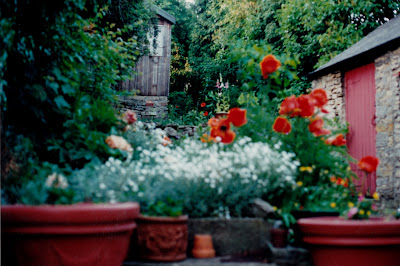 One day, years ago, the head disappeared from the garden and was presumed stolen. Mum was upset because she'd had the head for a very long time and it had been weathering and eroding over the years and had reached the stage of looking like ancient stone (in fact it's just made of plaster). But she had no idea who could have taken it, until a few months later, when she looked up at the front of next door's house and saw the head, hanging on a bedroom wall, with an eerie glow coming from its eyes and mouth! Stunned to have discovered the missing treasure, she got up her nerve and finally asked for it back. It was somehow returned -- no sanctions were taken -- and the head returned to its place in the garden. Unfortunately, in order to turn it into a spooky lamp, the miscreants had drilled the mouth out and this altered the appearance of the head considerably. But Mum filled it in with some sort of cement and hung it in the garden again.
The next part of the story was going to be the best bit... I thought I had remembered Mum saying that the head was the likeness of one of her lecturers at art college, John Green, and that it had once been considerably larger than it is now, but had become eroded down to just the face. I had a vague memory of a photo of myself as a small child, standing next to what I thought must be the original head.
First of all I thought I'd track down John Green, but I haven't been able to identify him at all, unfortunately. Then I hunted through all the piles of photos in my drawer to find the remembered snap: 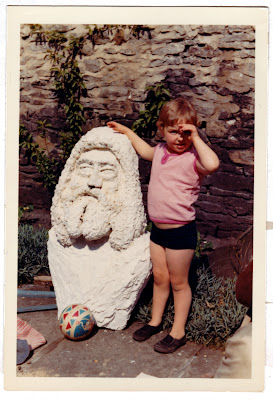 Here I am, aged about three, standing next to the head. But it's NOT the head, I now see immediately. This is some other head, standing in our old garden. Whose head is this? Is this one John Green, or the other one? And what happened to the giant head? Who made the heads? I guess I'll never know. I wish I could make this tale more satisfying but some things are just not known.
Posted by Jane Housham at 16:53

That's so interesting and the heads are so cool. Your mum should have given the neighbour a drubbing for nicking the head though!

PS Thanks for good wishes x

Your mum certainly had a thing for faces, didn't she?! Great story, shame you can't track down a picture of Mr Green.

And isn't the mystery part of the pleasure? We dug up a small alabaster figure in our garden a couple of years ago. What exactly is it? Why is it there? How did it get there?

Not sure I'd like to live with the first head - very creepy irrespective of its story... I wonder if there's some Dorian Grey figure out in the world, remaining young as the head deteriorates... As for the second head, that's just plain odd!

Memory plays tricks with us doesn't it? What a strange tale, especially the neighbours stealing the first one. Sounds like they needed it for some satanic ritual in the bedroom. Question is: what are you going to do with it now?

I wonder what excuse the neighbours gave for having your mum's ornamental head on their wall? I would have loved to have been there and listened to that conversation!

I would have dragged that neighbour, by the ear, to the local constabulary.

I do love a good mystery... and how strange the neighbour's pinching it in the first place.

I think that was plenty interesting! Like everyone else, I am outraged at the neighbours behaviour! The heads could be of the same man, with his strange bifurcated beard. When I first looked at it, the first photo looked to me like some kind of real, withered head - scary!