Greetings! Sorry it's been a while. Back with all my collecting zeal now with some photos of our Christmas tree and its bouncing baubles. 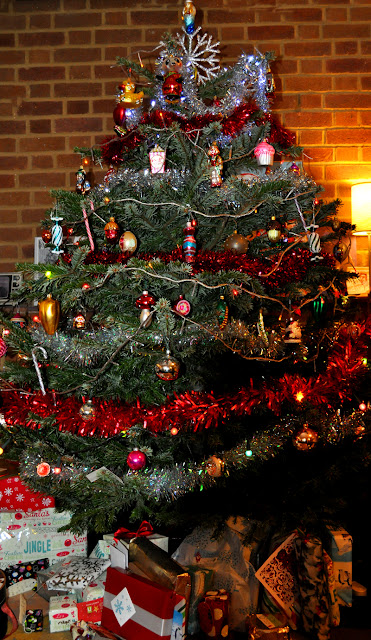 Well, of course we couldn't just have a tree and hang a few nice but random bits and pieces on it. No, we had to make a collection out of it. And, not to set the bar too low, we decided (this is about fifteen years ago when we first got married) that we would collect glass Christmas baubles of edible things. 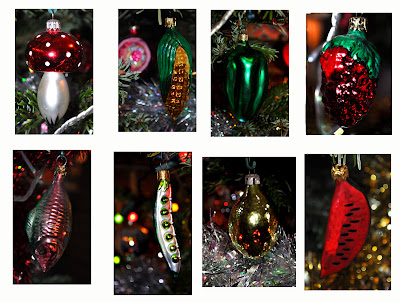 I've just looked up 'bauble' on the internet and have completely overwhelmed myself with exciting things about baubles that I never knew -- more of which in a moment. But the first exciting fact is that when glass baubles were first manufactured, they were made almost exclusively in the shapes of fruit and nuts to mimic the real fruits and nuts that were traditionally hung on 'Christmas trees' (I don't think they were even called Christmas trees at that point). Strings of popcorn, candy canes and biscuits in the shape of stars and hearts were also used to decorate the trees (and, of course, still are). So our 'edible' collection, without our even being aware of it, went right back to the earliest days of Christmas baubles. 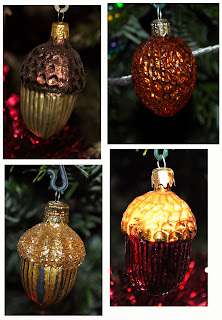 The golden walnut, above, is one of the oldest decorations we've got. Most of the others are modern. 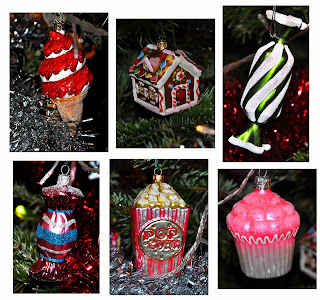 There are plenty of lovely sweet things to tempt us -- I always want to eat the cupcake.
But as the years went by -- and we tried to buy one or two new baubles for the collection each year -- not only did the choice of edible baubles get a bit slim, but we began to be beguiled by ever more amusing objects of different kinds and these became irresistible. 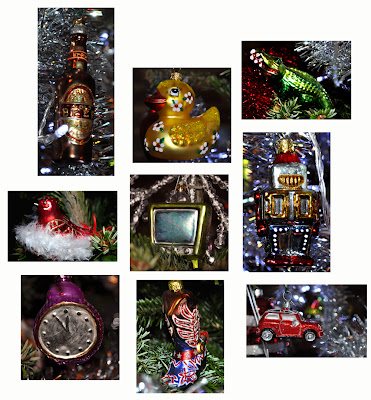 We're particularly fond of the little telly because -- you've guessed it -- we collect little tellies (a future post, for sure).
Christmas decorations are one of those things that families accumulate and that cause gushes of nostalgia each year as they come out of their boxes again. Especially if they've survived their year in storage. Sadly, each year we usually find at least one decoration has broken. It's lovely if families pass their collections down the generations. I've inherited my mum's decorations which she, in turn, had got from her granny, so some of them date back to the 1930s.
When I was growing up, I'm afraid Christmas wasn't a time of wonder and magic, but just a bit of a chore for the grown-ups, or so it seemed. We had a sad little tinsel tree that got more and more naked every time it was dragged out and the decorations hung rather wanly on its bare wire branches. My mum handed over her decorations to me with something close to relief a few years ago and chucked the horrible silver tree away.
The best thing about Christmas now is re-reading the accounts she wrote of dreadful Christmases past -- the year she forgot to soak the 'mushy peas' that my dad insisted on having with the turkey, the year my dad insisted on our having a duck instead of a turkey and she didn't know how to cook it (blood ran out of it when the knife went in). You'll sense a certain theme here... We fall about laughing when we read them now but it wasn't so great at the time. Anyway, here are a few of the old baubles: 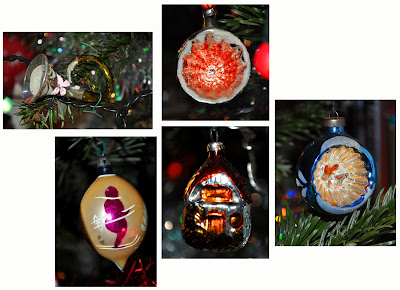 The ultra-modern ornaments are amazing and seem to get more elaborate every year. Do you like these slightly exasperated-looking pandas?

My absolute favourite decoration makes me feel a little bit guilty every time we hang it on the tree -- it doesn't seem quite right, and yet there are devils in quite a lot of European Yule celebrations, I think:

Well, as I say, I got very excited when I looked into baubles online. A bauble wasn't a decoration at all, originally, but 'a stick with a weight attached, used in weighing a child's toy, but especially the mock symbol of office carried by a court jester. This fool's bauble was a baton terminating in a figure of Folly with cap and bells, and sometimes having a bladder fastened to the other end. Subsequently it became a term for anything trivial or childish. More recently the term means a virtually worthless decorative object.' (Wikipedia).
Woah! Even putting aside the question of why it was necessary to weigh children's toys, why did the jester's stick have a bladder fastened to it? Ah -- to 'belabour' people with, ie, to beat them about with. The figure of Folly at the other end of the stick wore a crown and asses' ears. How did this word come to mean a glass trinket? Who knows? The etymology of the word may come from Old French meaning something like 'beau-bel', that is 'pretty pretty', or from 'bebe' -- or even, in some online dictionaries, from Babel, the mythical tower/city of non-communication.
Then I discovered that glass baubles first started to be made in the little German town of Lauscha, in the Thuringian forest between Erfurt and Nuremburg. This town had been a glass-blowing centre since 1597 but the market for inkwells, bottles and oil lamps, their traditional wares, was diminishing, so enterprising artisans started making glass fruit and nuts. The trend took off and soon the baubles were being exported to England (which bought into Christmas in a big way after Prince Albert decorated a tree for Queen Victoria) and the United States (helping to make F W Woolworth's fortune).
Now in Lauscha they have a museum of glass art and many glass design studios. In early December they have a big Christmas market where you can buy the latest bauble designs. My head is swooning with the things I've seen on their websites just now. These dogs are my favourites: 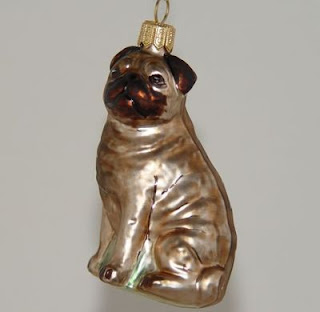 Check out this link for loads more adorable doggie baubles. And more nice ones here.
My head is spinning with bauble wonderment, so I will leave you with a big warm bauble of Christmas love.
Posted by Jane Housham at 13:02

Love all of your incredible baubles - infact a couple of years ago I had the same idea but scip it because it would be too expensive or we would have quite a poor tree the first 20-30 years. 20 km from here in Rüdesheim their is a shop only for christmas decoration, they have ALL sorts of baubles, you would probably go crazy.
And thank you for your "celebrating schedule" - your cranberry sauce wont go out of my head since then. xx Barbara

Oh my goodness! What a glorious collection of baubles. Have a wonderful Christmas.

Blimey, so much bauble info! I LOVE shaped glass baubles. We got some great ones when we went to Vegas. I'm especially fond of our Christmas Chilli, and the Christmas Gherkin. We also have a robot and an astronaut. I'd love to get more, but they're quite expensive, aren't they? I love your devil!

So what are you up to with the dolls faces? Can't wait to see

They're all fabulous. And look at all those presents under the tree!

I love how you started collecting baubles with a theme ... our tree's a bit mish-mash. Though I suspect you can buy better baubles in Europe and England than you can here in Australia.

Thanks for the information of the bauble. I reaslly enjoyed reading about them.

And isn't is incredible the influence parents have on their children ... even the unspoken in soaked up by little ones and remembered. Being a good parent is the hardest job in the world.

I've got a krampus bauble too, but my ex wasn't very caring when he packed him up & has since lost his horns. I'd love to get another one, yours is in such good condition.