I bought this nice old photograph for £1 from Snoopers Paradise in Brighton, happy source of many of the old photographs I've previously explored on this blog. As with all the photos I've 'investigated', one of the main reasons for choosing it, if not the main one, was that the subjects in it are identified on the back. Much as I like to think I have sleuthing skills, even I can't intuit the names of people in photos without a bit of help. 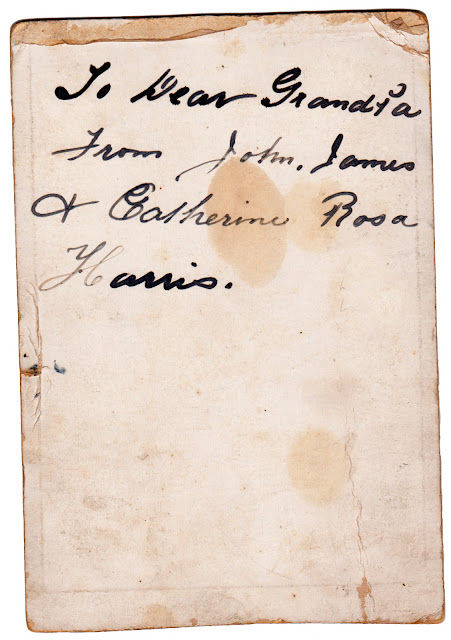 So, from the writing on the back, we know we have Catherine Rosa and John James Harris, who look to be aged around five and seven respectively, perhaps a little younger. They look like nice children and are probably dressed in their best clothes for the photo session -- although you can see that their footwear is a little worn, so perhaps the family were not terribly well off.
When I first brought this photograph home, I thought it would be relatively easy to identify these two, because I assumed they were probably brother and sister, and I had full names for each of them. But as it turned out, I drew a blank -- I couldn't even see any candidates for the pair when I broadened the search on Ancestry to include variations on the spelling of Catherine's name. As I had bought other photos in Brighton which I got a 'hit' with, I set the Harris children aside -- for several years, as it turned out.
Then, just recently, I came across the photo again and decided to have another go at cracking it. New information is added to Ancestry all the time, particularly by people who are researching their own family trees. At first I got nowhere again, and then, for the first time, I noticed that at the bottom right of the photo there's an address -- 62 Rundle Street. The photo card has actually been mis-cut, so that the name of the photographic studio that took the picture is almost completely cut off (bottom left), but the studio's address was still eminently searchable. To Google StreetView where Rundle Street turns out to be a highly developed shopping street in the centre of Adelaide, South Australia. Well, no wonder I was drawing a blank as I had my Ancestry search set to UK & Ireland only!
While the turn-of-the-century buildings have disappeared from this very commercial part of Adelaide now, I found a photo of Fruhling Studios, which had its premises at 62 Rundle Street (corner of Gawler Place): 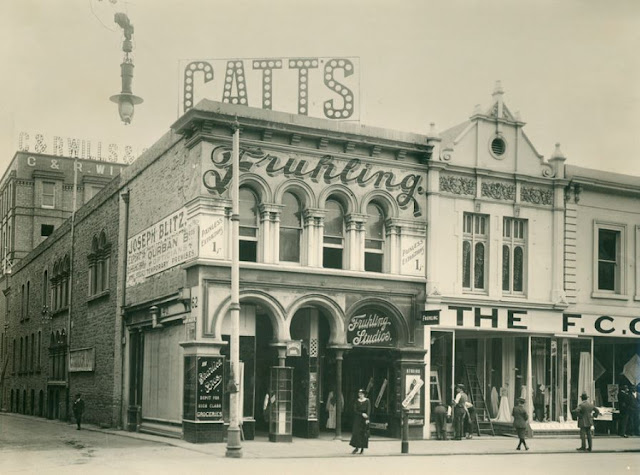 You can just make out the tops of the letters spelling 'Fruhling' on the bottom left of the photo.
And now I soon found the Harris siblings in the Australian records as well. They were both native-born Australians, indeed born in Adelaide: John in August 1893 and Catherine in July 1895 -- so I'm dating the photograph to around 1899/1900. As far as I can tell, they were the only children born to John and Mary Harris who married in Adelaide in November 1891. Mary's maiden name was McGuire and she was also born in Adelaide, but her father, John McGuire, had been born in Co. Tyrone, Ireland before emigrating to Australia. Mary's mother (nee Grant) was also an emigre from Ireland and the couple married in Adelaide in 1862 (Mary was born in 1865 but many of her siblings were born before 1862, so there may be a mistake with the marriage date or they may have left it a bit late).

John and Catherine's father John Harris had been born in Melksham, Wiltshire in 1862. His father, Jeremiah Harris, was a sheep farmer and Methodist preacher who married Rosa James in 1861 (and there's the link to Catherine's lovely middle name -- and possibly to John's middle name too). By 1871, the family had moved to Bysshe Court farm, Smallfield, near Horley in Surrey. On the date of the next census, 1881, John (the children's father) was 19 and living in Reading, lodging with a family and working as a butcher, no doubt a useful trade to have and one that you could carry out almost anywhere.
He was 28 when, in November 1890, he embarked on the 75-day journey to Australia on the steamship Oruba, bound for Sydney with calls at Colombo, Albany, Adelaide and Melbourne on the way. This is assuming I've found the right John Harris in the passenger records:

There is a small question mark over whether this is 'our' John Harris because his age is given as 24 whereas he would have been 28 -- but there is often a degree of uncertainty about ages.

By chance, on the same voyage, the very successful architect and engineer John Harry Grainger was also a passenger, returning to Australia where he had a company (his other claim to fame is that he was the father of the well-known composer Percy Grainger). He had been back to England for a break following the breakdown of his marriage. Grainger was also a very accomplished artist and he painted this great watercolour of the Oruba setting sail on her voyage halfway around the globe:

When Grainger arrived back in Australia he settled in Adelaide -- and so did John Harris, perhaps growing tired of being at sea and jumping off when the ship made port in Adelaide rather than hanging on until they reached Sydney.
John Harris seems to have landed on his feet as he was married to Mary McGuire within a year of his arrival and then his two children were born just a few years after that. I haven't found out much more about him except that he died in 1927, aged 65. It was to John's father that the photograph was sent: Jeremiah Harris, the farmer and Methodist preacher who lived near Horley in Surrey. His wife, Rosa, had died in 1892, which is why the photo is just 'To Grandpa'. It isn't very far from Horley to Brighton, which helps to explain how a photograph taken in Adelaide ended up in a vintage emporium there. Jeremiah died in 1908 and probably never got to meet his daughter-in law or his grandchildren in person.

What of John James and Catherine Rosa themselves? I found grown-up Catherine, married to an Alf Edwards, plasterer, at 90 Campbell Street, in the Collingwood area of Melbourne, from about 1931. The section where no.90 would be has been redeveloped, but I bet they lived in a little house like this one, further down Campbell St: 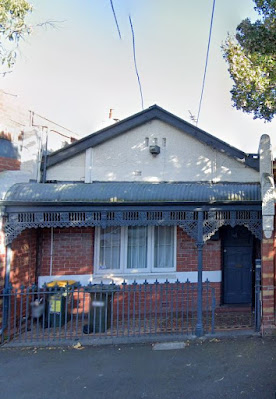 As for John James, he fought in World War I, in the Imperial Camel Corps in Egypt: 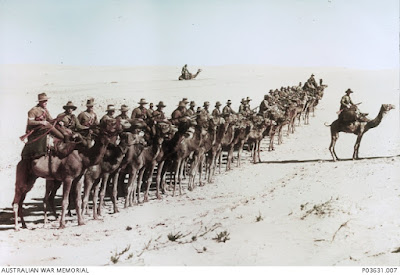 According to his military records (which you can see via Ancestry), he seems to have been hospitalised several times for illnesses such as gastritis but he made it through and returned to Adelaide in 1919. After that, I'm not sure -- there are several John James Harrises in the Australian records. I was quite excited to find a John James Harris who had been in trouble with the police in Adelaide and further afield in the late 1920s -- to the genealogist, such events always cause excitement. In September 1929, he illegally cut down some sandalwood along with an assistant, Frederick Lambert:

Then, one month later, the same John James Harris was in trouble for not paying Lambert's wages. He and his wife and three children left Adelaide (on the lam?): 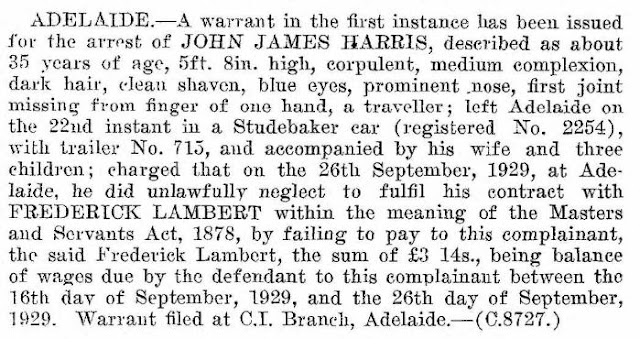 However, I'm not 100% sure this is our John James. There's an ambiguity over his age (possibly a typo in the first report -- our John James would have been 36 in 1929), and the description is somewhat at odds with this one, from John James' sign-up papers in 1915 (which I'm much more confident about -- for a start, the age is exactly right, down to the month):

Maybe it is him? But now he has fair hair and skin. His eyes are sometimes described as blue and sometimes as grey... You'll have to decide for yourself. Is this the grown-up version of the little boy in the photo, who perhaps found life hard after he returned from the traumas of the first world war?
The lives that can unfold from one random photograph are so fascinating. 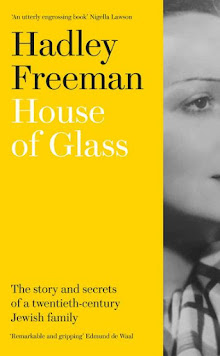