Kate Dobson -- a stranger in a photograph 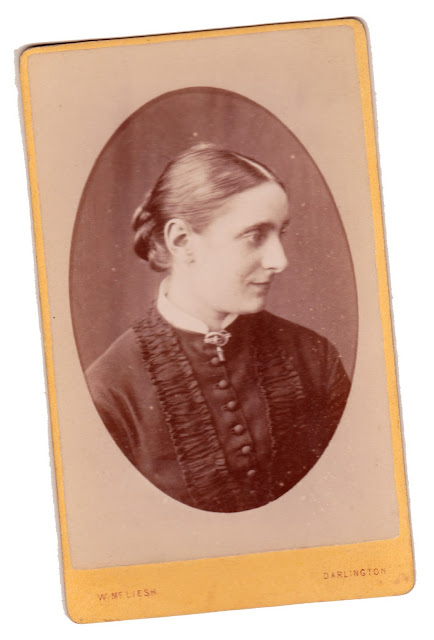 I haven't 'investigated' any photos for ages, so at the weekend I dipped into the drawerful of old photos that I got from my Mum and picked one more or less at random -- this is it, above. It was the second one I looked at and I stuck with it because it had a name written on the back. 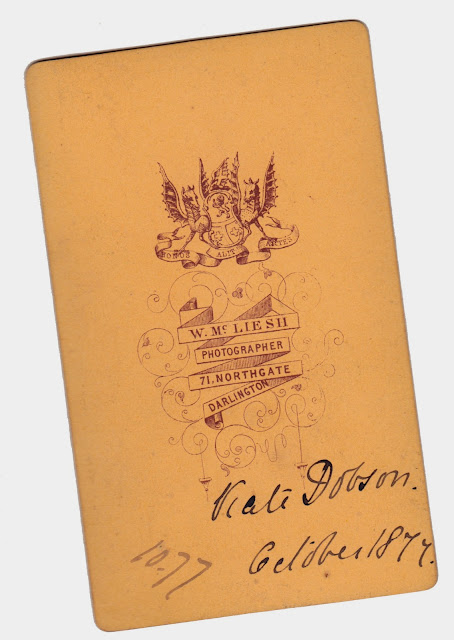 The name was Kate Dobson and there was a date, October 1877.
I should say that these photos weren't particularly valued by my Mum. When I was sorting out her house, they were in the damp stone outhouse in the garden, in rotting cardboard boxes and covered in black smuts. I think they must have been inside something she bought at an auction, a writing box, perhaps, and she wasn't that interested in them but kept them anyway. But they weren't family photos, just random images from who knows where. Mum lived in Richmond, Yorkshire.
So the idea was to find out, if possible, who Kate Dobson was. In the photo, Kate looked as though she was in her early thirties, I thought, so I searched on the Ancestry website for Kate Dobsons living in or near to Darlington (where the photo was taken) and born around 1845. It didn't take too long to identify her as Kate Mary Ann Dobson, born in late 1853. That makes her actually only twenty-four in the photo. I think she looks a little careworn for her age, don't you?

I knew I had found the right Kate Dobson because she had filled in the 1911 census return as head of household and her handwriting was identical to that on the photo.
What else could I find out about Kate Dobson? She was christened Kate, rather than Catherine, which seems relatively unusual. Her full name, as you can see, was Kate Mary Ann Dobson. She was born in Leyburn in Wensleydale, a lovely little Dales town not far from Richmond. 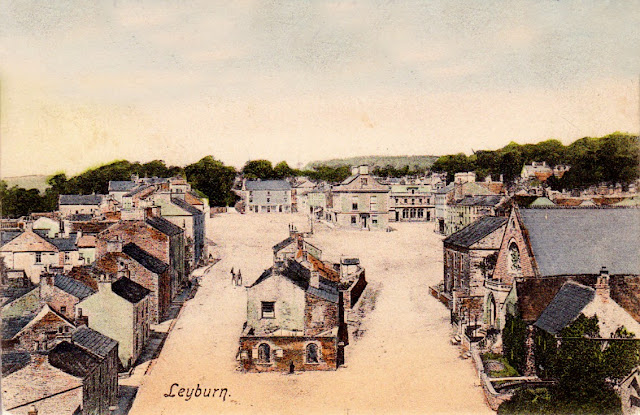 We used to go quite often when I was little, to Tennant's auction house, which is still going strong and is very highly regarded. Also, my singing group (Bel Canto) went to compete in the Wensleydale Festival music competition which was held there.
Kate's paternal grandfather was Matthew Dobson, a 'landed proprietor' born in 1774 and resident of Grange Hall, Heighington, near Darlington, where his family had lived since at least 1628. Grange Hall was registered as a non-conformist place of worship in February 1780 so the family were almost certainly non-conformists. In August 1810 Matthew married Martha Stapylton, a native of Leyburn, and they moved to Grove House, in Grove Square, just off the main marketplace. That house was built in 1757 and is still there today. It's a bed & breakfast place now. Matthew and Martha had eight children and Matthew doesn't seem to have had to work, probably living instead from the income from his 'land and houses'.
Their eldest son was Ralph Stapylton Dobson (born 1813) and he established himself as a wine and spirit merchant in Leyburn. He married a local girl, Mary Ann Fryer, in late 1844 and they had seven children, of whom Kate was the fourth. The wine and spirit shop must have been very successful because the family moved from one house to another, over the years, starting at 'Railway Villa' and ending up in 'Brentwood House', right in the marketplace, and he was able to afford to send his sons away to Bishopton Close school near Ripon. Two of Ralph's three sons ended up taking over the business. Ralph often served as a juryman at the Assizes, along with other respectable citizens.
But there was a major falling out between Ralph and his siblings over their inheritance from their mother. The Yorkshire Post carried a long and detailed account of a court case heard in Lincoln's Inn in December 1868. It's so complicated that I can't understand it properly but it comes down to Ralph being accused of stealing his mother's will (and, possibly, destroying it?), so that he could inherit half of her property rather than having to take only a one-sixth share. He was accused of being 'a villain and a perjurer' by the lawyer representing two of his sisters. He said, in court, that 'up to the present time he had lived respected in the neighbourhood in which he was born [...] and he was now charged with a deliberate fraud upon his aged mother, with a view to injure his sisters and deprive them of their just rights. If, therefore, the jury decided against him, he would go forth from the court a disgraced, ruined, perjured man.' Unfortunately it took the jury just fifteen minutes to decide against him.
Kate Dobson was fifteen when this calamity struck the family, and who knows what effect it had on her. Both she and the youngest child of the family, Maria Margaret (born 1859) remained unmarried and they seem to have become inseparable. They continued to live at home for many years until, eventually, in the 1891 census (when Kate was 38) the two sisters had moved to Richmond (my home town) and were lodging at Clyde House at the top of Frenchgate. Kate was earning a little money as a music teacher and Maria was listed as a 'fancy wool worker'. I'm not sure how much money there was in that. Their next door neighbour was a widow, Jane Whitelock, who was 81 in 1891 and seems to have been supporting two daughters and two granddaughters on the income from running a lodging house. Perhaps this inspired the two sisters for, by the next census, in 1901, they had set themselves up as lodging house keepers at 30 Maison Dieu, Richmond, right opposite the house I grew up in.
I don't think it can have been terribly profitable because, ten years later, when Kate was in her late fifties, they had moved again, to 22 Windsor Terrace in Darlington, which, being near the railway line (as far as I can work out -- it's gone now) was something of a come down. They only had one boarder. No further censuses are open to scrutiny, so I haven't been able to track them any further.
Kate and her sister Maria are buried together in Darlington West cemetery. Kate died in 1933 and Maria in 1936, both spinsters. When I discovered that they shared the same gravestone, I felt sad that they had only had each other for most of their adult lives and also in death.
That's all I've been able to discover about Kate Mary Ann Dobson -- oh, apart from the fact that Kate trained as a first aider in 1891. If anyone is researching her as part of their family tree, they're welcome to copy her photo. As they lived opposite the house I grew up in (and, actually, that tall red-brick house partly visible in the photo above was my great-grandmother's house where my mum spent most of her childhood), Kate and Maria feel like neighbours now. I had no idea when I pulled Kate's photo at random out of the drawer that she would have lived so nearby.
Posted by Jane Housham at 01:20

isn't that special? so respectful to look up a stranger and talk about her life. like anyone in life carries a story and anyone's life is important. n♥

I just stumbled upon your blog today. I was impressed by the picture and the research you did to discover who she was. I am into genealogy and I love family stories -- mine and others.
I have you bookmarked now so I will be checking back often.
Kind regards
Pat

I'm such a sucker for your photo investigations!

Kate's story is so interesting and how amazing that she lived in the house opposite the one you grew up in and next door to your great grandmother!

She lived to a good age, as did her sister.

Great research; and what a fascinating story you've uncovered. Quite remarkable that the photo brought you right back almost to where you found it. Did your mother know of the connection, I'm wondering? And yes, Kate does look somewhat careworn.